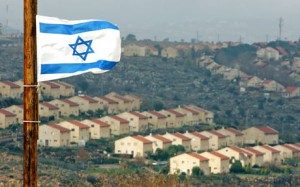 When America goes to war or plans one, they march supportively in lockstep. They ignore the worst of imperial crimes. They endorse Israeli occupation harshness.

Jewish rights alone matter, they believe. Settlement construction is legitimate, they suggest. It's no obstacle to peace, they claim. Further construction won't prevent a two-state solution.

Instead of telling readers what's important to know, they defile responsible journalism. They turn truth on its head. They support wrong over right.

They believe might is right. They endorse Jewish supremacy and specialness. They're comfortable with belligerence, persecution and land theft.

Israel has a divine right to settlements, they suggest. On January 1, their editorial headlined "Overheated rhetoric on Israeli settlements," saying:

The reaction to recent settlement construction plans is "counterproductive" and overheated. It "reinforces two mistaken but widely held notions: that the settlements are the principle obstacle to (peace), and that further construction will make a Palestinian state impossible."

Conflict resolution is impossible without a reliable partner. Palestinians never had one. They don't now. Post editors understand. Instead of explaining, they conceal what what readers need to know.

They compound bad commentary with lies. Settlement policy changed after Oslo, they claim.

"Mr. Netanyahu's government, like several before it, has limited building almost entirely to areas that both sides expect Israel to annex through territorial swaps in an eventual settlement."

She learned the futility of negotiating with Israel. It demands. It yields nothing. It imposes its will forcefully. Official policy is do  things our way or else.

Two-state solution supporters "evoke the (notion) of 'land swaps.' In effect they're saying, 'The larcenist has succeeded. Let's respond to his bad behavior on his terms."

Conflict resolution is more distant today than 20 years ago.

Their resources are stolen in the process. Palestinian rights are entirely spurned. Israel's all take and no give.

They're still not discussed. Without resolving them, "no solution, one or two-states, will succeed."

Palestinians and Israelis live on the same land. Their populations are roughly equal. Israelis are heading for minority status. Jimmy Carter, Desmond Tutu, and others call Israeli policy apartheid.

Conflict resolution is impossible. Israeli recognition of Palestinian self-determination "remains a mirage." Both sides "don't have another twenty years to waste."

The only viable resolution is one state comprised of Israel and the Territories. Nothing else will work.

A single state for Jews and Palestinians in theory at least resolves most intractable issues.

Their rights matter as much as Jewish ones. International law principles are inviolable. They demand ending decades of occupation, colonization and apartheid.

They require treating Arabs and Jews equally. Resolving decades of conflict depends on doing the right thing. There's no other way.

"The exaggerated rhetoric (pressures) Abbas to make a 'freeze' (conditional) for peace talks."

Expect him to drop it altogether. Doing so will add greater betrayal to his resume. Post editors urge it.

"If Security Council members are really interested in progress toward Palestinian statehood, they will press Abbas to stop using settlements as an excuse for intransigence - and cool their own overheated rhetoric."

Post editors reflect the worst of media scoundrels. They support wrong over right. They ignore inviolable international law. Under the Constitution's Supremacy Clause, it's US law.

Fourth Geneva's Article 49 states, "The Occupying Power shall not deport or transfer parts of its own civilian population into the territory it occupies."

In July 2004, the International Court of Justice (ICJ) ruled:

"Israeli settlements in the Occupied Palestinian Territory, including East Jerusalem, are illegal and an obstacle to peace and to economic and social development."

"They've "been established in breach of international law" on sovereign Palestinian territory.

Jordan Valley territory is vitally important for Palestinians. It has political, cultural, economic, agricultural, and geographic value. It's too valuable to sacrifice.

Likud's platform leaves no ambiguity. Its position on settlements is clear, saying:

"The Jewish communities in Judea, Samaria and Gaza (all Occupied Palestine) are the realization of Zionist values. Settlement of the land is a clear expression of the unassailable right of the Jewish people to the Land of Israel and constitutes an important asset in the defense of the vital interests of the State of Israel."

"The Likud will continue to strengthen and develop these communities and will prevent their uprooting."

They want them deprived of all rights. They want them ruthlessly persecuted and exploited. Abbas supports their agenda. Disingenuous rhetoric belies his complicity.

Palestinians are isolated on their own. Governments able to help do nothing. Media scoundrels suppress what's going on. Israel takes full advantage. It's been that way for decades. Hoped for light at the end of the tunnel remains invisible.