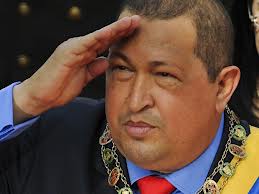 "asked that (I) inform that, according to the recommendations made by the medical team that is watching over his health, the process of post-operation recovery should be extended beyond 10 January of the current year."

"For this reason, he won't be able to appear on that date before the national assembly."

"This constitutes an irrefutable supervening reason to invoke article 231 of the Constitution of the Bolivarian Republic of Venezuela in order to formalize, at a later date, the corresponding swearing-in before the Supreme Court."

"The candidate elected shall take office as President of the Republic on January 10 of the first year of his constitutional term, by taking an oath before the National Assembly."

"If for any supervening reason, the person elected President of the Republic cannot be sworn in before the National Assembly, he shall take the oath of office before the Supreme Tribunal of Justice."

No date is specified. It can happen any time. Dominant PSUV National Assembly members can extend Chavez's absence up to six months. Vice President Nicolas Maduro can replace him for 90 days.

The NA can authorize an additional 90 days. Constitutional wiggle room may permit more.

"President Chavez, this assembly concedes to you the necessary time so that you can get better and recover."

The National Assembly approved Maduro's request. More on Chavez below.

Presidential illnesses aren't rare. Noted US heads of state took ill, became sidelined, couldn't perform their duties properly, or at times at all.

In November 1912, he was elected president. In March 1913, he took office. Few knew his health history.

In 1896, he suffered a stroke. It caused marked right upper limb weakness. Sensory disturbances affected his fingers. For almost a year, he couldn't write.

In 1904, he developed right upper limb weakness. It lasted months. In 1906, he lost vision on his left eye. He had multiple neurological problems. He experienced double vision.

He had severe episodic headaches. They lasted days. Hypertension and atherosclerosis affected him.

In summer 1918, he was frail. He suffered breathing problems. Much worse lay ahead.

On October 2, 1919, he collapsed. He experienced a debilitating stroke. For the rest of his presidency, he remained in seclusion. He was sidelined unable to govern.

Historian John Milton Cooper called his condition "the worst instance of presidential disability we've ever had."

"We stumbled along….without a fully functioning president" for 18 months. Information about his health was suppressed. An official White House statement said he suffered from "nervous exhaustion."

He was dying. Few knew. His top officials and congressional leaders weren't told. His personal physician, Dr. Cary Grayson, said nothing. The public was entirely shut out.

He served two full terms. He hung on longer than expected. On February 3, 1924, he died.

Franklin Roosevelt served from 1933 - 1945. In 1921, poliomyelitis left him paralyzed below the hips. In the 1920s, an enlarged pigmented lesion affected his left eye. Some believed it was malignant melanoma.

In 1944, he was too ill to run. He was advised to step down. In January, he complained of headaches. He was visibly tired. Once he blacked out at his desk. He was gravely ill. He kept it secret.

A state-sponsored assassination ended Jack Kennedy's presidency. Had he lived, his health might have undone him.

At age two, he nearly died from scarlet fever. He contracted measles, whooping cough, and chicken pox. He had upper respiratory infections and bronchitis problems.

His mother called him "a very, very sick little boy." In the 1930s, he began taking steroids for colitis. Complications followed.

In 1947, his Addisonism was diagnosed. At the time, he was told he had a year to live. He was given his last rights.

As a WW II naval officer in the Pacific, he experienced malaria. The 1960 presidential campaign exhausted him.

As US senator and president, his health was kept secret. Few knew what later was revealed.

He had a history of benign prostatic hypertrophy. He experienced prostatis and skin cancer.

In January 1981, he took office. In March, he was shot. Loss of blood alone might have killed him. Emergency surgery saved him. He never fully recovered.

Early in his presidency, Alzheimer's disease symptoms surfaced. They worsened. He forgot cabinet officer names. On a Brazil state visit, he toasted the people of Bolivia. He served two full terms. He lived to age 93.

Other US presidents experienced serious health problems. John Adams was diagnosed manic depressive. James Madison suffered from epilepsy. He had high fevers. It left him "deranged" for weeks.

Presidents are mortal like ordinary people. They carry on best they can.

He's recovering from his fourth cancer surgery in 18 months. He needs more time to regain health. He's getting superb care in Havana.

On January 8, the Havana Times headlined "Chavez to Remain in Cuba under Treatment," saying:

It'll be held outside the Miraflores Presidential Palace. Expect tens of thousands to turn out. Cabello urged everyone to come.

Venezuelans want him to take all he needs. They pray for his full recovery. They reelected him president. They hope he'll fully recover and serve six more years.

He claims "Chavez clinge(s) to life in a Havana hospital." An "intense struggle is under way."

"Cuban-backed ideologues (and) narcogenerals" vie for control. The nation's "future….hang(s) in the balance."

He and other ideologues make this stuff up. They claim split PSUV leadership. If Chavez dies, power struggles and destabilization will follow.

Chavismo is institutionalized. It's unified and resilient. Bolivarianism is part of Venezuela's culture. It's too strong to die. PSUV leaders intend to preserve it.

They respect Chavez's wishes. Before leaving for Cuba, he asked party officials to elect Nicolas Maduro president if he can't serve. It's unthinkable to believe they won't do it.

Preserving Bolivarianism matters most. Chavez called for unity under Maduro to assure it. PSUV leaders will honor his wish if needed.

On January 8, The New York Times headlined "Chavez, Too Ill to Return to Venezuela, Will Be Sworn In Late, Official Says."

Maduro announced it. He "invoked a disputed section of the Constitution that government officials say allows the swearing-in to take place in the future."

His credentials are strong. He's well-respected. He'll rise to the occasion if called on. In 1999, Chavez did as a relative unknown. Maduro and other PSUV leaders won't let Venezuelans down. Preserving Bolivarianism matters most.

Venezuelans "are divided on whether Mr. Chavez's illness means he should step aside," said the Journal. Overwhelming popularity supports him. Scoundrel media misinformation changes nothing.

"At stake are the good of the country and the defense of ethics. To alter the Constitution to attain a political objective is morally unacceptable."

Chavez's illness puts "at grave risk the political and social stability of the nation."

Expect lots more anti-Chavista rhetoric ahead. Dark forces never quit. Expect Venezuelans to have the last word. They reelected Chavez overwhelmingly. They intend to keep him.

They urge him speedy recovery. No matter how long it takes, he's worth waiting for. He's someone they don't want to lose. Hopefully they won't have to.

Note: On January 9, Venezuela's Supreme Tribunal of Justice postponed Chavez's January 10 inauguration for an specified date to be named later.

"As president reelect, there is no interruption of performance of duties."

"The inauguration can be carried out at a later date before the Supreme Court."

The Constitution's Article 231 stipulates it. Vice President Maduro will perform Chavez's duties in his absence. Morales quashed opposition demands for a caretaker president.

Dems Lower Voting Age To 16 In Cities – Pelosi Once Said: