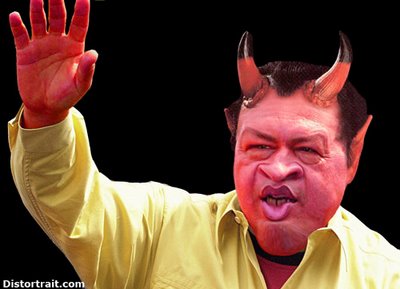 It shouldn't surprise. It raged throughout his tenure. It continues while he's ill. It vilifies progressive Bolivarianism. It wants neoliberal harshness replacing it.

It ignores responsible social reform. It's dismissive of Chavez's overwhelming popularity. He rescued Venezuela from its ugly past. Millions won't tolerate returning to what they deplore.

They "break up into pseudo-organizations and fade away." Their views don't reflect popular sentiment. They're targeting Chavez's health. They hope "to get him out of the political scene."

They're up to no good. They use private media and social networks. They "fabricate messages in tune with their economic and political interests."

Spain's media is "treacherous," she added. They distort Venezuelan reality. ABC is especially malevolent. It headlined Chavez is in an "induced coma."

He's on life support. He's dying. Cancer spread to his lower spine, bladder and other organs. With no corroborating evidence, it invented it. It maliciously turned truth on its head.

It's not alone. At issue is ousting Chavez. Media scoundrels, opposition politicians, and other right-wing ideologues try any way they can.

Washington supports them. With Chavez struggling to recover, they're taking full advantage.

On January 8, Granma International headlined "Intellectuals of the world in solidarity with Chavez," saying:

"THE Intellectuals and Artists in Defense of Humanity Network has joined peoples and individuals desiring the prompt and total recovery of Venezuelan President Hugo Chávez."

Thousands from over 90 countries gave "a fraternal embrace to the revolutionary people of Venezuela and expresses their most heartfelt solidarity, in the profound confidence that President Chávez will overcome all his difficulties."

Hermanos Saiz Association President Luis Morlote read the message. Cuban Union of Writers and Artists President Miguel Barnet said its purpose is to let Chavez know he's "not alone and to send him a breadth of optimism and energy from all the peoples of Latin America and the world."

"It also serves to refute the malign campaign unleashed by the extreme and recalcitrant right of Venezuela and many other countries in relation to Chavez's state of health and the future of Venezuela and Latin America."

Barnet called him "the author of a project for the renovation of our socialism."

"As president reelect, there is no interruption of performance of duties."

"The inauguration can be carried out at a later date before the Supreme Court."

She said Chavez's absence is neither "temporary" or "absolute." National Assembly legislators unanimously approved his travel to Havana for treatment.

"The circumstances in which we can talk of a temporary absence of the president have not taken place," she explained. It's for Chavez declare himself temporarily absent.

Morales distinguished between swearing-in and beginning a new term. It's a formality. It's not indispensable to holding an elected position.

Venezuelan "executive power (includes) the president, vice president(s), ministers and other organs, as well as administration officials," she said.

They'll "continue to carry out their functions under the principle of administrative continuity."

The Court ruled that Chavez was reelected. He didn't win for the first time. Magistrates reflected the will of the people. That's how democracy is supposed to work.

The ruling also protected Chavez's rights "as a human being," she added. It respects his struggle to regain health.

The full High Court decision can be read in English.

He requested an Organization of American States (OAS) opinion. It's a Washington-controlled front group. It's an instrument of regional imperial dominance. It has no legitimacy whatever.

He called on Vice President Nicolas Maduro "to assume the responsibility of office and govern." He'll decide later how to respond further.

He "remained on his sickbed in Cuba." Postponing an inauguration is "a first in Venezuelan history." It "laid bare the gravity of Chavez's condition after complications from a fourth cancer operation."

It said "opposition leaders are furious." They claim "Cuban-inspired manipulation of the constitution."

Chavez "has a cult-like appeal." He "pump(s) oil revenue into welfare projects." Opponents claim he "squandered" it on "misguided policies."

It's grown faster than public sector initiatives. Before 2008's financial crisis, bankers profited hugely. They said they were "having a party."

Venezuelans deplore social injustice. If asked, they'll contest for what's right. They're not about to sacrifice cherished benefits. They shame how political Washington treats Americans.

On January 9, The New York Times headlined "Chavez, or at Least His Sash Is Set for Venezuela Inauguration," saying:

Chavez dominated Venezuela for years, it said. His "health crisis and the decision to proceed on Thursday with a quasi-presidential inauguration that he is unable to attend are producing a stream of bizarre developments and national angst about who is in charge."

Symbolically they'll represent him in absentia. Everyone having sashes was asked to wear them. Doing so supports Chavismo. The Times mocks the idea.

"To no one's surprise," it added, "the Supreme Court, full of Chavez loyalists," postponed his inauguration. An unspecified later date will be named.

"(D)eepening uncertainty could go on for weeks of months." Chavez's condition remains a "stubborn mystery."

The usual sources were quoted. Instead of wishing him speedy recovery, vilifying Chavez is fair game.

On January 10, the Washington Post headlined "In Chavez's absence, US works to open communication with Venezuela," saying:

He's a "58-year-old leftist firebrand." He hasn't been "seen publicly in a month."

"Maduro is considered an ideologue close to Cuba's communist leadership." He's "in lock step with Chavez's longstanding policy of distancing Venezuela from" Washington.

Normalization isn't possible. Bush and Obama officials spurn him. Destabilization is prioritized. Chavez believes America wants him dead. He has just cause to say so.

Washington tried unsuccessfully for years to oust him. Dark forces never quit. They're hitting him hard while he's struggling to regain health.

"It is just going to take two to tango."

On January 8, the Chicago Tribune headlined "Venezuela after Chavez," saying:

Opposition leaders want "proof he's alive. Good luck getting answers out of the despots who run Venezuela - or Cuba."

The entire Tribune diatribe targeted Chavez mercilessly. Propaganda substituted for truth. He wants to be "president for life," he said. He may not outlive "the frail but lingering Castro."

Whoever governs Venezuela when he's gone "will preside over the mess" he made. He used the "national treasury like his personal ATM."

"He spent billions in oil (propping) up Cuba." He "stockpile(s) Russian arms. He "buys friends in North Korea, Iran and China."

"His revolution promised food, education and health care for the poor, but led to high unemployment, record inflation, and rampant crime."

It's hard imagining rubbish this bad gets published. Truth was turned on its head. Chavez transformed Venezuela responsibly.

Inflation fell dramatically. It dropped from 28.2% in 2010 to 18% now. It's still way too high. Responsible policies will drop it further.

Tribune editors made Venezuela sound like America. Doing it showed their true colors. They're scoundrels and duplicitous liars.

On January 8, it headlined "Reich: Castro Brothers Will Control Venezuela After Chavez."

Reich is an undicted war criminal. He was implicated in the Iran-Contra scandal. He was Reagan's Venezuelan ambassador. He was GW Bush's Assistant Secretary of State for Western Hemisphere affairs.

His deplorable record was so contentious, it took a recess appointment to install him. Doing so avoided congressional opposition.

He, Elliot Abrams, John Negoponte, Oliver North, and likeminded scoundrels were discredited for intervening lawlessly in Central America. They're assassins, not diplomats.

Reich is militantly anti-Chavez and Castro. He claims Fidel and Raul run Venezuela. They "make all important decisions."

They're "dismantl(ing) democratic institutions." They "beg(an) by targeting "the electoral process and the judiciary, then the freedom of the press."

Reich abhors truth. It's hard imagining anyone believes him. His record speaks for itself. He heads Otto Reich Associates. It does international consulting. He belongs in prison, not business.

It discussed his health, a possible successor, and whether Bolivarian "21st century socialism" can survive without him.

On January 6, the Journal updated a January 4 article headlined "Chavez's Appointed Heir Prepares for Battle." It stressed what it said earlier.

Maduro isn't up to the challenge. He's an unknown. He's regarded more for his loyalty than ideology or skills. His charisma doesn't match Chavez. His ability to enlist support will be tested.

Previous articles explained otherwise. He's very much up to the challenge. His credentials are impeccable. He's committed to Bolivarian progressiveness.

He's a former labor leader, legislator, National Assembly Speaker and Foreign Minister. He'll rise to the occasion if called on.

Signs point "to an imminent exit for the Venezuelan leader who controls a huge part of the world's oil."

Venezuela indeed is oil rich. The rest of IBD's diatribe was pure propaganda.

On January 9, Bloomberg headlined "Commandante Chavez Won't Give Up Power Before Ghost," saying:

Venezuela's Supreme Court reinterpreted constitutional law. It did so to justify postponing Chavez's inauguration. It'll have a harder time doing it if he dies.

"That doesn't preclude the possibility for constitutional hanky-panky, of course. The best insurance against that possibility is for Venezuela's neighbors….to insist the country abide by its constitution. Time is running out, Commandante!"

It ruled unanimously for postponement. Doing so "prompted angry (opposition claims) that the judiciary is controlled by politicians."

Opposition lawmaker Julio Borges said the decision isn't "of a strong government, but of a very weak (one) suffering an internal crisis."

Doing it substitutes for responsible journalism. Scoundrels are paid to lie. They abhor what reliable journalists do - their job.