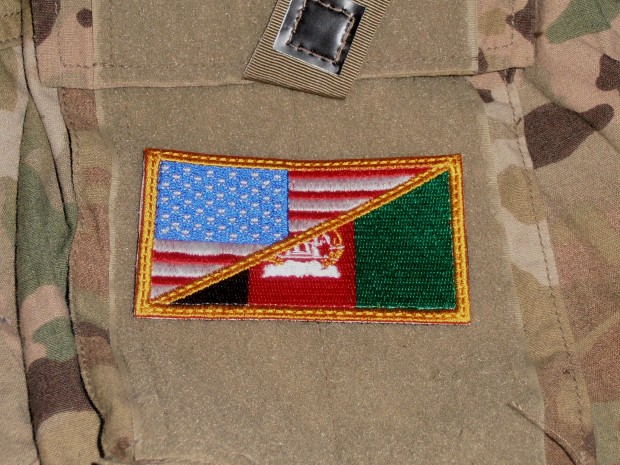 "Obama's determin(ed) to wind down a long, unpopular war."

Obama is "eager to turn a page after more than a decade of war."

"(B)eginning this spring American forces (will) play only a supporting role in Afghanistan."

Plans are "for a small troop presence in the country after the American mission formally ends there in 2014."

"(T)ransition is well underway," said Obama. Plans are for Afghan forces to replace Americans. By yearend 2014, they'll "have full responsibility for their security, and this war will come to a responsible end."

At the same time, US forces will "continue to fight alongside (Afghans) when necessary." Obama didn't say what troop strength will remain.

By spring 2013, "our troops will have a different mission - training, advising, assisting Afghan forces. It will be a historic moment and another step toward full Afghan sovereignty."

"Afghanistan (has) a long-term partner in the United States of America."

It's Washington's longest war. Iraq and Afghanistan are its most costly ones.

Iraq boils out of sight and mind. Afghanistan rages. Experts agree. The war was lost years ago. It continues. Why US officials don't explain.

"How many more men must die in support of a mission that is not succeeding," he asked? His report's opening comments said:

"Senior ranking U.S. military leaders have so distorted the truth when communicating with the US Congress and American people in regards to conditions on the ground in Afghanistan that the truth has become unrecognizable."

"This deception has damaged America's credibility among both our allies and enemies, severely limiting our ability to reach a political solution to the war in Afghanistan."

His classified report was more explicit.

"If the public had access to these classified reports," he explained, "they would see the dramatic gulf between what is often said in public by our senior leaders and what is actually true behind the scenes."

"It would be illegal for me to discuss, use, or cite classified material in an open venue, and thus I will not do so."

He traveled thousands of miles throughout the country. He spoke to US commanders, subordinates, and low-ranking soldiers. He talked at length with Afghan security officials, civilians and village elders.

What he learned bore no resemblance to rosy scenario official accounts. Insurgent forces control "virtually every piece of land beyond eyeshot of a US or International Security Assistance Force (ISAF) base."

Everywhere he visited, "the tactical situation was bad to abysmal."

Afghanistan's government can't "provide for the basic needs of the people." At times, local security forces collude with insurgents.

Davis hoped to learn something positive. He "witnessed the absence of success on virtually every level." One senior enlisted leader spoke for others. He hoped to get out alive in one piece.

Why war continues remains for Obama to explain. He dissembles instead.

Afghanistan is strategically important. It straddles the Middle East, South and Central Asia. It's in the heart of Eurasia.

China and Russia matter most. Allied they rival US superpower strength. Beijing is economically robust. Russia's nuclear capability and military pose the only threat to America's formidable might.

Russia is also resource rich. Its oil reserves are vast. Its natural gas supply is the world's largest. Expect neither country to roll over for Washington. They're a vital last line of defense.

In his book titled, "Freedom Next Time: Resisting the Empire," John Pilger addressed it, saying:

"Through all the humanitarian crises in living memory, no country has been abused and suffered more, and none has been helped less than Afghanistan."

Wherever US forces show up, mass killings, destruction and incalculable human misery follow. After over 11 years of war and occupation, Afghans perhaps suffer most of all.

Dozens of children die daily. Millions have little or no access to clean water. Life expectancy is one of the world's lowest. Infant mortality is one of the highest. So is pre-age five mortality. Electricity is scarce.

America and Afghanistan's puppet government don't help. Karzai is  a pathetic stooge. He's a caricature of a leader. He wasn't elected. He was installed. He's a former CIA asset/UNOCAL Oil consultant.

Afghanistan is the world's leading opium producer. During the 1990s, Taliban officials largely eradicated it. Washington reintroduced it.

They include large main operating bases to medium and smaller-sized ones. Covert ones supplement them. US Special Forces operate in over 120 countries. CIA elements are everywhere.

It's hugely destructive. Afghanistan's dystopian hell reflects it. Status of forces (SOFA) agreements establish a framework under which US forces operate abroad.

They provide an illusion of legitimacy. Nations are pressured and bullied to accept what harms their national interest.

In his book, "The Sorrows of Empire: Militarism, Secrecy, and the End of the Republic," Chalmers Johnson explained SOFAs as follows:

"America's foreign military enclaves, though structurally, legally, and conceptually different from colonies, are themselves something like microcolonies in that they are completely beyond the jurisdiction of the occupied nation."

"The US virtually always negotiates a 'status of forces agreement' (SOFA) with the ostensibly independent 'host' nation."

They're a modern day version of 19th century China's extraterritoriality agreements. They granted foreigners charged with crimes the right to be tried by his (or her) own government under his (or her) own national law.

SOFAs prevent local courts from exercising legal jurisdiction over American personnel. Murder and rape go unpunished unless US officials yield to local authorities. Offenders are usually whisked out of countries before they ask.

America's total number of SOFAs is unknown. Most are secret. Some are too embarrassing to reveal. America has hundreds of known, shared, and secret bases in over 150 countries.

Johnson said they "usurp, distort, or subvert whatever institutions of democratic (or other form of) government may exist with the host society."

Their presence is troubling. Locals lose control of their lives. They have no say. There's virtually no chance for redress. Permanent occupations harm most.

America built city-sized Iraq and Afghanistan super bases. They weren't established to be abandoned. Washington came to stay. Both countries are US occupied territory.

Perversion of Reality on Russia and Ukraine