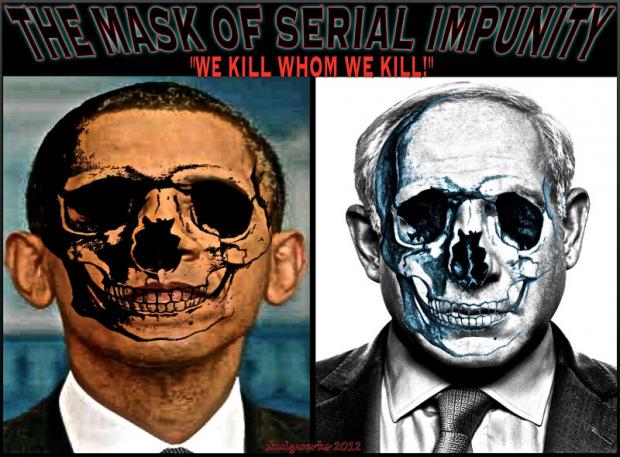 Netanyahu: The Face of Israeli Fascism

"What kind of India do they want," she asked? "A limbless, headless, soulless torso left bleeding under the butcher's clever with a flag driven deep into her mutilated heart?"

She compared Hindu right wing persecution of Muslims to Hitler's war on Jews. Occupied Palestinians are treated the same way.

Hitler terrorized Jews for a dozen years. Israel waged war on Palestinians for decades. It rages out-of-control. It shows no signs of ending.

During his first late 1990s prime ministerial term, Netanyahu was Israel's most polarizing leader. He exceeded the worst of his predecessors.

Right-wing extremists adore him. He's worse than ever now. Polls favor his January 22 reelection. Israelis will have themselves to blame. They're as out of touch as Americans. They accept what demands rejection.

Netanyahu wages war on democracy. He threatens his own people. He defies them. He gives chutzpah new meaning.

At issue is separating the West Bank from Jerusalem, Judaizing the entire city, surrounding Palestinian urban areas with encroaching Israeli settlements, and driving the last spike into the corpse of a two-state solution.

It's no longer possible with or without E1 development. Proceeding with it divides the West Bank into separate north/south areas. Doing so reflects Netanyahu's divide, conquer, steal, and ethnically cleanse strategy.

Palestinians acted in their own defense. They defied occupation harshness. They erected a Bab Al Shams village tent city. They did so on their own land.

Bab Al Shams means "Gateway to the Sun." It reflects Palestinian liberation. It's the gate to their return. Lebanese novelist Elias Khoury discussed it. He related Palestinian history symbolically through a love story.

Younis left his wife, Nahila. He joined Lebanese-based Palestinian resisters. She remained in Galilee. For years, he went back and forth secretly. Their children were born in Bab Al Sharms cave.

"We, the sons and daughters of Palestine from all throughout the land, announce the establishment of Bab Al Shams Village (Gate of the Sun)."

"We the people, without permits from the occupation, without permission from anyone, sit here today because this is our land and it is our right to inhabit it."

"A few months ago the Israeli government announced its intention to build about 4000 settlement housing units in the area Israel refers to as  E1."

"E1 block is an area of about 13 square km that falls on confiscated Palestinian land East of Jerusalem between Ma'ale Adumim settlement, which lies on occupied West Bank Palestinian land, and Jerusalem."

"We will not remain silent as settlement expansion and confiscation of our land continues. Therefore we hereby establish the village of Bab Al Shams to proclaim our faith in direct action and popular resistance."

"We declare that the village will stand steadfast until the owners of this land will get their right to build on their land."

Netanyahu ordered them out. He issued a lawless eviction notice. Forced expulsion followed.

He followed through, saying "the people and tents must be removed due to security considerations." He lied. He claimed the High Court injunction prohibits removing tents, not people.

Hundreds of security forces attacked Palestinians on their own land. They did so pre-dawn. Journalists and supporters were targeted.

"The people who need to leave are the settlers who have taken over the land, because the Palestinians have the right to stay on their own land."

They attacked and arrested peaceful Palestinians, supporters and journalists. Women, children, the elderly and infirm were dragged away violently.

Palestinian television aired what happened. Israeli forces disruptively tried to prevent it. They want Netanyahu-ordered violence out of sight and mind. Haaretz reported it.

One Palestinian spoke for others, saying:

"We tied our hands, chained ourselves with each other to prevent the soldiers from removing us. The Soldiers violently attacked us, beat us, and injured at least 10."

Haaretz said it "determined that the tents were put up on private Palestinian land." Netanyahu plans E1 development there.

"The eviction and the exercise of force is another indication that Israel is defying the international consensus on the need to vacate occupied Palestinian land."

One Palestinian spoke for others, saying "Our hope is to return to our land. For us, we are here because we want change. We did not forget our land and never gave it away."

Netanyahu represents the worst of rogue leadership. He defies rule of law principles and other democratic values. He's contemptuous of Palestinian rights. He threatens world peace.

Revenues spent are gone. "Can and should (Israel) bear the enormous defense budget, which has grown to unprecedented levels" under Netanyahu, he asked?

He's defiant. He won't touch defense spending. He claims it's "in light of the challenges facing Israel."

The Jewish state has no enemies whatever. Netanyahu invents them. He menaces the region. He endangers his own people. Megalomania and delusions of grandeur define him.

His mindset is messianic. He's a loose cannon. He's out-of-control. Hardliners around him share his vision. His Iranian obsession threatens Israel. His "bomb or be bombed" rhetoric reflects bluster. It demands condemnation and rejection.

Netayanhu rejected Olmert's accusation. He called him "irresponsible." He said he won't "divulge details of defense spending, but I can say that we developed capabilities in arenas both near and far, and that is an important investment."

Haaretz contributor Yoel Marcus calls it "One term too many." Netanyahu reflects a "storm….strong enough to paralyze our lives, close down roads," and threaten lives that deserve protection.

"Maybe all those who are still drunk with Netanyahu's glory will awaken before he brings disaster upon us all," he added. Odds favor the latter, not the former.