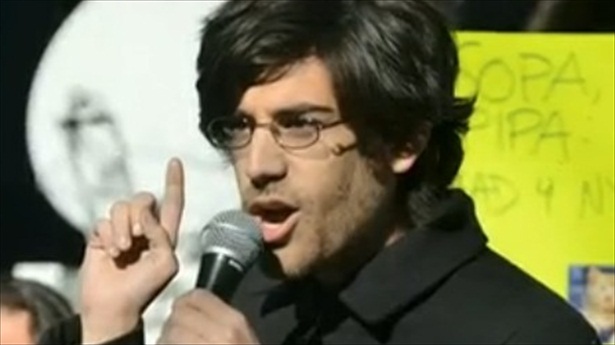 New York's medical examiner announced death by "hang(ing) himself in his Brooklyn apartment."

Lingering suspicions remain. Why would someone with so much to give end it all this way? He was one of the Internet generation's best and brightest.

He advocated online freedom. Selflessly he sought a better open world. Information should be freely available, he believed. A legion of followers supported him globally.

Alive he symbolized a vital struggle to pursue. Death may elevate him to martyr status but removes a key figure important to keep alive.

The New York Times headlined "Internet Activist, a Creator of RSS, Is Dead at 26, Apparently a Suicide."

He was an Internet folk hero. He supported online freedom and copyright reform. He advocated free and open web files. He championed a vital cause. He worked tirelessly for what's right.

Internet Archive founder Brewster Kahle called him "steadfast in his dedication to building a better and open world. He is among the best spirits of the Internet generation."

Who'll replace him now that he's gone? He called locking up the public domain sinful. He selflessly strove to prevent it.

In July 2011, he was arrested. At the time, he was downloading old scholarly articles. He was charged with violating federal hacking laws. MIT gave him a guest account to do it.

He developed RSS and co-founded Reddit. It's a social news site.

He was found dead weeks before he was scheduled to stand trial. He was targeted for doing the right thing. He didn't steal or profit. He shared. His activism was more than words.

On January 12, it headlined "Farewell to Aaron Swartz, an extraordinary hacker and activist." It called him "a close friend and collaborator." Tragedy ended his life.

"Aaron's death is not simply a personal tragedy. It is the product of a criminal justice system rife with intimidation and prosecutorial overreach. Decisions made by officials in the Massachusetts US Attorney's office and at MIT contributed to his death."

Swartz did as much or more than anyone to make the Internet a thriving open knowledge ecosystem. He strove to keep it that way. He challenged repressive Internet laws.

He founded Demand Progress. It "works to win progressive policy changes for ordinary people through organizing and grassroots lobbying," he said.

It prioritizes "civil liberties, civil rights, and government reform." It ran online campaigns for justice. It advocated in the public interest. It challenged policies harming it.

He mobilized over a million online activists. His other projects included RSS specification, web.py, tor2web, the Open Library, and the Chrome port of HTTPS Everywhere.

He launched Creative Commons. He co-founded Reddit. He and others made it successful. His Raw Thought blog discussed "politics and parody." He had much to say worth hearing.

In 2011, he used the MIT campus network. He downloaded millions of journal articles. He used the JSTOR database. Authorities claimed he changed his laptop's IP and Mac addresses. They said he did it to circumvent JSTOR/MIT blocks.

He was charged with "unauthorized (computer) access" under the Computer and Abuse Act. He did the equivalent of checking out too many library books at the same time.

They usurped diktat power. They spurn rule of law principles and other democratic values. They enforce police state authority. They prioritize what no civil society should tolerate.

They claimed Aaron intended to distribute material on peer-to-peer networks. He never did. It hardly mattered. Documents he secured were returned. No harm. No foul. Federal authorities charged him anyway.

In July 2011, a Massachusetts grand jury indicted him. He was arraigned in Boston US District Court. He pled not guilty to all charges. He was freed on a $100,000 unsecured bond.

If convicted, he faced up to 35 years imprisonment and a $1 million dollar fine. He wanted scientific/scholarly articles liberated. They belong in the public domain. He wanted everyone given access. It's their right, he believed.

He wanted a single giant dataset established. He did it before. He wasn't charged. Why now?

"While his methods were provocative," said EFF, his goal was "freeing the publicly-funded scientific literature from a publishing system that makes it inaccessible to most of those who paid for it."

EFF calls it a cause everyone should support. Aaron was politically active. He fought for what's right. Followers supported him globally.

In the "physical world," at worst he'd have faced minor charges, said EFF. They're "akin to trespassing as part of political protests."

"Aaron, we will sorely miss your friendship, and your help in building a better world." Many others feel the same way.

Did Aaron take his own life or was he killed? Moti Nissani is Wayne State University Department of Biology Professor Emeritus. "Who Killed Aaron Swartz," he asked?

He quoted Bob Marley saying: "How long shall they kill our prophets while we stand aside and look?" He listed reasons why Obama administration scoundrels wanted him dead.

His death "was preceded by a vicious, totally unjustified, campaign of surveillance, harassment, vilification, and intimidation."

US authorities "had excellent reasons to kill" Aaron. He was legendary in his own right like John Lennon, MLK, Malcolm X and others. He threatened status quo dominance. He denounced Obama's kill list and anti-Iranian cyber attacks.

Despite extreme pressure, he pressed on. He defied prosecutorial authority. In October 2009, he posted his FBI file online. Doing do "probably signed his own lynch warrant," said Nissani.

Two days before his death, JSTOR, his alleged victim, declined to press charges. It went further. It "announced that the archives of more than 1,200 of its journals would be available to the public free."

Aaron had just cause to celebrate. "Are we to believe" he hanged himself instead?

Government officials and corporate bosses "had plenty of reasons" to want him dead. He challenged their totalitarian agenda. "He was creative, idealistic and unbendable."

"He was young and admired by many." Did "invisible government" elements kill him?

"They did so either indirectly through constant harassment….or, most likely, directly by hanging him and" blaming him for their crime.

"All this raises a dilemma for those of us possessing both conscience and a functioning brain." How much longer will we stand by and do nothing?

How long will we tolerate what demands condemnation? When will we defend our own interests?

Freedom is too precious to lose. Preserving it depends on us. No one will do it for us. It's not possible any other way. It never was. It never will be.

His own words say it best.

"Information is power," he said. "But like all power, there are those who want to keep it for themselves."

"The world's entire scientific and cultural heritage, published over centuries in books and journals, is increasingly being digitized and locked up by a handful of private corporations."

"Want to read the papers featuring the most famous results of the sciences? You'll need to send enormous amounts to publishers like Reed Elsevier."

"There are those struggling to change this. The Open Access Movement has fought valiantly to ensure that scientists do not sign their copyrights away but instead ensure their work is published on the Internet, under terms that allow anyone to access it."

"But even under the best scenarios, their work will only apply to things published in the future. Everything up until now will have been lost."

"That is too high a price to pay. Forcing academics to pay money to read the work of their colleagues? Scanning entire libraries but only allowing the folks at Google to read them?"

"Providing scientific articles to those at elite universities in the First World, but not to children in the Global South? It's outrageous and unacceptable."

" 'I agree,' many say, but what can we do?' The companies hold the copyrights. They make enormous amounts of money by charging for access, and it's perfectly legal - there's nothing we can do to stop them. But there is something we can, something that's already being done: we can fight back."

"Those with access to these resources - students, librarians, scientists - you have been given a privilege. You get to feed at this banquet of knowledge while the rest of the world is locked out."

"But you need not - indeed, morally, you cannot - keep this privilege for yourselves. You have a duty to share it with the world. And you have: trading passwords with colleagues, filling download requests for friends."

"Meanwhile, those who have been locked out are not standing idly by. You have been sneaking through holes and climbing over fences, liberating the information locked up by the publishers and sharing them with your friends."

"But all of this action goes on in the dark, hidden underground. It's called stealing or piracy, as if sharing a wealth of knowledge were the moral equivalent of plundering a ship and murdering its crew. But sharing isn't immoral - it's a moral imperative. Only those blinded by greed would refuse to let a friend make a copy."

"Large corporations, of course, are blinded by greed. The laws under which they operate require it - their shareholders would revolt at anything less. And the politicians they have bought off back them, passing laws giving them the exclusive power to decide who can make copies."

"There is no justice in following unjust laws. It's time to come into the light and, in the grand tradition of civil disobedience, declare our opposition to this private theft of public culture."

"We need to take information, wherever it is stored, make our copies and share them with the world. We need to take stuff that's out of copyright and add it to the archive."

"We need to buy secret databases and put them on the Web. We need to download scientific journals and upload them to file sharing networks. We need to fight for Guerrilla Open Access."

"With enough of us, around the world, we'll not just send a strong message opposing the privatization of knowledge - we'll make it a thing of the past. Will you join us?"


Information" href="http://jonathanturley.org/2013/01/14/aaron-swartz-and-the-obama-administrations-war-on-public-access-to-information/">Aaron Swartz And The Obama Administration’s War On Public Access To Informationhttp://arstechnica.com/tech-policy/2013/01/family-blames-us-attorneys-for-death-of-aaron-swartz/