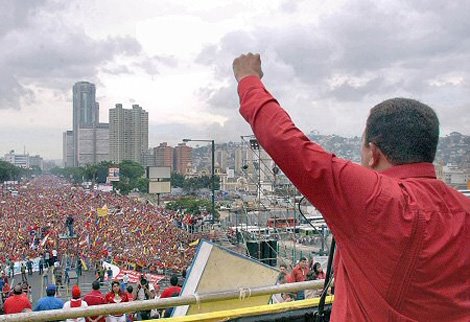 On January 14, The Havana Times headlined "Chavez Is Improving," saying:

"Despite his poor health after complex surgery this past December 11, his overall clinical evolution has been favorable over the last several days."

"The president continues to strictly comply with his medical treatment. The respiratory infection is controlled, although the commander-president still requires specific measures for addressing his insufficient breathing."

"The president is aware and in contact with his family, his political team and with the attending team of physicians in order to keep abreast of relevant information."

"On the eve of the celebration of the "Divina Pastora" procession, the Bolivarian Government of Venezuela invites Venezuelan families to join in prayer to the patron saint of Barquisimeto to fill our country with peace and happiness."

"The head of state continues to respond well to the treatment and his recovery is advancing every day, said Adan."

"We are sure that with the support of God, science and our people, the president will come out on top in this new battle."

"The reports circulating on social networks and other media that the president is in a coma and the family is discussing the supposed disconnection of life-support equipment are totally false."

Chavez's health provided another reason. It's unclear if either leader saw him. He's very much on their minds.

GPP is a broad front. It was created in 2011. It's an alliance of popular organizations and political parties. They advance social justice. They support Chavez and Bolivarianism.

On January 10, they rallied throughout Venezuela supportively. Tens of thousands joined them. So did representatives from 27 regional countries. They reacted against right-wing opposition.

It ruled unanimously for postponement. A later date will be scheduled. High Court magistrates will administer swearing-in when it's held.

"This issue has now been resolved by the three powers of the Venezuelan state (executive, legislative and judicial).

"They have chosen a way that gives time for the situation (with regard to Chavez's health) to become clear."

It "allows a waiting period for the president elect to return and be sworn-in."

Opposition elements have other ideas. They called for a January 23 "massive demonstration of force."

They urged supporters to join "this civic, peaceful and democratic struggle, principally inside our country, as well as bringing the denouncement of the violation of our constitution and its democratic principles to the international community.

Chavez has overwhelming popular support. It comes out often supportively. It's there when needed. Public sentiment won't be denied.

Washington and opposition Roundtable of Democratic Unity (MUD) leaders want Venezuela returned to its ugly past. So do media scoundrels.

Chavez's health is exploited. Bolivarianism is challenged. Constitutional law is twisted. Venezuelan print and broadcast media are predominantly private. They're some of the worst anywhere.

Corporate television is especially hostile. It has a 95% market reach. Anti-Chavez programming is featured. Dark forces are defiant and undeterred. They take advantage of Venezuela's Social Responsibility Law.

It expanded on Venezuela's 2004 Law of Social Responsibility for Radio and Television (LSR).

"If two or more persons in any State or Territory conspire to overthrow, put down, or to destroy by force the (elected) Government of the United States, or to levy war against them, or to oppose by force the authority thereof, or by force to seize, take, or possess any property of the United States contrary to the authority thereof, they shall each be fined under this title or imprisoned not more than 20 years, or both."

"Treason against the United States, shall consist only in levying War against them, or in adhering to their enemies, giving them Aid and Comfort."

Venezuela's dominant media exceed the worst of America's. They take full advantage of Venezuelan law. They come close to inciting insurrection or rebellion.

They compromise national security. They get away with what's impossible in America. They'd face sedition charges or worse if tried.

Globovision is one of the worst. It's a repeat offender. It's been fined but not suspended. In America and most other societies, it would be shut down or worse.

It's hostile and manipulative. It's unabashedly right-wing. It's a platform for subversion. It spurns journalistic standards. It participated in the aborted April 2002 coup.

It's not alone. Other dominant broadcasters do their share. So do privately owned print media. They make America's almost look respectable. Venezuela's government tolerates them. It elevates freedom to a higher level.

It states "television and radio media cannot transmit elements that seek to create agitation among the population, alter the public order, attack the stability of the democratic system and the legitimate authorities, or seek to generate hate or intolerance for religious or political reasons."

Globovision's programming bent the rules. It falsely accused Venezuela's government of violating constitutional law. Conatel ordered it to cease and desist. Fines and/or sanctions may follow.

Globovision is a repeat offender. It's a hostile force. It mocks legitimate media. It's an embarrassment to free expression. It gets away with what most free societies won't tolerate.

MUD leaders are no better. They called Venezuela's High Court ruling "prefabricated" and "a huge lie." Opposition spokesperson Vestalia Sampedro said "The decision allows our country to be governed by people who have not been elected."

MUD presidential candidate Henrique Capriles said the ruling "doesn't clear up the uncertainty. This is a government full of liars."

"Venezuela's Supreme Court has decided to resolve this problem for the government. (It) respond(ed) to the interests of a political party."

It remains to be seen what he and likeminded hardliners have in mind ahead. Washington provides generous support.

US officials targeted Chavez for years. They want him ousted or dead. They want subservient puppet leadership replacing him.

El Universal is a prominent opposition broadsheet. It called the Court decision "the worst crisis in the history of the republic."

Venezuela is a hornet's nest of virulent right-wing opposition elements. The power of popular sentiment stands resolutely against them.

They've prevailed for 14 years. They've been counted out before.  Like the mythical Lazarus, they're resolute in better than ever form.

They've got help. MercoPress said "Presidents, Foreign ministers and representatives from 22 Latin American and Caribbean countries stamped their signatures to a (Caracas) declaration stating their commitment in support of Venezuela and its institutions in the international stage."

They're collaborating in "international spaces." They're challenging efforts to capitalize on Chavez's health. They oppose "pretext(s) to attack the democratic institutions of Venezuela."

They're firm against efforts "to destabilize and promote interventionism in affairs on which the Venezuelan people (have) clearly expressed (themselves)."

"Lest there be no mistake from the enemies of democracy, the constitution, peace and development in Venezuela."

"In our America and with the peoples of the world, we will remain in solidarity with Venezuela and her democratic decision."