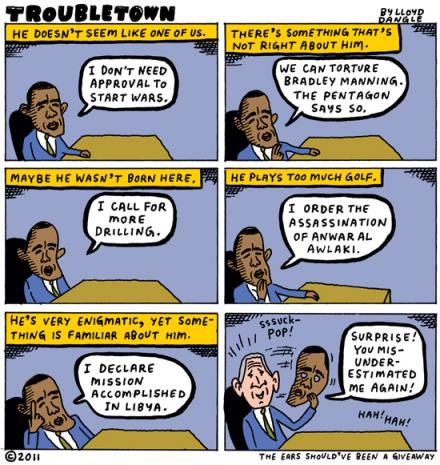 Throughout his tenure, Obama's done what supporters thought impossible. He's governed to the right of George Bush.

He mocks rule of law principles and other democratic values. He prioritizes wars on humanity. He's waging multiple direct and proxy ones. War on terror subterfuge disguises them.

He plans more. He's sending US special forces to 35 African countries. They already infest most others. CIA elements operate everywhere. They come to destabilize and disrupt, not help.

He challenges Russia's military strength. He targets China's growing economic might. At the same time, he's in bed with rogue Israeli governance. He supports some of the most ruthless corrupt tyrants.

He's economically and socially destructive at home. He spurns popular interests. He looted the nation's wealth. He wrecked the economy. He consigned growing millions to impoverishment without jobs.

He institutionalized tyranny. He targets dissenters. Challenging political corruption, corporate crooks, or abuse of power lawlessness endangers anyone who tries.

He's a con man. After all the harm he caused, half the country still supports him. He gets away with murder and much more.

Most people haven't a clue. They're out of touch. They don't understand what harms them. They ignore their own welfare.

Some perhaps don't care. Others are dismissive. They know more about bread and circuses than vital major issues to address.

Obama takes full advantage. He governs lawlessly. He's in bed with corrupted monied interests. They own him.

He plans throwing most Americans under the bus. It's his scheme to give them more. America is more hypocrisy than democracy.

Obama is money power's point man. He takes orders and salutes. He prioritizes destroying America's social contract. Domestic budget cuts will be made on the backs of ordinary people.

On January 14, he did what he does best. He lied. He's a serial liar. He's a moral coward. In the White House East Room, he held his final first term press conference. Duplicity substituted for truth.

"They (Republicans) will not collect a ransom in exchange for not crashing the American economy," he said.

"The financial well-being of the American people is not leverage to be used. The full faith and credit of the United States of America is not a bargaining chip."

Remember years earlier. He stressed "shared sacrifice." Left unexplained then and now is who shares and who sacrifices.

Duopoly power runs America. Global monied interests own it. Not a dime's worth of difference separates Democrats from Republicans. On issues mattering most, they're in lockstep.

Ordinary Americans have been targeted for decades. Since the mid-1970s, average inflation adjusted incomes for most people fell.

People struggle to get by. Growing millions are impoverished. Real unemployment is 23%. It nearly matches Great Depression levels. Hunger and homelessness are major problems. Force-fed austerity is planned when stimulus is vitally needed.

His message was "confrontational." He drew "battle lines." They've "hardened ahead of the next budget fight." The Journal warned about hitting America's "borrowing limit."

The nation's debt ceiling is more illusion than fact. It's practically automatically raised when reached or shortly after.

Neither party wants voters blaming them for crashing the economy. Reality takes precedence over bluster, scoring political points, and one-upsmanship.

"He won't negotiate with Republicans," he claims. Spending cuts and higher taxes go together like ham and eggs.

He larded the yearend agreement with tens of billions of dollars in corporate benefits. He's got lots more in mind. He's doing it on the backs of ordinary people.

"Once upon a time," said Journal editors, "the Democratic political strategy was 'tax, spend and elect.' And then tax some more. Republicans" better get the message "or they'll end up having to raise taxes again."

A second editorial headlined "They Have Suspicions," saying:

"Obama demonizes anyone who disagrees with him."

If "fiscal negotiations are going nowhere, perhaps it's because the president simply won't make an honest argument."

If Journal editors won't tell readers about bipartisan complicity to destroy America's social contact, perhaps it's because they don't want them to know.

Nor does Bloomberg. It headlined "Congress Can Resolve the Debt-Limit Crisis. Really," saying:

The "absurd has become sadly commonplace in Washington." Obama "compar(es) Congress to a bunch of deadbeat diners who refuse to pay their bill."

At the same time, he "was careful to say this was a crisis Congress would have to solve."

The criminal class in Washington is bipartisan. It's longstanding. It's worse now than ever. Media scoundrels substitute bluster for plain truth.

Obama, complicit Republicans, and most Democrats operate the same way. Demagoguery substitutes for telling it like it is. Both parties are two sides of the same coin.

Neither one explains. Media scoundrels duck and cover. Grand bargain betrayal was planned long ago. Political theater conceals its harshness.

At issue isn't deficit cutting. It's destroying America's social contract. It prioritizes what bankers, other corporate favorites, and super-rich elites want most.

Obama's their point man. He's got four more years to finish what his first term began. Worse than ever times loom. They've been happening gradually for decades.

They're planned incrementally. It's like boiling a frog. Eliminating America's social contract is on the menu. It'll be dinner when served.

America already isn't fit to live in. Imagine how much worse ahead is planned.