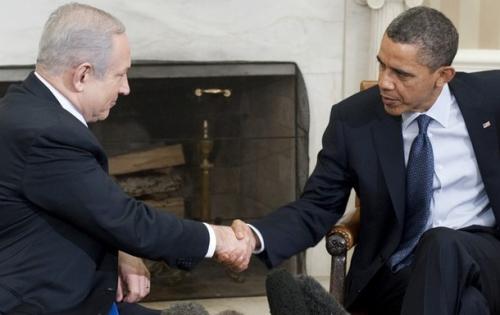 They've gone at each other before. Neither one likes the other.

A previous article said Netanyahu repeatedly puts both feet in his mouth and risks swallowing them.

He's arrogant, abrasive, offensive, duplicitous, thuggish, and dangerous. He's an embarrassment to legitimate governance. It's hard imagining why Israelis put up with him.

"(W)e need a prime minister," he said," who will not be subject to political pressures when deciding on such issues as an attack on Iran or a peace agreement."

"The State of Israel is at a critical point in time of great challenges both foreign and domestic. Minority groups are controlling the state and the majority is not being heard."

He called it "orchestrated and purposely timed hysteria that puts the country into a state of anxiety, artificial or not."

He can't be trusted. Others in Israel feel the same way.

He's obsessed about a nonexistent Iranian existential threat. He's willing to embroil the entire region in conflict challenging it. He'd risk destroying Israel if he tried.

He's gone out of his way to alienate support from Washington. No wonder Obama deplores having to deal with him. As long as he remains prime minister, relations with America won't be easy.

He believes what he wants matters most. He's done his best to destroy what remains of America's special relationship with Israel.

It's a marriage of convenience. Each side serves its own interests. Netanyahu doesn't make it easy. He's his own worst enemy. He wants a firm commitment and timeline on Iran.

He won't take no for an answer. He's overbearing, demanding and offensive. He alienates those around him.

Haaretz said Goldberg is close to Obama administration officials. He's a conduit. He delivers messages to Netanyahu and other Israeli officials. Often it's on Palestinian and Iranian issues.

Goldberg "described the White House's lack of trust in and frustration with Netanyahu."

When Obama learned about his E1 Ma'aleh Adumim development plan, he "didn't even bother getting angry."

"He told several people that this sort of behavior on Netanyahu's part is what he has come to expect, and he suggested that he has become inured to what he sees as self-defeating policies of his Israeli counterpart."

After UN Member States upgraded Palestine from observer to non-member UN status, Netanyahu responded harshly. Obama said privately that "Israel does not know what its own best interests are."

He believes that "if Israel, a small state in an inhospitable region, becomes more of a pariah - one that alienates even the affections of the US, its last steadfast friend - it won't survive."

"Iran poses a short-term threat to Israel's survival. Israel's own behavior poses a long-term one."

Netanyahu is "a political coward, an essentially unchallenged leader who nevertheless is unwilling to lead or spend political capital to advance the cause of compromise."

Obama expresses no optimism about restarting peace process talks. It was stillborn from inception.

Frustration with Netanyahu changes nothing, said Goldberg. Billions of dollars in annual military and other aid will continue.

Washington remains Israel's paymaster/partner. No other relationship caused so much regional grief and turmoil. Expect much more ahead.

He's unfit to serve. He's a world class thug. He belongs in prison, not government. He tolerates no opposition.

Close associates say he'll "continue to stand firm on Israel's national interests and will not make any compromises that will harm the security of Israeli citizens."

"He will not agree to a return to the 1967 borders and will make certain that Jerusalem remains united."

"Anyone who hadn't woken up yet, got up this morning to a very sharp and clear statement by the president of the United States, who has said some serious things about Israel's prime minister," she said.

"One can like or not like the president of the United States, but we're talking about Israel's greatest friend and Israel's security, so these remarks should wake up every Israeli."

"It saddens me that we've reached this situation, but they're laying the truth out for us."

"If there isn't a dramatic change and people sitting on the fence don't go out and vote, Israel will keep heading into isolation that will lead to violence."

Her own watch revealed disturbing policies she endorsed. As foreign minister, she matched Netanyahu's extremism.

Livni doesn't give an inch on what Palestinians most want.

"Israel (is) the state of the Jewish people," she stressed. She feels the same way now.

She talks peace but deplores it. She headed earlier negotiations and spurned it. She's for unchallenged Israeli regional dominance.

Israeli elections are scheduled a day after Obama is inaugurated. Netanyahu planned them that way. He could have served until fall this year.

He preferred an earlier mandate. His "goal was transparent." He wants to prevent Obama's Middle East agenda from clashing with his own.

Doing so might give Israeli voters pause. They might prefer anyone but him. In 1992, it happened. Yitzhak Shamir clashed with Bush I. Yitzhak Rabin defeated him.

Netanyahu wants four more years before he starts. "Anyone who hoped Obama would break his silence and reveal his views to the Israeli public has thus far been disappointed," said Haaretz.

It reflects views at odds with "Netanyahu's campaign advertisements." They "depict (him) as a statesman welcome overseas, and especially in Washington."

Israelis have cause to reflect. Do Netanyahu and hard-right coalition partners deserve another four years? Will "confrontation with Obama and the rest of the world" follow?

Israeli elections are days away. Do voters have enough time to reconsider their option? Are they wise enough to shift course?

Recent history suggests otherwise. Netanyahu can rest easy. Barring the unexpected, he looks certain to remain prime minister. Israelis will have themselves to blame.

There's "a lack of rapport between these two men," he said. "They don't like each other very much. Plus, there are serious differences between our interests and Israel's."

Netanyahu stresses "agenda-setting." It's "personal" with him. He thinks pressuring Obama works.

Netanyahu expects little from them. Privately he calls them hypocritical and naive. Opponents aren't tolerated. His agenda comes first.

They'll be built on stolen Palestinian land. Over a third are inside the Green Line. Settler rights come first.

Palestinians act in their own defense. They defy occupation harshness. They erected a Bab Al Shams ("Gateway to the Sun") village tent city. They did so on their own land. They have deeds to prove it.

Israeli forces attacked them. They forcibly removed them. Doing so violated a High Court temporary injunction. It prohibited evacuation.

Resisters were beaten. Injuries were reported. Ambulances were blocked from helping them. Arrests were made. Journalists were targeted.

She said they acted to create a public disturbance. "This wasn't happenstance or some tourist venture," he added.

"Foreign elements" were involved, she claimed. They're "trying to take advantage of international sensitivity regarding the site." They're trying "to do public damage to Israel."

Netanyahu and likeminded hardliners do more on their own than anyone can do it for them.

On January 15, "dozens of (Palestinians, supporters, and journalists) arrived and tried to enter the site, despite a sign declaring it a closed military zone," said Ofek.

Palestinians petitioned Israel's High Court for redress. It's their land. It belongs only to them. They're entitled to be there. Israel has no right to evict them.

Building on private Palestinian land is lawless. Settlements infest the West Bank and East Jerusalem on it.

Palestinians asked High Court judges to rule in their favor. They haven't yet done so.

Dov Kenin is a Jewish/Arab Hadash Party MK. It's unique in Israel.

Kenin calls Netanyahu's government "dangerous." He's committed to do whatever it takes to replace it. He and other Hadash members support "individual freedom."

"Socialism (is) more democratic than any of the other alternatives," he believes.

In the 1980s, Hadash supported "two states for two peoples." He believes it's still possible. He's out of touch with reality. One state for all its people is the only viable option.

"A peace agreement is only possible if it is fair to both peoples," he stresses.

"Our enemy is on the right, Netanyahu," he stresses. "We are a peace movement that opposes devastating wars as they erupt."

He holds Netanyahu responsible for violence on his watch. He deplores having him around in charge for another four years.

He believes a "Jewish/Arab partnership" is Israel's best choice. Hadash will have little say post-elections.

Polls suggest it will win four of 120 Knesset seats. Expect the worst of hardline rule stay empowered. Israelis will have themselves to blame.