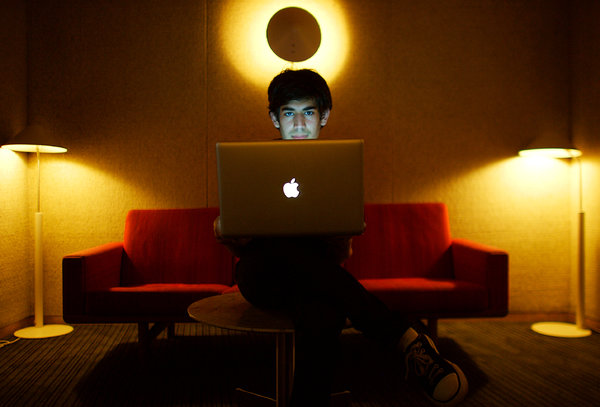 Advocates of online openness and freedom lost a committed champion. The Economist said to call him "gifted would be to miss the point. As far as the internet was concerned, he was the gift."

An official family statement called him "(o)ur beloved brother, son, friend, and partner….We are in shock, and have not yet come terms with his passing."

His "insatiable curiosity, creativity, and brilliance; his reflexive empathy and capacity for selfless, boundless love; his refusal to accept injustice as inevitable - these gifts made the world, and our lives, far brighter."

"Aaron's commitment to social justice was profound, and defined his life. He was instrumental to the defeat of an Internet censorship bill; he fought for a more democratic, open, and accountable political system; and he helped to create, build, and preserve a dizzying range of scholarly projects that extended the scope and accessibility of human knowledge."

"He used his prodigious skills as a programmer and technologist not to enrich himself but to make the Internet and the world a fairer, better place."

"His deeply humane writing touched minds and hearts across generations and continents. He earned the friendship of thousands and the respect and support of millions more."

"Aaron's death is not simply a personal tragedy. It is the product of a criminal justice system rife with intimidation and prosecutorial overreach."

"Decisions made by officials in the Massachusetts US Attorney's office and at MIT contributed to his death. The US Attorney's office pursued an exceptionally harsh array of charges, carrying potentially over 30 years in prison, to punish an alleged crime that had no victims."

"Meanwhile, unlike JSTOR, MIT refused to stand up for Aaron and its own community's most cherished principles."

"Today, we grieve for the extraordinary and irreplaceable man that we have lost."

Lawrence Lessig is an academic, political activist, online freedom proponent, former University of Chicago/Harvard Law School Professor, and current Professor of Law at Stanford. He founded the school's Center for Internet and Society.

He knew Aaron as a friend and lawyer. On January 13, he headlined "Prosecutor as Bully," saying:

Whatever Aaron did wasn't for personal gain. He did what he thought right. JSTOR understood. "They declined to pursue their own action against Aaron."

They asked prosecutors to drop charges. "MIT, to its great shame, was not as clear."

Prosecutors took full advantage. They got the excuse they wanted to target Aaron. They wrongfully criminalized him.

"From the beginning, the government worked as hard as it could to characterize what Aaron did in the most extreme and absurd way."

It suggested he downloaded academic and scholarly articles for profit.

"But anyone who says that there is money to be made in a stash of ACADEMIC ARTICLES is either an idiot or a liar. It was clear what this was not, yet our government continued to push as if it had caught the 9/11 terrorists red-handed."

"Aaron had literally done nothing in his life 'to make money.' " Whatever he earned wasn't by intent.

"(W)e live in a world where the architects of the financial crisis, (notorious despots, and other scoundrels) regularly dine at the White House."

"(W)hy (was) Aaron labeled a 'felon?' " Prosecutors bled him dry. "(W)e need to get beyond the 'I'm right so I'm right to nuke you' ethics that dominates our time."

"That begins with one word: shame. One word, and endless tears."

A previous article questioned the official suicide story. It quoted Aaron extensively in his own words. It asked if he sounded like someone planning suicide.

He advocated online openness and freedom. He called information "power." He wanted it in the public domain. He wanted everyone able to share it freely and openly. Failure is "too high a price to pay," he said.

It's "outrageous and unacceptable," he added. Possessors of information are obligated to share it. They're morally bound not to "keep this privilege for (them)selves."

"(S)haring isn't immoral - it's a moral imperative. Only those blinded by greed would refuse to let a friend make a copy."

"Large corporations….are blinded by greed." Politicians are "bought off to back them." Legislation follows. It's immoral and unjust.

"There is no justice in following unjust laws. It's time to come into the light and, in the grand tradition of civil disobedience, declare our opposition to this private theft of public culture."

Aaron advocated open access. He wanted information everyone has the right to know made public. Download them from scientific journals, he urged. Upload them to file sharing networks.

Make privatization of knowledge a thing of the past. He asked everyone to join him in a struggle for what's right. He did it because it matters.

He paid with his life. New York's medical examiner allegedly conducted an autopsy. He pronounced death by "hang(ing) himself in his Brooklyn apartment."

A previous article said lingering suspicions remain. Why would someone with so much to give end it all this way? Why would he throw it away?

Why was no private autopsy and forensic examination done? Why aren't questions raised about a potential coverup? Why isn't independently determined full disclosure demanded?

Did Aaron take his own life or was he murdered? America has a dark history of eliminating noted figures it wants silenced.

Aaron perhaps is the latest. His death raises obvious suspicions. He appears a victim of capitalist greed. His open access advocacy had to be silenced. What better way than by making murder look like suicide.

Was he drugged and then hanged? Was eliminating him planned long ago? Was it done to avoid protracted headline-making trial proceedings?

Many of Aaron's global followers would have reported them daily. Doing so would have revealed prosecutorial injustice. Dark forces perhaps decided not to risk it.

Prosecutors hounded him. His attorney, Elliot Peters, accused them of doing it to gain publicity. They cooked up alleged computer crimes against him.

They crossed ethical and moral lines, said Lessig. They did what they did because they can. They made him a martyr in the process. He's internationally recognized for fighting for what's right.

Internet freedom is at stake. In 2008, candidate Obama promised to "(s)upport the principle of network neutrality to preserve the benefits of open competition on the Internet."

He and likeminded Washington extremists support an alphabet soup of federal and international freedom-destroying measures.

Secrecy and misbranding conceal their harshness. Activists know what's going on and say so. At issue is unchallenged global corporate empowerment regulation free.

Internet freedom, popular rights, and national sovereignty are too important to lose. They're on the chopping block for elimination.

Profits alone matter. Compromising civil liberties is a small price to pay. So are public knowledge, privacy, and other fundamental rights free societies should champion. Democratic values are too important to lose.

Obama has other ideas in mind. Aaron and likeminded open access advocates challenged him. Doing so targeted him for elimination. Others are likewise threatened.

Doing the right thing is dangerous. Everyone involved is closely monitored. FBI, CIA and other national security files are maintained.

Lawless warrantless surveillance watches like Big Brother. Phones are tapped. Emails and other private communications are monitored, collected and stored. Stealth videos at times are used. There's no place to hide.

Doing the right thing is hazardous. America's unfit to live in. For many, it's dangerous. Other Western societies operate the same way. The best, brightest and most dedicated are targeted.

Some are marked for elimination. Odds suggest Aaron was one. A fitting epitaph should read killed by capitalist greed.

He's gone but by no means forgotten. Others continue his struggle for open access justice. Doing so is the only chance to have it. The alternative is too intolerable to accept.

"Pursuant to FRCP 48(a), the United States Attorney for the District of Massachusetts, Carmen M. Ortiz, hereby dismisses the case presently pending against Defendant Aaron Swartz."

"In support of this dismissal, the government states that Mr. Swartz died on January 11, 2013."

Omitted was full disclosure about how and most important why. Aaron was no ordinary Internet freedom advocate. His prominence made him a marked man. It cost him his life.

A statement followed. It called the Justice Department's prosecution "a grotesque miscarriage of justice" and "a distorted and perverse shadow of the justice that Aaron died fighting for."

"We call for this tragedy to be a basis for a renewed and unwavering commitment to a free and unfettered Internet, spared from censorship with equality of access and franchise for all," it added.

Aaron grew up in suburban Chicago. On January 11, he died in his Brooklyn apartment. He was 26 years old.

"When things are hard - and he said it is the important things that are hard - you have to lean into the pain."

The Road to Fascism: Paved with Vaccine Mandates and Corporate Collusion