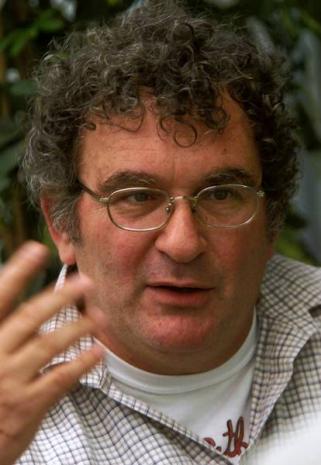 On January 8, Morris headlined his Haaretz op-ed "The day after Iran's tomorrow," saying:

"If Iran feels Israel or (America) are about to attack it soon, it could use missiles to attack attack Israel's military airfields and perhaps additional strategic installations as well, in a pre-emptive strike."

He knows Iran threatens no one. It hasn't attacked another country in over two centuries. Its neighbors aren't threatened. It prioritizes peace, not war.

Morris way overstepped. He's done it throughout his career. He substitutes lies for truth. More on his duplicitous comments below.

In August 2008, James Petras headlined "Racism and Genocide: Lies of Our Times." He discussed Morris. He called him a "Zionist genocide promoter." He "practices the Big Lie."

"Under some circumstances, expulsion is not a war crime. I don't think that the expulsions of 1948 (of nearly a million Palestinians) were war crimes. You can't make an omelet without breaking eggs."

"You have to dirty your hands." If Ben-Gurion expelled all Arabs, "he would have stabilized (Israel) for generations."

Genocidal slaughter is a small price to pay, he believes. Hitler tried purifying Nazi Germany the same way. America exterminated most of its Native People. Other rogue states tried and failed.

Morris' worldview is racist. It's fanciful, fabricated, and disturbing.

"I am completely unaware that Zionism ever aimed to 'rule the Middle East,' " he claims. Perhaps if he studied history before writing his version, he'd know better. More likely he doesn't care.

Israel's history is too disturbing to reveal. Morris and other revisionists suppress it. His "style is as revelatory as the substance of his totalitarian beliefs," said Petras.

He claims Iran threatens Israel. It's a Big Lie. Nothing whatever suggests it. His solution is "nuclear genocide." Israel has no choice, he claims.

He calls Israeli Arabs and Palestinians "wild animals." They're "barbarians." They should be locked up in "a cage." Treat them like "serial killers." It's shocking that this stuff gets published.

Morris "completely lost his moral compass." In 1948, Palestinians had to be "cleansed." Otherwise they'd be no Israel, said Morris. Ben-Gurion was a "transferist." He should have finished the job.

He distinguishes between ethnic cleansing and genocide. Ben-Gurion and likeminded hardliners did both. So did other Israeli leaders who followed him.

Morris attacked Ilan Pappe for exposing Israeli crimes. He turned truth on its head. He said Pappe "blacken(ed) the image of Israel and its leaders in 1948."

He's "one of the world's sloppiest historians and certainly one of the most dishonest."

Pappe did what dishonest historians and moral cowards like Morris avoid.

His-style slander should surprise. He's a serial liar. He has a "vicious tongue." He's "psychologically incapable of drawing the only conclusions possible from his own research."

It's shoddy and disreputable. Like Bernard Lewis and other pro-Israeli/imperial hardliners, he prioritizes lies, not truth. He defends the indefensible.

He's intellectually dishonest. He omits what's too disturbing to reveal. He justifies atrocities instead of condemning them. He claims Zionists had a divine right to create a Jewish state in Palestine.

He calls Islam problematic. It doesn't value human life like the West, he claims. It abhors "freedom, democracy, openness and creativity."

If Islamic states get nuclear, chemical, and/or biological weapons they'll "use them." If able, they'll "commit genocide."

He shames his academic credentials. His credibility is sorely lacking. Rancor and vindictiveness substitute for good sense. He's unapologetic about Israel's worst crimes.

He blames Arabs, not Jews. He elevates revisionist history to a higher level. It doesn't rise to the level of bad fiction. He distinguishes between good and bad genocide. He calls it a legitimate political tool.

He teaches Middle East studies at Ben-Gurion University of the Negev. He's one of a number of New Historians. He never met an Arab he didn't despise. He believes Jews are God's chosen people.

He writes propaganda, not history. He teaches this stuff to students. They're best advised to avoid him.

Last October, their Haaretz op-ed headlined "Answering Benny Morris: Historians should have a commitment to the truth," saying:

Morris "taught us that the official Israeli version (of history) is not always right." Later documents revealed an entirely different picture.

Morris once said historians often "forgot a basic rule of historiography: that official documents are suspect and that an effort should always be made to get to the original."

"This is especially true in the case of an ideological national movement which is immersed in an existential conflict with its neighbors, and for which survival and victory, and not universal values of morality and justice ‏(and certainly not historical accuracy‏), are the top priority."

His writing "completely discard(s) the rule which he himself laid down." With no legitimate corroborating evidence whatever, he "unhesitantingly adopted the official Israeli stance that 'there is no partner for peace.' "

"(O)ver the years, we have complied information which casts a dark shadow over (his) claims." Many sources supply it. Morris ignores indisputable facts. He's on the wrong side of history. He's "a committed propagandist."

"I've written enough about a conflict that has no solution, mainly due to the Palestinians' consistent rejection of a solution of two states for two peoples."

Many years ago it was possible. It longer is. Israel controls over half the West Bank and much of East Jerusalem. More is added daily. The only solution is one state for all its people. There's no other way.

Morris tried going out with a bang. He wrote a revisionist essay. "My aim is to open readers' eyes to the truth," he claimed.

"The objective is to expose the goals of the Palestinian national movement to extinguish the Jewish national project and to inherit all of Palestine for the Arabs and Islam."

"The Palestinian national movement has remained unchanged, throughout the different periods of the struggle, whether under the leadership of Hajj Amin al-Husayni or his successor, Yasser Arafat," he said.

"It did not even change during the years of the Oslo process. In the end, both sides of the Palestinian movement - the fundamentalists led by Hamas and the secular bloc led by Fatah - are interested in Muslim rule over all of Palestine, with no Jewish state and no partition."

He makes this stuff up. He's done it throughout his academic career. His worldview is upside down. He blames Palestinians for Israeli crimes. He's too set in his ways to change.

He sanitizes Zionist extremism. He reinvents history his way. He's dismissive of Palestinian rights. He's unapologetic about what he thinks right.

On January 8, he headlined his Haaretz op-ed "The day after Iran's tomorrow."

Perhaps he decided to keep writing after all. He took dead aim at Iran. He speculated on whether Israel would attack its nuclear facilities. He thinks it's possible, saying:

"There is still a reasonable possibility that Israel and/or the United States will carry out their threat and attack the nuclear facilities this coming spring or summer, if the sanctions can't halt the Iranian nuclear program."

He knows Iran threatens no one. He knows its nuclear program is peaceful. He pretends otherwise. As discussed above, he suggests Tehran may strike preemptively.

"Those who reject such a possibility claim that the Iranians will refrain from doing so because it will only provide Israel or the United States with a justification for reacting and striking at their nuclear installations, and then who can come to them with complaints?"

"But from the Iranian point of view, the considerations in favor of a pre-emptive strike may overcome their desire to be seen as a victim."

He admits that attacking "would contradict Iran's tradition of not initiating wars against its neighbors (not including small operations, which are carried out by messengers, like Hezbollah), but Iran's rulers may think that the threat is too great, and that an initiated attack is preferable to maintaining the tradition."

He claims Hezbollah rockets and Gaza "Jihadi organizations" may act supportively. He thinks something may happen in "days or weeks."

Whatever differences exist among Islamic factions, "hostility toward Israel" unites them. They "need to wipe the Jewish state of heretics off the map."

He claims an Israeli or US counterattack "will prompt Muslims to demand that their governments intervene."

"Save our (regional) brothers," they'll say.

Iranian leaders may act first, he claims. They "could be tempted to launch a preemptive strike to protect their nuclear project from attack."

Doing so is the surest way to destroy it.

He urged Israel to be forewarned and forearmed. A state of "readiness" should exist. It "should be poised on alert to block a sudden Iranian move. It is not improbable."

Morris has been ranting for decades. He lost all credibility long ago. He makes stuff up. He reinvents history. He prioritizes Big Lies. Age hasn't mellowed him.

Tunnel vision reflects his thinking. He's an embarrassment to legitimate historiography. He's too set in his ways to change.

"He knows Iran threatens no one. It hasn't attacked another country in over two centuries. Its neighbors aren't threatened. It prioritizes peace, not war." Remind me again please. Who broke into our Embassy and held our citizen's hostage for over a year? Was that Iraq? NO! Was that Israel?NO! "over two centuries" that is what 200 years? and 1979/80 was what? a scant 33/34 years ago. How quickly we forget...