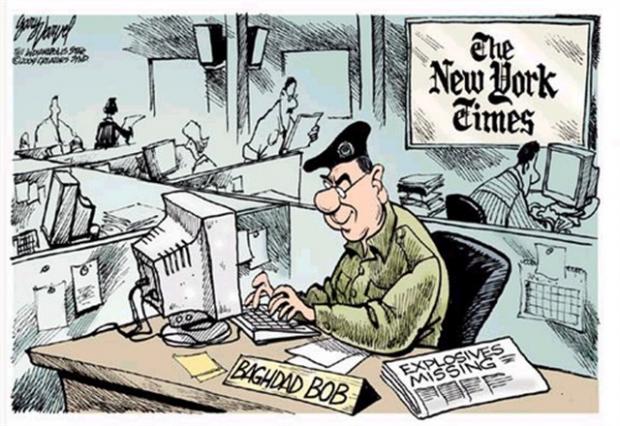 A personal note: I'm one of your fiercest critics. I'm certainly one of the most outspoken. My critiques are justified. I don't prepare them lightly.

I scrupulously strive for truth and full disclosure. If only Times writers, contributors and editors maintained similar standards.

You fall woefully short. I explained often in detail. I hoist you on your own petard. It gives me no joy doing it.

He personified evil. In June 1954, he met his match. Army lawyer Joe Welch challenged his spurious accusation about one of his attorneys having communist organization ties.

I watched him live that June 4 day. I and other viewers heard his powerful putdown, saying:

"Until this moment, Senator, I think I never really gauged your cruelty or recklessness." McCarthy shot back.

Welch angrily interrupted, adding "Let us not assassinate this lad further, senator. You have done enough. Have you no sense of decency?"

Overnight, McCarthy's popularity plunged. Senate censure followed. It ruined him. In 1957, he died a broken man at age 48. He wasn't missed.

I recount this because evil has many forms. McCarthy ruined many lives. Innocent people suffered grievously.

Media misinformation on what matters most exceeds it manyfold. Billions suffer globally at home and abroad.

A friend once suggested I contribute. I said my only chance is if a same-named publication exists on another planet.

My views aren't welcome. Nor are those of others who write truthfully about what matters most.

I target you because your articles, commentaries and editorials have global reach. What you report, worldwide media and influential figures repeat.

I'm independent. I choose topics and address them freely. No one directs me. I do it because it matters. I care about other people.

Those most disadvantaged, deprived, persecuted, harmed, and abused concern me most. A better world is possible. Everyone deserves equity, justice, rule of law protection, and real democracy. No other reasons drive me.

I call today perhaps the most perilous time in world history. It's true. It matters. It's frightening. Times reports should explain. Instead they support dark forces imperiling us.

I agonize over why you back wrong over right. Replicating what I and others like me do could improve millions of lives globally. You could deal warmongers a heavy body blow. Perhaps a fatal one.

You could challenge both parties responsibly. They have much to answer for. They betray their constituents and others that spurn them. You could demand they:

• put money power back in public hands where it belongs;

• save and improve social America;

• obey, not violate international, US statute, and constitutional laws;

• get money entirely out of politics;

You could condemn bipartisan anti-democratic policies. They're pro-war, pro-business, pro-privilege, pro-super wealth, anti-progressive; anti-dissent, anti-freedom, and anti-government of, by, and for everyone equitably and fairly.

Obama replicates the worst of George Bush. It's your job to explain. Instead, you support what you should condemn. Honest journalism demands better.

You back wrong over right. I explain often. I expose your managed news deception.

It's never to late to change. Supporting what's right is its own reward. Try it sometime and see. You may never look back.

Do imperial wars bother you? Does human suffering matter? Is business as usual OK? Are sham elections? Is democracy for the few alone?

Do corporate interests count more than popular ones? Do wealth, power, privilege, and unchallenged dominance alone matter? What about an unconscionable growing wealth gap?

How about corporate and political lawlessness? What about a private banking cartel controlling America's money? Is looting the federal Treasury OK? What about reckless money printing OK to serve them?

Do growing poverty, homelessness, hunger and despair concern you? What about deepening social decay symptomatic of national decline?

How about growing millions worldwide calling America a pariah state for good reason? Waging political, economic, social, and hot wars put it in a class by itself.

Are you concerned? Is this the America you support? Dare you call it beautiful?

You have global clout. You could use it responsibly. You could expose what's wrong and help reverse it. You'd be heroic for trying.

It bears repeating. Doing the right thing is its own reward. So is good journalism. Try it sometime and see.

Try publishing "All the News That's Fit to Print" for real. Perhaps you'll never look back and go another way.

I and millions of others will be loyal supporters. My articles will eulogize, not condemn you. How about that offer you can't refuse. Think about it.

Western print and broadcast media match or exceed the worst of NYT misreporting, commentaries and analysis. They all bear full responsibility.  Readers, viewers and listeners are systematically betrayed. They're lied to.

Their daily fare isn't fit to print or broadcast. They feature everything but truth, the whole truth, and nothing but the truth on what matters most.

Their unconscionable warmongering is worst of all. When America goes to war or plans one, they march obediently in lockstep. They represent a virtual Noah's Ark of scam artists.

Savvy readers and viewers avoid them. Maybe some day everyone will choose credible alternative sources. Perhaps doing so will make major media a public service. Imagine the difference that would make.