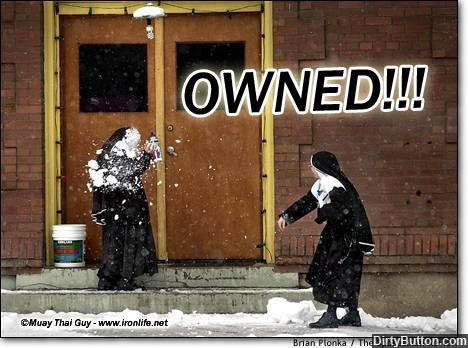 Police states operate that way. Israel is one of the worst. It spurns rule of law principles. It turns democratic values on their head. It targets Palestinians for praying to the wrong God.

Two ultra-Orthodox men were struck. Ten days ago, six Palestinians were apprehended. "Three others were arrested over the incident last week."

According to the old saying, "Sticks and stones will break my bones, but names will never harm me." Nor will snowballs.

Kids throw them at each other often. It's ritualistic. It's part of fun and games. Anyone growing up in northern climes remembers them fondly. Arrests never followed.

Alleged attacks and cursing occurred "near the Nablus Gate leading to the Old City of Jerusalem."

An investigation was ordered. Hasidic extremists "refused to lodge a complaint." The alleged incident appeared blown out of proportion.

Palestinians in Israel are in the wrong place at the wrong time. Racist persecution targets them. Daily attacks occur. Deaths, injuries and arrests follow.

Haaretz stresses what it calls "Israel's slide into….fascism and apartheid." It calls Judaization "racism." It discussed "Judaizing the Galilee."

It's the same throughout Israel and Occupied Palestine. Upper Nazareth Mayor Shimon Gapso calls his job a mandate "to make the Galilee Jewish."

"The city's residents and I, as their leader, overwhelmingly support the principle that Upper Nazareth must fulfill this mission," he said.

He blocked opening an Arab school for 1,900 students. Not on his watch, he said.

Nazareth is predominantly Arab. It's called the Arab capital of Israel.

Upper Nazareth (Nazareth Illit) is mainly Jewish. It lies within Nazareth. Arabs comprise 20% of the population.

Children have to travel outside the community for school or choose expensive private ones. Few families can afford them.

Haaretz said he wants "legitimate cover for every benighted racist position that sees the presence of Arabs in the Galilee or anywhere else a national threat."

Yishai represents the worst of Israeli governance. He menaces Jews and Arabs alike. He wants Gaza "sen(t) back to the Middle Ages." He wants its infrastructure destroyed. He's mindless of how many die or suffer.

Haaretz said "Israelis who oppose racism and discrimination - Arabs and Jews alike - have no choice but to vote for parties that will fight both phenomena." Don't expect them to make the right choice. So few exist.

"The parents' demand to enable their children to go to school in the city they live in is a basic right, and no city or mayor may deny it."

"Upper Nazareth's mayor and every Israeli mayor would do well to advance justice and equality among his city's residents."

ACRI's helping Upper Nazareth Arabs. It supports their "protracted struggle to establish an official educational institution in the city."

ACRI Attorney Ashraf Elias told Gapso and Sa'ar that failure to allow it "constitutes a serious breach" of their "duty to act equally for all of the city's residents and that this infringes on the Arab residents' right to education."

Israeli law and courts affirm it. It doesn't matter when prominent officials spurn what they're obligated to uphold.

His age (16) notwithstanding, "he won't be voting in Tuesday's election." Israeli soldiers killed him. They shot him four or more times in his head, back and thigh.

"The soldiers who (killed) him will vote on Tuesday, because (Israeli-style) democracy is like that."

The "elephant in the room" goes unnoticed. "The monster at the door, who we try to ignore by saying, 'If we won't look at it, it won't exist.' "

"This is the worst deception of this election, the sickest lie of Israeli democracy…." Israelis and candidates alike promote it.

In real democratic societies, demands for justice would have followed Samir's death. It would have become a major campaign issue.

In the past week alone, four other Palestinian youths were killed. In November, Israel soldiers murdered Rushdie Tamimi.

"How on earth can Israel be considered a democracy," he asked? "How can it not be called an apartheid state? Why is nobody even discussing the issue?"

"Samir was murdered in cold blood." So are many other Palestinians. "There's no other way to describe" what occurs regularly.

Samir and others like him symbolize what's wrong with Israel. Palestinians and Israeli Arabs are fair game. Lies and coverup suppress official policy.

He "promises four more years of the very same futile path." What's good for him harms most others. Israelis aren't wise enough to know. They're mindless, out of touch, or don't care.

They'll have themselves to blame for doing the wrong thing. They support what demands condemnation.

Rehabilitating trust Israel lost awaits "a new direction." The current one is self-destructive. Who knows if it'll ever come. Nothing in prospect suggests it.

Micah Peltz is an American rabbi. He serves Temple Beth Sholom Cherry Hill, NJ's congregation. He's also a regular Haaretz contributor. On January 20, he headlined "Are the leaders of today the leaders we deserve?"

On January 22, Israelis vote. On January 20, Obama's sworn in. "In both countries, there seems to be a feeling of dissatisfaction with the choice of leaders," said Peltz.

They're more concerned about who they dislike than prefer. Leadership worth supporting is sorely lacking. It's true in Israel and America.

"How do our leaders influence our generation," asked Peltz? "Do we have the leaders that we deserve?" Not in Israel or America, he laments.

Too few others understand today's grim reality. Fewer still responsibly confront it. It's true in Israel, America and elsewhere.

When ordinary people deserve better, the worst of times loom.