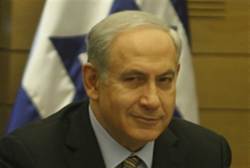 Twenty-four hours and counting. On Tuesday, January 22, Israelis vote. They're as mindless and out of touch as Americans.

Palestinians, regional states, and others have cause for concern.

Pollsters asked respondents what issues matter most. Socio-economic concerns by far ranked highest. Nearly half said they determine their choice.

Likud and other right-wing parties force-feed austerity. Neoliberal extremism affects Israel like Western states. Voters perhaps don't understand. They have themselves to blame. They favor parties harming their own self-interest.

On January 18, Haaretz headlined "Garbage time: The Likud-right-religious bloc ahead by a large margin," saying:

It's "a foregone conclusion."

"Likud-right-Haredi bloc is" way ahead. "Likud-Yisrael Beiteinu (looks) set to win" about double "as many seats as the next-largest party."

Netanyahu will get four more years. Imagine what's likely after all the harm he caused. He'll get public affirmation to inflict it. He'll take full advantage. Jews will be harmed like others.

Most Israelis turn a blind eye to what matters most. They'll vote opposite their interests.

Do it "to halt Israel's slide into political isolation, fascism and apartheid."

"The result (is) intense international isolation, a rift in the relationship with (America), and a terrifying vision of Israel's future."

Israel's dominant right-wing represents the "most radical lists of candidates ever." They threaten fundamental freedoms.

Israel will "be better off if (Israeli Arabs) vote in high numbers and strengthen Hadash, Balad and the United Arab List-Ta'al against right-wing persecution."

Ordinary Israelis and Arab citizens have common interests. Undecided voters must choose wisely. What matters most is clear.

Israelis are as mindless as Americans. Don't bet they'll do the right thing. Polls confirm it. Political rhetoric beguiles them.

Reason and rational thinking aren't their long suits. Family and other daily priorities matter more than who wins or loses.

"Sharing the burden" is stressed. Doing so belies its one-sidedness. Super-rich elites grow richer. Dominant corporations get whatever they want.

Ordinary Israelis suffer at their expense. Among developed countries, Israel, America and Britain are the most unequal. Conditions are getting worse, not better.

Social justice is eroding. It's on the chopping block for elimination. Sink or swim is policy. Israelis are too out of touch to realize how much they're harmed.

Israel has no enemies except ones it invents. Dominant parties stress "security threats." Fear mongering is policy. Doing so distracts.

On January 19, the Economist headlined "Which way for Binyamin Netanyahu?"

It's an "open question whether (he) thinks he can get away with continually cocking a snook at" Western governments, "in particular America's, that have become increasingly frustrated by" peace process failures.

Can Netanyahu shift course, or is "his chief mission….stop(ping) Iran from getting a nuclear weapon?"

Don't bet on it, said the Economist. Peace prospects with Palestinians "look remote. Israel's coming election may make it even more so."

It doesn't matter whether he chooses ultra-nationalists or centrists as partners. Peace process hypocrisy is official policy. Palestinians never had a legitimate partner.

"Netanyahu has stated very clearly that he is adopting a wait-and-see policy." He won't make concessions. He prioritizes other concerns.

"By and large….there isn't much hope."

"I think that the way that Israeli politics is construed it makes it very difficult for parties in opposition to have any real effect anyway," he said.

"And as much as you may see some coalescing around what they're calling the centre-left bloc….I think it's going to be extremely difficult for them to put forward any kind of meaningful opposition."

It shows "how moribund much of the political process in Israel is."

He defied Obama so far "without any real cost."

There's "a strong chance that future generations will (regard him) as a man who fatally undermined" Israel's future.

Palestinian rights are a major unaddressed issue. Occupation harshness has been policy for almost five decades.

"It must be tempting for Israelis to believe (it) can last forever. It cannot."

Professor Mazin Qumsiyeh teaches at three Palestinian universities (Bethlehem, Birzeit, and Al-Quds). He previously taught at Yale, Duke and the University of Tennessee.

He's chairman of the Palestinian Center for Rapprochement Between People. His books and other writing focus on Israel/Palestine.

On January 16, he headlined "A Choice Between Right-Wing Politicians and Extreme Right Wingers," saying:

The political landscape looks grim. It's "poised to finally fulfill its destiny of fascism. Israelis will….continue to be lulled into supporting the unthinkable."

"The inevitable result" is denying millions of Palestinians their rights. They're occupied, displaced, and isolated. Endless wars and persecution afflict them.

He threatens to attack Iran. He risks embroiling the entire region in conflict. He prioritizes land theft and settlement expansions. He thumbs his nose at world opinion.

Odds favor him to remain prime minister. He'll get another four years. Worse than ever times loom. Israelis will have themselves to blame.

They'll have to explain why they voted against their own self-interest. It won't be for the first time.

1 Comments in Response to Israelis Vote

I see that Lendman is still cranking out the Saudi-greased anti-Israel agitprop. No surprise, an election is proof to him of lack of democracy :)

Here's a clue to what's really going on:

The War Against the Jews