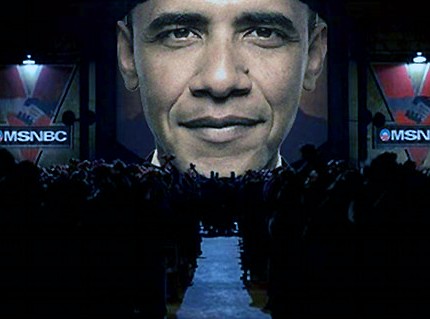 On January 20, Obama began term two. After all the harm he caused so many, imagine how much more he plans.

He broke every major campaign promise made. He mocks legitimate governance. He lawlessly serves powerful monied interests. They own him.

He spurns peace. He's waging multiple direct and proxy wars. He's got new targets in mind. He supports some of the world's most ruthless despots.

He spends more on militarism than all other countries combined. He's done it when the only enemies America has are ones it invents.

He institutionalized tyranny. He targets dissent. He elevated abuse of power to a higher level. He imprisoned some of America's best and brightest. He's got others in mind.

He decides who'll live or die. His kill list chooses targets. He designated himself judge, jury and executioner.

He supports the worst of Israeli crimes of war, against humanity and genocide. They partner in ravaging one country after another.

He authorized indefinite detention without charge or trial. He approved doing it to Americans. He wants them held in military prisons out of sight and mind.

He promised to close Guantanamo. It's still open. He endorses torture by permitting it. He invents nonexistent security threats as justification.

He ignores political corruption at the highest levels.

He wants education made another business profit center. He rationed healthcare to enrich insurers, drug companies and large hospital chains.

He put bankers in charge of financial reform. It's a stealth system for global money control. They game the system for profit. Their business model is grand theft.

He increased poverty, unemployment, homelessness, hunger, and despair. He plans more of the same in term two.

He wants America's social contract destroyed. He wants ordinary people on their own sink or swim. He conspired with Republicans and key Democrats to assure it. He pretends otherwise. He conceals what too few understand.

As Obama begins term two, "his team looks back at the four years that brought them to this point. (Their) story is, unsurprisingly and perhaps out of necessity, a romantic one."

Former White House social secretary Desiree Rogers "kept thinking about (her) grandfather and how he would feel had he lived to see this day, because in so many instances the gentlemen that served the president looked like" him.

Former White House counsel Gregory Craig said "if the president does not say all the words of the oath of office, then he is not the president of the United States."

He omitted saying it helped business and elite interests at the expense of popular needs.

Former White House chief of staff Rahm Emanuel once said a crisis is too important to waste. Things not possible other times can  happen then. He didn't mean populist ones.

Other former White House officials were quoted. Misinformation substituted for truth and full disclosure. The Times leaves inconvenient facts unexplained. All the new fit to print is excluded. It's standard policy to omit what's most important.

Obama "took office in 2009…." He promised "inclusiveness and optimism…." His "leadership (made) growth and renewal very real."

"We hope, given the opportunity, he will rededicate himself to being a president who is bigger than party and above partisan squabbling."

Instead of telling readers what they most need to know, Post editors lied. They concealed disturbing truths. It's standard practice. They do it all time.

Straightaway in office, Obama fell from grace. His priorities revealed a Judas. He betrayed constituents who trusted him. Their hopes went unfulfilled.

"That was the message of his reelection campaign, and we think it is correct."

Obama wrecked the economy. He looted the nation's wealth. He spurns popular interests. He doesn't give a damn about ordinary people. He prioritizes wealth, power, privilege, and dominance.

"In his first term," Post editors claim he "completed some unfinished work of the New Deal and Great Society."

He prioritizes wrecking both. He plans completing what's unfinished in term two. Post editors conceal the worst of his agenda. They sanitize what demands condemnation.

They serve as an official administration mouthpiece. They're paid to lie. They're not alone.

Achieving the "legacy thing" may be harder than he imagines, he said. He's "already a historic president as the first African American to be elected, but there is a chasm between being historic and being great."

Too bad Samuelson didn't explain why. Historical analogues he discussed misstated facts, misinterpreted others, and omitted what's most important.

He prioritizes austerity. He wants Social Security, Medicare and Medicaid cut more than already. He wants Obama to target them more than planned.

He wants ordinary people, those most disadvantaged, and America's elderly to bear the burden of deficit cutting. Obama hasn't done enough, he said. He's "profoundly hostile to the national interest."

Samuelson deliberately misleads readers. He shames himself in the process. He's got plenty of company.

Obama "learned at least three important lessons from" term one. They shaped his thinking.

"Confrontation sometimes works better than conciliation." He "hoped to be a bridge builder." More recently, "he's been more of a bridge burner."

He "told Republicans….he flatly refuses to negotiate over the debt ceiling, and warned that if a showdown over the issue damages the economy, it will be on their heads."

Decades ago, both parties agreed to destroy America's social contract. Obama accelerated the process. Out of sight and mind, he, key Democrats, and Republicans pursue it.

Rhetoric belies official policy. Both parties are in lockstep. Not a dime's worth of difference separates them. They agree on issues mattering most.

McManus claims otherwise. He'll use term one lessons learned going forward, he said. He'll "spend more time enlisting ordinary voters in his battles - over the debt ceiling, gun control and everything else."

He'll "rally public" sentiment to support him. He's "turning his presidential campaign into a permanent network called Organizing for Action."

He'll stop short of being "over-ambitious." He entered office in term one "with a huge electoral mandate." He controlled both houses of Congress.

He'll stress "soaring hopes and national unity." Obama today is the "same man he was four years ago, but he's a very different politician."

Obama indeed is no different. He spurns popular interests. He betrays constituent supporters. He wages war on truth. He mocks legitimate governance.

He's escalating greater harm. He's doing it globally. He menaces humanity. It may not survive another four years.

Hundreds of thousands assembled. They filled the National Mall. Few got close enough to see much. Why they came, they'll have to explain.

Obama repeated Sunday's oath. He promised "to the best of (his) ability, to preserve, protect and defend the Constitution of the United States."

He lied like he always does. He's a serial liar. He spurns international, constitutional, and US statute laws. He does so with impunity.

He mocks legitimate governance. He shames what he claims to support. He never did, doesn't now, and won't in term two.

He's a war criminal multiple times over. So are top administration officials and key congressional leaders. The criminal class in Washington is bipartisan. They get away with murder and much more. They benefit by doing what's wrong.

His opposition to Vietnam aggression got him killed. He called America "the greatest purveyor of violence in the world."

He won civil and voting rights victories. His earlier triumphs are now lost. Things are worse now than then.

Martin Luther King Day is the only national holiday commemorating an African American. Doing so elevates hypocrisy to a higher level.

King was murdered for doing what's right. So are others less prominent. It's not hard knowing who has motive, cause and opportunity.

US dark forces take full advantage. America's best, brightest, and most noteworthy are targeted. So are others abroad. Washington wants unchallenged dominance. Nothing stands in its way seeking it.

James Earl Ray was framed. He had nothing to do with killing King. He got 99 years. He wasn't tried.

At age 70 in April 1998, he died. He was denied justice. It's the American way. Innocent victims suffer for state crimes. Ray is one of countless others. Numbers increase daily.

Obama's responsible for many. Imagine what's planned ahead. It bears repeating.

Obama menaces humanity. It may not survive another four years.