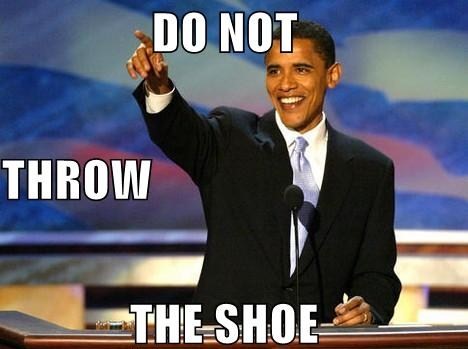 A previous article discussed America's quadrennial exercise in hypocrisy. It's institutionalized. It conceals the nation's dark side.

America is on a fast track toward tyranny and ruin. Police state laws threaten everyone.

Activism and dissent are marginalized. Increasingly they're not tolerated. Supporting what's right is called dangerous to national security.

Peaceful demonstrations are attacked and disrupted. Protesters are called terrorists. They're arrested and jailed for expressing constitutionally guaranteed First Amendment and other rights.

Authorities claim doing so gives material support to enemies. None exist except invented ones.

Liberalism, progressive change, and populism are ideologically opposite his agenda. Militarism, corporatism, elitism and privilege reflect it.

Obama represents rogue government. He deplores democracy at home and abroad. He's committed to preventing it. He targets it for destruction where it exists.

He spurns rule of law principles. His first term waged war on freedom. He wants it destroyed altogether.

Previous articles explained. He institutionalized tyranny. He targets dissent. He elevated abuse of power to a higher level.

He authorized indefinite detention without charge or trial. He approved doing it to Americans. He wants them held in military prisons out of sight and mind. He wants them denied judicial fairness.

He decides who'll live or die. His kill list chooses targets. He designated himself judge, jury and executioner.

It's on the chopping block to be destroyed. He wants it eliminated altogether. Term one imposed punishing budget cuts.

Families needing help to heat homes in winter were harmed. So were students relying on Pell Grants.

All men are created equal, Obama claimed. America "cannot succeed when a shrinking few do well and a growing many barely make it."

Obama did more than any previous president to increase an unconscionable wealth gap. It's unprecedented and escalating.

He, key Democrats, and Republicans are in lockstep. Not a dime's worth of difference separates them. They pretend otherwise. So do media scoundrels. Illusion substitutes for reality.

Obama challenged Republicans disingenuously. He called on them to back his agenda, saying:

"Progress does not compel us to settle centuries-old debates about the role of government for all time - but it does require us to act in our time."

"For now decisions are upon us, and we cannot afford delay. We cannot mistake absolutism for principle or substitute spectacle for politics or treat name-calling as reasoned debate. We must act."

He claimed austerity protects America's social contract. He pretends destroying it preserves it. He professed a commitment to securing Social Security, Medicare and Medicaid.

His policy measures aim to destroy them. High-sounding rhetoric belies his intentions. He repudiates what he claims to support.

He considers welfare a four-letter word. He slashed hundreds of billions of dollars from Medicare and other safety net programs.

At the 2004 Democrat convention, he said "There's not a liberal America and a conservative America. There's a United States of America."

On Monday, he echoed the same theme. What makes us Americans is sharing the nation's founding principles, he said. He urged advancing them with "common effort and common purpose."

He disingenuously defended social benefits. "We the people still believe that every citizen deserves a basic measure of security and dignity," he said.

Populist programs "do not make us a nation of takers. They free us to take the risks that make this country great."

In 2009, Obama said America "must play its role in ushering in a new era of peace." He's waged multiple direct and proxy wars. He plans more. He targets independent governments. He wants pro-Western puppet regimes replacing them.

Columnist Dan Balz said his "speech reveal(ed) a different leader." He "never lacked for confidence, but rarely has that attribute been on display as clearly as on Monday…."

He "underscored the distance he has traveled after four contentious years in office." His "first campaign was aspirational."

"Monday's speech conveyed the ambitions of a president looking" to build his legacy. His "priorities….will cheer" liberal Democrats and "alarm many on the right."

Instead of telling readers what they need to know, Balz lied. Other media scoundrels do the same thing. Harming people is portrayed as helping them. Neoliberal policy is called populist. Permanent war reflects Washington's peace agenda.

America was never beautiful and isn't now. Privileged elites alone benefit. The worst of all possible worlds affects others. Escalated harshness is planned.

Obama's "decision to collect unlimited corporate cash for his inauguration, and to disclose less about donors than he did four years ago, has triggered broad speculation about what he really plans to do with the money."

"Theories range from the claim that Obama is getting a jump-start on funding his presidential library to conjecture that leftover campaign cash will prop up his grass-roots organizing operation, reportedly to be renamed Organizing for Action."

"Some say that it may even line the pockets of loyal campaign consultants."

"Corporations make donations to events like the inaugural festivities because they get something back in return. It's not a bribe, but they do expect to get their calls returned faster, their proposals viewed more favorably."

"Here's a guy who four years ago was Mr. Transparency, vowing to change the business was done in Washington, and how it all looks very much as its business as usual once again."

Straightaway in term one, his true colors were shown. He represents a corrupted system too dysfunctional to fix. Corporate cash reflects the tip of the iceberg. There's plenty more following inaugural donations.

Influence buyers know you have to pay to play. The more given, the more returned manyfold. Obama's hands are as dirty as the worst of them. He's got four more years to inflict more harm. Expect him to take full advantage.