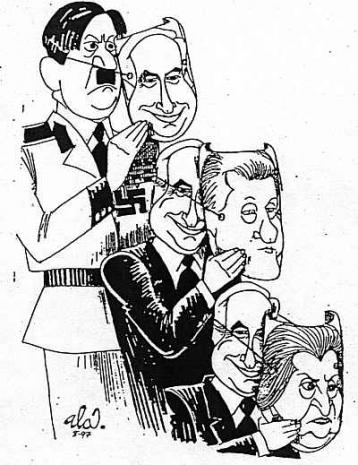 Peace is a non-starter. A so-called process never existed and doesn't now. Israel won't tolerate it. Netanyahu scorns it. He calls it a waste of time.

Palestinians and Israeli Arabs have the greatest cross to bear. They're marginalized, denied, persecuted and brutalized.

Institutionalized racism terrorizes them. Their rights are off the table. Israeli Arabs are enfranchised in name only.

Millions of Occupied Palestinians are entirely denied. They're disenfranchised. They had no say in Tuesday's election. Around 600,000 West Bank/East Jerusalem settlers alone got to vote.

Netanyahu was weakened. He'll remain prime minister. "Centrist" partners will join him. Doing so will "temper his hard-right line" rule.

"The rejection of religious parties by an overwhelming majority of voters sends a signal that Israelis are tired of sectarian divisiveness and the often-oppressive policies that religious leaders have championed."

The Times expressed "hope that the new government could be more receptive to a peace initiative. The vote suggests that if it is not, Israelis may give even more support next time to a centrist coalition not led by Mr. Netanyahu."

Israelis care more about quality of life, economic well-being, and security than international politics and peace negotiations. According to Israel Today:

"Compared to previous elections when the peace process was still one of, if not the primary topic, the 2013 election is further evidence that the land-for-peace process is dead in the eyes of most Israelis."

Peace process politics reflects hypocrisy. It was stillborn from inception. It's no exaggeration calling it the most specular deception in modern diplomatic history.

Former prime minster Yitzhak Shamir said he wanted to drag out talks for a decade. Doing so would facilitate settlement expansions, he explained.

Apartheid is policy. So is colonization. Israel wants all valued Judea and Samaria areas Judaized. It claims Jerusalem as its exclusive capital. Ethnic cleansing is policy. At most, Palestinians will get worthless cantonized scrubland.

They got nothing for renouncing armed struggle, recognizing Israel's right to exist, and leaving major unresolved issues for later final status talks. They're still waiting.

"The Israeli Center Lives," said Times contributor Roger Cohen. Netanyahu has "himself to blame." He "had no new ideas."

"The price of his survival….will almost certainly be a pivot away from the right toward a centrist coalition."

"The Israel that emerged from (Tuesday's) vote is not the rightward-drifting, annexationist-tending, religious-lurching nation it has become fashionable to portray."

They deplore peace. They embrace violence, not peaceful coexistence. They endorse confrontation over diplomacy.

They believe in strength through militarism, intimidation, and naked aggression. They menace Jews and Arabs alike. They threaten neighboring states and humanity.

The Washington Post said Netanyahu's "weakened" position "raised the prospect of a more centrist government that could ease strained relations with Washington and signal more flexibility in peace efforts with the Palestinians."

The Los Angeles Times said Netanyahu's "disappointing performance will require him to reach out to the center in order to form a governing coalition."

Haaretz contributor Ari Shavit highlighted "The dramatic headline of this election: Israel is not right wing."

He's Haaretz's resident hawk. He claims King Bibi's reign ended. He'll remain prime minister but won't rule. "His life will not be easy, not politically and not in terms of policy."

Israel is more centrist, says Shavit. Imagine calling a dog a cat. Israel is more rightwing than ever. Election results left no doubt.

Haaretz's Chemi Shalev said they showed voters "elected a government that is bound to be more centrist, more moderate, more secular, more pluralistic and more inclusive than its predecessor or any of the alternatives that seemed plausible just a few short days ago."

Hardline fascist rule is policy. Worse than ever times loom. Events eventually awaken people to reality. Perhaps Israelis will realize they've been had. It bears repeating. They've got themselves to blame.

Alan Dershowitz is a notorious bigot. He's a longstanding Islamophobe. He believes in unique Jewish suffering. He's mindless of all others.

He's a committed Zionist and Israeli apologist. He legitimizes its crimes of war, against humanity and genocide. He believes waging war achieves peace.

He advocates torture and targeted assassinations. Francis Boyle once called him an "infamous self-incriminating war criminal."

He "publicly acknowledged being a member of a Mossad Committee for approving the murder and assassination of Palestinians, which violates the Geneva Conventions and is thus a grave war crime."

He's "unfit" to educate aspiring lawyers. He got prominent Haaretz op-ed space. He turned truth on its head. He said election results shifted Israeli politics "toward the center and away from the extremes."

It's more likely to "have more flexibility in dealing with the Palestinian Authority and in moving toward a two-state solution."

Two states were once possible. No longer. Israel controls over half the West Bank and much of East Jerusalem. More is added daily. Peaceful resolution requires one state for all its people. Nothing else works.

Dershowitz is hardline. He believes only Jewish rights matter. He wants Palestinians marginalized and denied. He favors accelerated settlement construction.

He claims Netanyahu "very much wants to be the person who brings about peace…." He spuriously calls Iran an existential threat.

He says Israel reflects real democracy. Its "people and (their) leaders (will) prove to the world that (they) know (their) own best interests and (are) in the best position to implement them."

"That is what democracy is all about, and Israel's recent elections display democracy at its best."

Don't send your children there, urges Francis Boyle. Dershowitz, other notorious faculty members, and deans "are no longer fit to educate lawyers. They are a sick joke and a demented fraud."

"Harvard is to Law School as Torture is to Law." It's a "Neo-Con cesspool." Dershowitz's presence bears much responsibility. He gives higher education a bad name. Avoid him at all costs.

1 Comments in Response to Fascism Wins Big in Israel

Election Results from the Only Democracy in the Middle East