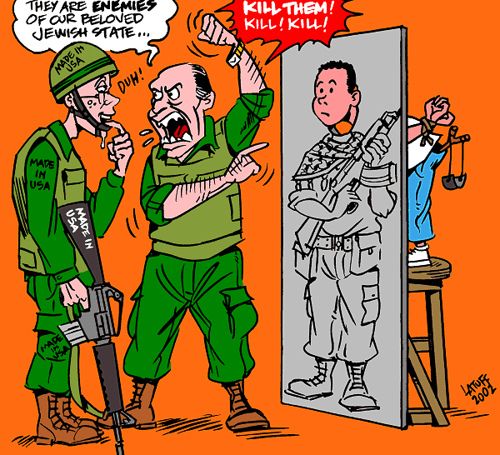 Freedom requires committed activism. Liberation depends on working for what Israel denies. The alternative is more of what's too intolerable to bear.

Bi'in's weekly peaceful anti-Separation Wall protest was attacked. Friday's was dedicated to Lubna Hanash. On Wednesday, Israeli forces murdered her in front of Al-Quds University. They did so in cold blood.

She was a fourth year political science student. She was walking peacefully with friends. Israeli soldiers approached her in a civilian car. They shot and killed her. They'll have to explain why.

Media scoundrels ignore what happens. It's part of Palestinians' daily life. Most people can't imagine what they endure. They can explain best of all.

From day one post-conflict, Israel violated Pillar of Cloud memorandum of understanding terms. They state:

(2) Palestinian resistance groups to halt rocket and other attacks.

Implementation procedures remain to be decided. Palestinians are still waiting. It hardly matters. Israel violates all agreements made. Negotiations achieve nothing.

Over 19 years later, nothing changed. Things now are worse than ever. Israel bears full responsibility.

Netanyahu and likeminded hardliners agreed all post-Pillar of Cloud hostilities would halt.

They lied. They never stopped. Deals don't reflect or determine policy. Crimes against humanity continue. They do so with impunity. Palestinians are sitting ducks. There's no place to hide. Israel takes full advantage.

On January 23, soldiers killed 15-year old Aida refugee camp, Bethlehem resident Saleh Elamareen. He was targeted at close range and murdered. Witnesses said he did nothing provocative. Soldiers used him for target practice.

Adnan Hasan is a 17-year old youth. He was traveling in a car peacefully. Soldiers stopped him at Huwwara checkpoint.

"When I said I was from Kafr Qaddum, (they) all of a sudden started to beat me and insult me, saying that it was in retaliation for the weekly rally in my village," he said.

On January 25, soldiers on Israel's side of the border opened fire. Dozens of Gazans were targeted. Multiple attacks took place. Farmers were targeted in their fields. So were youths and others.

At least five injuries were reported. According to Ministry of Health spokesperson Dr. Ashraf Al-Qodra, attacks are ongoing. Since Pillar of Cloud ended, five Palestinians were shot and killed. Dozens more were injured.

At least 30 fishermen were kidnapped at sea. Their vessels were damaged or confiscated. At least six times in the past week, they were targeted with live fire.

Last Sunday, extremists boarded an Israeli bus. Arab school children were heading home from classes. They were insulted, spat on, and harassed. At least one child was physically attacked.

The father of one child said Arab children endure this treatment and worse regularly. He worries whether his child will return home each day safe.

Other parents have similar concerns. In the past week alone, Israeli soldiers attacked Palestinians daily. Fifty West Bank incursions were conducted. Dozens of arrests followed. Children were treated like adults.

Excessive force is official policy. Israel doesn't care if Palestinians live or die. They're denied all rights. They're dispossessed, persecuted and assaulted ruthlessly. They're unsure each day if they'll survive.

Israel's Open University Professor Yagil Levy teaches sociology, political science and communications. His doctoral dissertation discussed "The Role of the Military Sphere in the Construction of the Social-Political Order in Israel."

He called Pillar of Cloud a colossal failure. "In military terms, of course, the operation can be treated as an achievement, as the government ministers are trying to do," he says.

"In the balance of blood, Israel may have killed about 160 Palestinians while only six Israelis were killed."

Nearly 200 Palestinians were killed. Around 1,400 were injured. Most were noncombatant men, women, children, infants and the elderly. Levy downplayed what happened.

He added that Pillar of Cloud "revealed to Hamas and the world Israel's weakness and the limits to its freedom of operation." He called it Israel's "death hierarchy."

His recent book discussed it. It's titled "Israel's Death Hierarchy: Casualty Aversion in a Militarized Democracy." He claims substantial changes exist in the "blood price" Israelis are willing to pay in military confrontations.

The IDF is now weakened, he believes. Its ability to accomplish missions are compromised. The 2006 Lebanon war and Pillar of Cloud fell short.

In other words, Israel's reluctance to sustain casualties, he believes, sacrifices greater victories. He's unconcerned about how many casualties enemies incur. Noncombatant deaths and injuries don't bother him.

He referred to civilians. They're no different from combatants, he claimed. Other Israeli commanders expressed similar sentiments. Targeted and indiscriminate mass murder and destruction is official policy.

Levy's only concerned about victories. Only winning matters. In "Israel's Death Hierarchy," he discussed two axes. One relates to "the level of freedom of choice of the social group the state is likely to sacrifice."

In other words, what price is acceptable for victory. His other notion derives from "the political cost that results from" choices made. It depends on the "political and social power of the group" paying the price.

Dominant Israeli hardliners agree. They control Israel's new government. It's ideologically extremist. It's Israel's worst in history. Expect Palestinians to bear a greater than ever cross.

Expect greater state terror ahead from likeminded Levy ideologues. Intifada activism is needed. Expect it to erupt sooner or later. Liberation depends on it.

Cart Before the Horseman has stepped in it again. ISRAEL is to blame for the cowardly Muslim jihadists in Palestine pumping their children with hate and sending them with rocks to fight Israeli troops?

Speaking of who started it, it was MUHAMMAD, who pumped the Arabs with hate and drove them to steal Israel way back in the 700s. The Jews never signed any of their rights to their homeland away. Modern Muslims are SQUATTERS. Israel needs to proact against "Intifada" by expelling all Muslims from the Nile to the Euphrates and telling them to stick to their vast Arab Ummah known for not being fit to live in, and bug off THE JEWISH STATE OF ISRAEL forever.