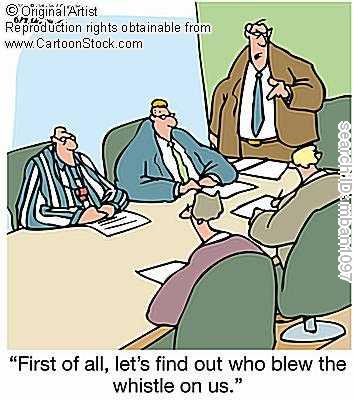 At perhaps the most perilous time in world history, exposing vital truths takes on greater urgency than ever.

The ACLU says "leak detection, prevention, and punishment is cause for alarm."

"National security must be protected and properly classified information must be kept safe. However, this cannot be at the expense of a free, open and informed society."

"When even one American - who has done nothing wrong - is forced by fear to shut his mind and close his mouth, then all Americans are in peril."

The National Security Whistleblowers Coalition (NSWBC) is an alliance of whistleblowers. In August 2004, Sibel Edmonds founded it. It's independent and nonpartisan. She serves as president.

Its members include "current or former federal employees or civilians working under contract to the United States who, to their detriment or personal risk, bring to light fraud, waste, and abuse in government operations and agencies when such improprieties compromise the national security of the United States."

Since 1977, it's been "the nation's leading whistleblower protection and advocacy organization."

Americans Who Tell the Truth (AWTT) honors those who do so. It's "dedicated to the belief that a profound sense of citizenship is the only safeguard of democracy and the best defense of our social, economic, and environmental rights. "

It "teaches the courage to act for the common good." Doing so, it believes, "inspire(s) hope in the future."

On January 23, ATWW and GAP honored CIA/anti-torture whistleblower John Kiriakou. "Even if torture works," he said, "it cannot be tolerated - not in one case, or a thousand, or a million."

"If their efficacy becomes the measure of abhorrent acts, all sorts of unspeakable crimes somehow become acceptable."

"I may have found myself on the wrong side of the government on torture. But I'm on the right side of history."

"There are things we should not do, even in the name of national security. One of them, I now firmly believe, is torture."

More on Kiriakou below. He's Obama's latest whistleblower victim. His Justice Department wages war on them more aggressively than all previous administrations combined.

"We need to empower federal employees as watchdogs of wrongdoing and partners in performance. (I'll) strengthen whistleblower laws to protect federal workers who expose waste, fraud, and abuse of authority in government."

He said one thing. He did another. As president, he usurped diktat powers. He wages war on truth. He targets whistleblowers. He prioritizes surveillance powers.

In his book "Necessary Secrets," Gabriel Schoenfeld said he "presided over the most draconian crackdown on leaks in our history - even more so than Nixon."

Rhetorically he supports civil liberties and transparency. "Such acts of courage and patriotism….should be encouraged rather than stifled," he said.

At the same time, he betrayed the public trust. He targets free expression and dissent. He pursues police state prosecutions and intimidation.

He claims Justice Department immunity from illegal spying suits. He exceeds the worst of all previous administrations.

"We are witnessing the bipartisan normalization and legitimation of a national surveillance state." Obama exceeded the worst of George Bush.

Bradley Manning's persecution is well known. So is targeting Julian Assange. Others get little or less coverage.

James Risen was targeted for his book titled "State of War: The Secret History of the CIA and the Bush Administration."

He refused to disclose his sources. Obama officials alleged Sterling. He was indicted under Espionage Act of 1917 provisions. Transparency is verboten. Secrecy is official policy. Truth-telling is criminalized.

According to Reporters Committee for Freedom executive director Lucy Dalglish:

"The message they are sending to everyone is 'You leak to the media, we will get you.' "

"As far as I can tell, there is absolutely no difference (between Bush and Obama), and (he) seems to be paying more attention to it. This is going to get nasty."

"It's shocking. It's really shocking," she added. "What the hell do they think we are, puppets? They're supposed to stay out of our business. They are the public servants. We pay them."

He was indicted on multiple charges of "willful retention of classified information, obstruction of justice and making false statements."

She called the scheme "the biggest boondoggle going on (at the time) in the intelligence community." She said people have a right to know.

He said profiteers are incentivized to hype fears. Doing so benefits their bottom line priorities. Justice Department prosecutors tried to prosecute him. They failed. Charges were dropped. Others aren't as lucky.

Drake, Sterling, Risen, and others like them are heroic. They're some of America's best. They prioritize doing the right thing. They know the risks and take them. They're punished for acting responsibly. Police states operate that way.

In January 2012, he was initially charged with a criminal complaint. Subsequent counts included violating Espionage Act provisions "for allegedly illegally disclosing national defense information to individuals not authorized to receive it."

In December 2007, he went public. His book titled "Reluctant Spy: My Secret Life in the CIA's War on Terror" revealed Agency wrongdoing.

He said Zubaydah was waterboarded 83 times in one month. Doing so is torture, he stressed. He helped expose abusive Agency practices. Official policy prioritizes them.

They're in good company.

They're sought and/or accepted for lesser sentences. Innocent victims take them to avoid harsher treatment.

Kariakou pled guilty to one count of violating the Intelligence Identities Protection Act. Other Espionage Act charges were dropped.

Before sentencing, US District Court Judge Leone Brinkema asked if he had anything to say. He declined. Brinkema added that "Perhaps you have already spoken too much."

Separately, Kiriakou thanked supporters. He came "out of court positive, confident and optimistic," he said.

"I'm headed to prison while the torturers and the lawyers who papered over it and the people who conceived it and the man who destroyed the proof of it, the tapes, will never face justice."

"And that's the saddest part of the story," he added. Unconscionable crimes reflect official policy. Police states operate that way.

Obama heads the worst of rogue governance. Humanity may not survive another four years.