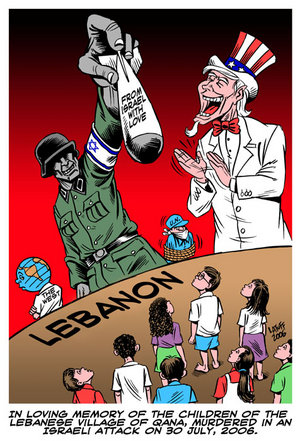 Washington's War of Aggression on Syria

Israel partners with Washington's wars. It's been largely covertly involved against Syria. It's now blatantly overt.

On Wednesday, they bombed a scientific research center near Damascus. These actions and similar ones are naked acts of aggression. A follow-up article will discuss this further.

"And what about the real sources of terrorists - US allies in the region like Egypt, Pakistan, and Saudi Arabia?"

"Wasn't it repressive policies of the first, and the corruption and poverty of the second, that were generating many of the angry young men who became terrorists?"

"And what of the radical ideology and direct funding spewing from Saudi Arabia?"

"It seemed that we were being taken into a strategy more likely to make us the enemy - encouraging what could look like a 'clash of civilizations' - not a good strategy for winning the war on terror."

For nearly two years, Syria's been on the boil. Conflict shows no signs of ending. Washington's dirty hands prevent it.

"Al Jazeera quoted a" Free Syrian Army commander. He pointed fingers the wrong way. He claimed victims were "executed by the regime."

They continue to be found. Final death toll numbers may approach or exceed 120. "Rebel groups blamed the Syrian government for the killings, suggesting that some of the victims had crossed into 'loyalist' areas then disappeared."

None had ID cards. Extrajudicial killings are commonplace. Tuesday's death toll may be unprecedented. Atrocities accompany them. Assad loyalists are targeted.

The Syrian Free Press headlined "New Massacre of civilians by the hand of terrorist Militia mercenaries, passed of as being done by Syrian Arab army."

Dozens of bodies were found along the Quwayq River. Civilians killed were family members held hostage by terrorists. They were "human shields" until no longer needed.

They were executed in cold blood. Women and children were murdered like men. Gunshots to the head killed them. Bodies were found hands tied and mutilated.

Bodies of men, women, and boys were found in the Quweiq River. It's in Aleppo's southwest. Death squad militants control the area.

On January 29, Friends of Syria.com headlined "Update on the Bodies in the River," saying:

Jabhat al-Nusra "carried out a mass execution against tens of abducted persons, throwing their bodies in Quweig River at Bustan al-Qasr area in Aleppo."

Families "identified a number of the killed, stressing that Jabhat al-Nusra abducted them because of their (refusal) to cooperate with this terrorist group."

SANA's reporter said no Syrian army forces were present in the area.

Syrian authorities earlier erected barbed wire along the river. It was done to prevent terrorist infiltration. It didn't help.

"The bodies, which terrorists and TV misleading channels have claimed that the army killed their owners, were found in the side where terrorists present…if they were killed in the safe areas, their bodies would stick to the barbed wires before reaching the region where they were discovered."

Whether on not Washington plans direct intervention remains to be seen. Last weekend, Obama said:

"In a situation like Syria, I have to ask, can we make a difference in that situation? Would a military intervention have an impact?"

"How would it affect our ability to support troops who are still in Afghanistan? What would be the aftermath of our involvement on the ground?"

"Could it trigger even worse violence or the use of chemical weapons? What offers the best prospect of a stable post-Assad regime?"

A Washington Post editorial responded. It headlined "Consequences of US inaction in Syria are clear," saying:

"The logic at work here - the longer the Assad regime holds on, the worse the consequences - was acknowledged by senior Obama administration officials nearly a year ago."

At his confirmation hearing, John Kerry said "Every day that goes by, it gets worse." According to French Foreign Minister Laurent Fabius:

"If we don't give the means to the Syrian people to go achieve their freedom, there is a risk….that massacres and antagonisms amplify, and that extremism and terrorism prevail."

Obama so far stopped short of direct intervention. "In the absence of US action, the violence (increases) and the Assad regime move(s) dangerously close to using chemical arms."

Russia also for supporting a government Washington wants toppled. False flags are an American tradition. Their origins go back generations.

They're Big Lies. Merrian-Webster calls them "deliberate gross distortion(s) of the truth used especially as a propaganda tactic."

Wikipedia says they're "cover operations designed to deceive the public in such a way that the operations appear as though they are being carried out by other entities."

The Post says he can "do much to shape the course of events in Syria without using American troops….Continued passivity (ensures greater crisis) along with the consequences for the United States."

According to Post columnist David Ignatius, Syria's becoming a "failed state." He urges "replac(ing)" Assad to prevent it. In earlier columns, he argued for direct intervention.

He has longstanding US intelligence ties. He uses illegitimate Free Syrian Army elements as sources. He calls Assad's government a "repressive police state."

He said Washington so far made only "a halfhearted attempt" to replace him. His solution is "moderate military force." His bottom line is toppling Assad.

He's mindless of rule of law principles. He's unconcerned about potential post-conflict consequences. He ignores Washington's direct role. So do other media scoundrels.

On January 29, Patrick Seale headined "A Peace Package for the Middle East." He discussed regional destabilization. Events are inter-connected, he said.

The entire region's volatile. It's on the boil. Iran's fate is "closely linked to Syria."

Assad has been one of "the most ardent champion(s) of Palestinian rights and of Lebanon's freedom from Israeli control."

The "so-called 'resistance axis' of Iran, Syria and Lebanon's Hizbollah has sought to deter or contain Israeli attacks while challenging US-Israeli hegemony in the Levant."

Attempts to resolve Middle East conflicts separately failed. "The obvious solution (may be dealing with them) as a package." Failure lets them fester.

"What about Syria," asked Seale. "It lies at the very heart of the regional power system." Its conflict threatens neighbors. Israel isn't immune. Militants can strike anywhere.

It's "abundantly clear that there is no military solution to the conflict." Neither side can win outright. Fighting could continue for years. Solutions are illusive. Conflict wounds are deep.

For Syria's sake, its neighbors and the region, "a supreme effort must be made to prevent the collapse of" its state into possible fragmentation.

Washington-led NATO is systematically destroying Syria. In the 1990s, dismantling the Balkans was prioritized. Post-9/11, Afghanistan, Iraq and Libya were ravaged. Much more lies ahead.

They include multiple rounds of sanctions. Doing so "paralyz(es) trade and investment. Acts of deliberate sabotage and piracy (target) the country's industrial base."

Turkey and other NATO allies are involved. Syria's "industrial enterprises (are) clos(ed) down and/or bankrupt(ed)." More than half the country's industrial base is affected.

Agriculture is undermined. Food shortages are serious. So are "undernourishment and child malnutrition."

Obama bears full responsibility. He's waged war on humanity for four years. He's ravaged one country after another. He plans lots more ahead. It remains to be seen what follows.