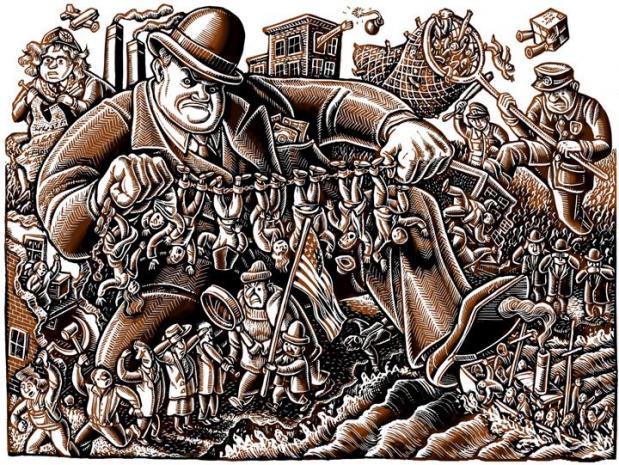 They "agreed on a set of principles for a sweeping overhaul of the immigration system, including a pathway to American citizenship for 11 million (undocumented) immigrants that would hinge on progress in securing the borders and ensuring that foreigners leave the country when their visas expire."

According to CNN, Obama's "ready to double down on immigration reform." He broke earlier promises made. He failed to deliver. "(H)e made it a top legislative priority" in term two.

Expect no more now than earlier. More on that below.

What they mean matters more. What they'll do matters most. According to The Times:

"Eight senators, four from each party" released a January 28 memo. A "statement of principles" was explained. They call for "more border and workplace enforcement, more visas for needed workers and legalization - with a path to citizenship…."

Omitted details and deliberate vagueness assure disappointment. "What's encouraging is that (anything) exists at all." No plan is better than a bad one.

Nothing positive occurred for years. Expect nothing now. According to TimesSpeak, "no longer does the immigration debate consist of two groups yelling across a void."

Republicans and Democrats proposed "pragmatic" solutions "most Americans accept. The citizenship path….won't be easy or short."

They also have to learn English and prove they're employed. They'll be subject to mandatory employer E-Verify. It's a government-run online system. It enforces draconian harshness.

Undocumented immigrants will be forced to the back of the line. US citizens trying to bring unmarried Mexican children to America requires waiting 17 years or longer. Most never succeed.

Proposed legislation blocks the road to citizenship until borders are secured. So-called disqualifying crimes are largely minor misdemeanors or youthful indiscretions. They're enough to deny citizenship.

They ignore sweeping Immigration and Customs Enforcement (ICE) discriminatory harshness. Post-9/11, hundreds of thousands of immigrants have been mercilessly hounded, harassed, and persecuted.

Sweeping workplace and community raids target them. They've been rounded up, incarcerated, brutally treated, denied all rights, and sent home for being the wrong color from the wrong country.

One-quarter or more deported are parents of children born in America. They're US citizens. It doesn't matter. They can stay. Parents can't. Policy separates families trying to stay together.

Claiming "immigration reform finally began" turns truth on its head. Expect no better now than earlier. Even The Times admits it's "easy to be skeptical."

Immigrants never were treated fairly. The 1952 Immigration and Nationality Act grudgingly went further than previous laws. It made immigrants of all races eligible for citizenship based on strict quotas.

Due process and judicial fairness were ignored. Immigration and Naturalization Service (INS) agents were empowered to detain legal immigrants without bond, deport them without discretionary relief, restrict their right to counsel, bar judicial appeals, and use misdemeanors or youthful indiscretions be reasons for deportation.

They come to America because NAFTA and other exploitive trade agreements destroyed their ability to earn a living at home. Come north or perish. Millions have no choice.

ICE heads them off at the border. Gloves off policy targets them ruthlessly. Wanting to live free and survive is criminalized. Poor, desperate people are called dangerous.

Indentured servitude was policy. Immigrants became serfs with no rights. Employers were empowered to exploit them. They got temporary low wage jobs.

They were cheated out of pay. Employers seized their documents. They were held in virtual captivity. They were denied vital medical care or benefits for injuries received.

A cycle of abuse punished them. They couldn't resist or complain. As undocumented workers, they had no rights. They were sent home when no longer needed.

Since 2004, Border Patrol staff doubled. Numbers are ninefold greater than 30 years ago. Plans call for increasing their numbers. Untold billions more will be spent. Efforts will be as futile as earlier.

Greater militarization of Mexico's border is planned. So are harsher crackdowns. Drone surveillance is proposed. A commission of governors, state attorneys general and community leaders will decide if policies succeed.

Senators say they'll monitor "progress of securing our border and make a recommendation regarding when the bill's security measures outlined….are completed."

It could take years. Immigrants who come forth voluntarily will get "probationary status." It's ill-defined. They'll have no rights. They'll be at the mercy of federal and local authorities, as well as exploitive employers.

They can be deported on a whim. They'll have no right of appeal. They'll be separated from family members. Parents and children will be split.

The path to citizenship requires millions of undocumented immigrants to wait 11 years or longer. Many or most perhaps won't qualify.

"Comprehensive immigration reform" is a figure of speech. Reality suggests otherwise. Previous Bush and Obama initiatives failed. They were aborted.

Immigrant rights aren't prioritized. They're exploited and abused. They're not wanted. Most come from Mexico and Central America. At best, they can expect Bracero Program 2.0.

They'll be exploited, persecuted, denied all rights, underpaid, and hung out to dry when not wanted. America's race to the bottom assures it. Planned immigration reform assures none at all. It's the American way.

On Tuesday, Obama addressed immigration reform. His comments were long on what he does best - doublespeak duplicity, promises made to be broken, and disdain for society's least advantaged.

His scheme largely mirrors what eight senators proposed. It's long on draconian inequity and short on long denied solutions.

The Immigrant Solidarity Networks says "We are all humans (and) no one is illegal." It's long past time legal and undocumented immigrants were treated that way.