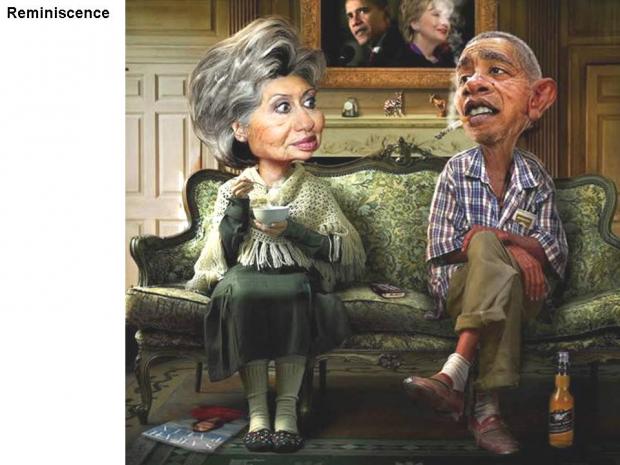 From 2001 - 2009, she was US Senator from New York. In 2008, she challenged Obama for the Democrat party's presidential nomination.

Supporters urge her to run again in 2016. She's noncommittal. When asked, she says "I am not thinking about anything like that right now."

She also said she'll "do everything (she) can to make sure that women compete at the highest levels, not only in the United States but around the world."

Husband Bill urges her to run. Some suspect she already made her move.

With or without her support, a "Ready for Hillary" political action committee was formed. It's raising money for 2016. Campaigning never ends. America's electoral season is seamless.

Hillary for 2016 T-shirts are on sale. Friends of Hillary Facebook send regular messages. When launching her 2008 campaign, she said "I'm in to win." Insiders say she hasn't changed her mind. In 2016, she'll be 69.

In December, she scored high in public approval. A Washington Post/ABC News poll showed 57% of Americans support her presidential ambitions. Over 80% of Democrats back her candidacy.

Two-thirds of US women do. Two-thirds of Americans give her high marks as America's top diplomat. She scored higher than any previous Secretary of State in 20 years of polling.

In four years, she visited 112 countries. She traveled nearly a million miles. She self-promoted everywhere. She has larger than life ambitions.

She's gone from State. She's very much still involved. The New York Times profiled her. She's "at the peak of her influence," it said. She's "an instant presidential front-runner."

She's got lots of time to pursue her goal. "We need a new architecture for this new world," she says.

Obama exceeded the worst of George Bush. Clinton joined his war cabinet. She's ideologically hardline. She was a Wellesley College Goldwater Girl. She was president of Wellesley's Young Republicans.

She's militantly pro-war. In the 1990s, she was very much part of husband Bill's foreign policy team. As an aggressive first lady, she had lots of influence.

She was influential in getting Madeleine Albright appointed Secretary of State in 1997. They consulted with each other often.

In her memoirs, Albright described their relationship as an "unprecedented partnership."

"I was once asked whether it was appropriate for the two of us to work together so closely," she added. "I agreed that it was a departure from tradition."

At Secretary of State, Clinton headed foreign policy. She's complicit in crimes of war and against humanity. She represents the worst of imperial arrogance. She a reliable spear-carrier.

Her outbursts reflect bullying and bluster, not diplomacy. She's contemptuous of rule of law principles. She scorns democracy. She's committed to war, not peace.

She's unabashedly hawkish. As first lady, she urged husband Bill to bomb Belgrade in 1999. She ignored international and constitutional law. She lied about Slobodan Milosevic.

"You cannot let this go on at the end of a century that has seen the major holocaust of our time," she said. "What do we have NATO for if not to defend our way of life?"

For 78 days, NATO ravaged Yugoslavia. Nearly everything targeted was struck. Massive destruction and disruption followed. An estimated $100 billion in damage was inflicted. A humanitarian disaster resulted. Environmental contamination was extensive.

Nobel laureate Harold Pinter called NATO's aggression "barbaric (and despicable), another blatant and brutal assertion of US power using NATO as its missile (to consolidate) American domination of Europe."

Lawless aggression became humanitarian intervention. An avenue to Eurasia was opened. A permanent US military presence was established. American imperialism claimed another trophy.

She said any nation lending Al Qaeda "aid and comfort will now face the wrath of our country. I'll stand behind Bush for a long time to come."

She supported annual defense (aka war) budgets. She voted for the Patriot Act and other police state legislation. She endorsed cluster bomb use in civilian areas and refugee camps.

In 2005, she was one of only six Democrat senators opposed to blocking deployment of untested missile defense systems. They're first-strike offensive weapons.

She supported restriction-free nuclear cooperation with Israel and other US allies violating NPT provisions. She endorsed nuclear weapons use in Afghanistan and Pakistan. She calls them deterrents that "keep the peace."

She was one of the largest recipients of defense contractor cash. She backed war on Afghanistan and Iraq. She opposed a Democrat resolution. It would have required Bush to try diplomacy before launching war in 2003.

Her 2002 Senate speech supported war. She lied. She said "intelligence reports show that Saddam Hussein rebuilt his chemical and biological weapons stock, his missile delivery capability, and his nuclear program."

"He has given aid, comfort, and sanctuary to terrorists, including Al Qaeda members….It is clear that if left unchecked, (he'll) continue to increase his capacity to wage biological and chemical warfare, and will keep trying to develop nuclear weapons."

"Should he succeed in that endeavor, he could alter the political and security landscape of the Middle East, which as we know all too well affects American security."

"Now this much is undisputed." What's undisputed were her bald-faced lies. She repeated them ad nauseam as Secretary of State.

She supports the worst of Israeli lawlessness. At AIPAC's 2008 convention, she said:

"The United States stands with Israel now and forever."

We have shared interests....shared ideals....common values. I have a bedrock commitment to Israel's security."

(Against Islamic extremists), our two nations are fighting a shared threat."

"I strongly support Israel's right to self-defense (and) believe America should aid in that defense."

"I am committed to making sure that Israel maintains a military edge to meet increasing threats."

The only threats Israel faces are ones it invents.

"I am deeply concerned about the growing threat in Gaza (and) Hamas' campaign of terror."

She lied saying its charter "calls for the destruction of Israel."

She lied a third time, saying "I support calling the Iranian Revolutionary Guard what it is: a terrorist organization. It is imperative that we get both tough and smart about dealing with Iran before it is too late."

"I want the Iranians to know that if I'm president, we will attack Iran. In the next 10 years, during which they might foolishly consider launching an attack on Israel, we would be able to totally obliterate them."

In other words, she threatened to murder 75 million people. Today it's nearly 80 million. She's extremist on all foreign policy issues. She favors police state harshness domestically.

She represents the worst of America's dark side. She's a war criminal multiple times over. She's arguably America's most shameless ever secretary of state.

She's clearly the most brazen. Her language and attitude exceed the worst Cold War rhetoric.

Her take-no-prisoners thinking, character, and demagoguery tell all. She's addicted to self-aggrandizement and diktat authority.

She's indifferent to human suffering. She's a monument to wrong over right. She's a disgrace and embarrassment to her country, position and humanity.

She may become America's 45th president. Perhaps she won't get a chance to try. Humanity may not survives its 44th. The fullness of time will tell.