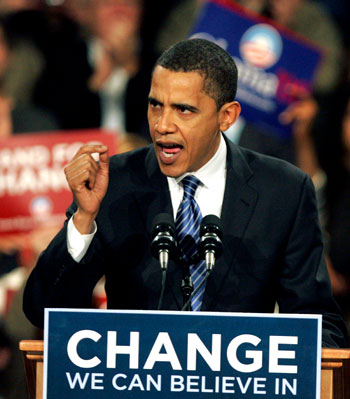 Seasonal adjustments turn reality on its head. So does the so-called "birth-death model." It estimates net non-reported jobs from new businesses minus losses from others no longer operating.

"The confidence level for the monthly change in total employment is on the order of plus or minus 430,000 jobs."

Claiming economic conditions are sound when real unemployment is 23% is one of the worst damn lies. Bipartisan complicity to destroy America's social contract when it's most needed shows total disregard for vital needs.

Each fall and winter well above trend job gains are reported. Every spring and summer, they're reversed and then some. Hundreds of thousands of previously reported jobs vanish.

They never existed in the first place. Phantom numbers replace real ones. Official ones are statistical illusions. Obama is more jobs destroyer than creator.

He asked how can growth be sound when 212,000 part-time jobs replaced full-time ones for "economic reasons."

"And the broadest measure of unemployment remains stuck at a depression-like 14.4%." For the past four years, long-term unemployment practically doubled to nearly five million.

I'll take years to undo the damage. It'll never be undone if destructive policies substitute for constructive ones.

People dropped out because of no jobs. Doing so makes them non-persons. They don't exist. They're not counted.

Labor force numbers have been contracting since 2006. In Obama's first term, they were "more than three times greater than" the increase in "not in labor force" Americans throughout the 1980s.

Hundreds of thousands of new jobless workers belie headline numbers. In 2007, over 146 million Americans were employed. Today it's 141.6 million despite annual population growth.

When government and media scoundrels say recovery's proceeding on course and "unemployment is lower than" two years ago, they're lying.

Doing so reveals economic weakness, not strength. Nothing ahead looks promising. How can it with destructive policies substituting for stimulative ones.

In January, nearly 90 million aged-16 or older Americans aren't in the labor force. In four years under Obama, the total increased over eight million.

Over 40% of workers earn $20,000 annually or less. Over double that amount in urban America is needed to support family members. In many major cities, it's much more.

Households live from paycheck to paycheck. They're unprepared if trouble arrives. Euphoric markets pay no attention. They're approaching record highs.

How much they won't say. In America, estimates range up to $23 trillion. Piling on did nothing to resolve crisis conditions. Currencies have been debased. Future inflation issues are raised.

Last fall, the Bundesbank fired a warning shot. It wants its Fed-held gold reserves audited. Germany wants part of them repatriated. Doing so could prompt a chain reaction.

At issue is lack of trust. Things aren't as rosy as portrayed. Deep-seated trouble lurks sub-surface. Recovery is built on a house of cards. Shocks can crater it when least expected. Economic warfare could trigger it.