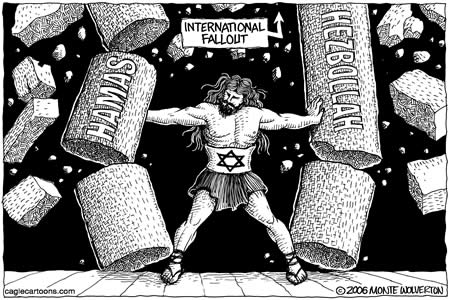 Israel and America are longstanding imperial partners. Washington OK's naked aggression on Syria. Doing so declared war. Admitting it may or may not follow later.

Lebanon's Future TV said an "Israeli aircraft might have detonated an electronic transmission device. Hizbollah cordoned off the area."

Lebanon's NNA news agency said "Israeli aircraft did not leave Lebanese airspace over the South all through the day."

Lebanon's Foreign Minister Adnan Mansour said "Israeli jets continue to invade Lebanon's airspace every day. We must stand up against the Israeli attacks but not just with calls, statements and condemnation."

Overflying another country's airspace without permission violates international law. Israel does it regularly. Lebanon is violated multiple times daily. Doing so is longstanding.

Tyre is in southern Lebanon. It's about 12 miles from Israel's border. Lebanese media accused Israel of striking.

Mossad-connected DEBKAfile said Israel's air force maintains a "round-the-clock blanket over the (Syrian/Lebanese) border area. It is constantly monitoring the traffic moving across and is ready to prevent any arms traffic."

It imposed its own "no-fly" zone and buffer area. Make no mistake. Washington OK'd doing it. It violates international law. More attacks may be forthcoming. Greater conflict may follow. Lebanon may be involved. Anything ahead is possible.

"A 10-mile strip filled with troops and tanks is being considered to fend off Islamists should Assad fall."

"We've presented the prime minister with a comprehensive plan to defend Israel's border after, or perhaps before, the fall of Assad's regime."

"A buffer zone set up with the co-operation of local villagers lies at the heart of the plan. If the country remains unstable we might have to stay there for years."

Israel's currently building a security barrier along its Syrian border. It extends from Mount Avital south to where Israeli, Syrian and Jordanian borders meet in southern Golan.

Transforming the entire region is planned. Pre-2003 Iraq no longer exists. Nor does Gaddafi's Libya. Israel and Washington are imperial partners. They want unchallenged regional dominance.

Strategy involves multiple wars. One segues to another. Others occur simultaneously. Permanent conflicts are planned. Peace and stability are anathema. Israel and Washington are jointly involved. So are key NATO partners and regional allies.

Threats are invented to justify policy. Netanyahu claims Israel is surrounded by hostile enemies. It needs to defend its borders from "terrorist elements." It's "prepar(ing) for any eventuality that could develop."

At the same time, West Bank crackdowns continue. Multiple ones are ongoing. East Jerusalemites are targeted. Collective punishment terrorizes them.

Security forces admit harassment. All Palestinians are vulnerable. They're unsafe anywhere. They're terrorized unjustly. Young children are treated like adults.

Throughout the West Bank, peaceful demonstrations are attacked. On Sunday, a Burin village encampment was demolished. It was on privately owned Palestinian land.

Residents erected it Saturday. They had every right to do so. Israeli security forces targeted them. They declared Palestinian land a closed military zone. Doing so has no legitimacy.

Entire Palestinian communities are being uprooted. Three main areas are targeted. They include Mount Hebron, the Khan al-Ahmar region, and northern Jordan Valley.

Palestinians are dispossessed. They have no say. Land belonging to them for generations is stolen. Jewish development is prioritized. Communities struggling to survive are disappearing. Might over right denies what's rightfully theirs.

Cleansing the Jordan Valley is longstanding. It includes some of Palestine's most fertile land. It's being stolen dunum by dunum. The entire area reflects a patchwork of remaining zones in which Palestinians remain.

Residents are impoverished. Basic infrastructure is lacking. Oslo stole 90% of Jordan Valley land. Half of what remained is gone. Israel maintains full civil and military control.

Doing so is "cruel and inhuman." It "stands in opposition to every democratic and civilized privilege." It "proves that (Netanyahu's) call to….renew peace negotiations is nothing but a ploy."

Thirteen other Hamas officials were arrested. Over two dozen in all were seized from Hebron, Ramallah, Nablus, Qalqilyah, Tulkarkem, and Bethlehem.

A Hamas-affiliated web site said soldiers burst into homes with dogs. Arrests followed. Watch for much worse ahead.

On Saturday, Netanyahu explained priorities going forward. Syria is targeted. So is Iran.

"We have many tasks to deal with, but first of all in the Middle East we must maintain security," he said.

"The first task of the next government I form is to stop Iran from obtaining nuclear weapons."

He never once mention peace while campaigning. He now urges Abbas to resume negotiating.

He "call(ed) on all sectors and parties to join me in a national unity government that is as broad as possible."

He's up to no good. He's got belligerence on his mind. He's overtly involved in Syria's conflict. He's again targeting Iran.

Urging peace talks turns reality on its head. Daily viciousness targets Palestinians. Their rights are systematically violated. They have none.

Actions speak louder than words. Palestinians never had a peace partner and don't now. Their liberating struggle continues. Where it ends who knows.

1 Comments in Response to Does Netanyahu Want Regional War?

[[Urging peace talks turns reality on its head. Daily viciousness targets Palestinians. Their rights are systematically violated. They have none.

Actions speak louder than words. Palestinians never had a peace partner and don't now. Their liberating struggle continues. Where it ends who knows.]]

Duh, there are no Palestinians. They're a fake people made up by the MUSLIMS to use in their JIHAD against the JEWISH STATE OF ISRAEL. When they finally get off their act and LEAVE POOR OUTNUMBERED SURROUNDED ISRAEL ALONE there's plenty of millions of square miles of room in the real Arab Umma for them to resettle in.

Does Netanyahu want a regional war? Good move, Lendman, making it a question instead of a statement. The answer however is no, it's the !?*! Muslims all around the region who want a war with Israel, or more precisely, already declared jihad in 1948 and will never call it off. Lendman's b.s. is jihad by other means, I wonder how much Saudi grease money this article brought him.

The real Arabs will never accept Israel, even the ones allowed to become part of Israel's democracy who got elected to the Knesset:

Here's a blog Lendman will probably never look at: