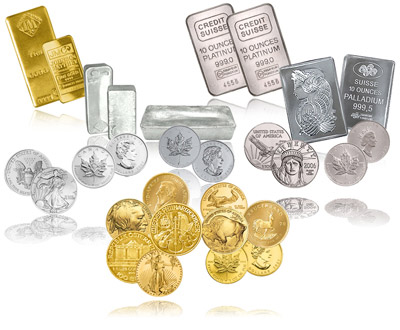 Florida Avenue is the main drag in our little town in central Florida. In less than a mile, you're likely to see three or four folks standing on the sidewalk wearing headphones, bopping to music, and waving big glittery signs or arrows with "We Buy Gold" written across them. It's a common sight across many cities today.

During my annual trip to Arizona, my friend Phil asked me about gold. He owns some gold with no emotional value tied to it, and I convinced him of two things. First, he should not sell his gold; and second, he should hold it in a portable form with an easily recognizable value, like Gold Eagles. If things really get tough, he wouldn't want to have to barter jewelry with no easily agreed-upon value.

There are many places where he could probably sell his jewelry, but how would he know if he was getting a fair price? I didn't know either, but I knew I had a friend who would.

I called up my good friend Rob. His family has owned a pawnshop for decades; it even has a "We Buy Gold" sign in the window. Who better to ask?

Rob explained his position as a dealer. For him, gold is a highly volatile asset; its price swings can have a major impact on his margins. When he buys gold, he must hold it – sometimes for several months – until he has enough to sell to a refinery. His highest percentage payout at the refinery is tied to the volume he sells.

Under Florida law, even if he buys the gold outright, as opposed to taking a pawn, he's required to hold the item for at least 30 days. The normal "We Buy Gold" facilities have a 15-day minimum hold.

When the price of gold is rising, a lot of folks come into his store to sell. When it drops, Rob can get caught with inventory he can't sell at a profit. The dealer does take a sizeable risk.

Rob walked me through the process his clerks use to evaluate gold, using a necklace as an example.

First they put the item on a scale to weigh it. Most dealers weigh the item in "pennyweight," not ounces. One pennyweight is 1/20 of a Troy ounce.

I asked Rob, "If I weighed a gold necklace on my wife's Weight Watcher's scale and it weighed 1 oz., that's 20 pennyweight on your scale, right?"

He replied, "Not exactly."

A Troy ounce is not the same unit of measurement as the "ounce" on a postal scale or the scale you weigh yourself on at home. When you see the price of gold quoted in the paper, it's in Troy ounces.

He also mentioned that some dealers weigh the gold in grams. There are 31.1 grams in a Troy ounce. (I'm using pennyweight in our example because that's what Rob uses in his store.)

The second step is to determine the karat weight (abbreviated "K") of the gold. "Karat" is the term used for purity; 24K gold is 99% pure.

Commercially made jewelry will always have a karat marking on it. If there's no marking, it's a huge red flag, and most dealers won't buy it.

A dealer will still verify that the karat marking on the gold is accurate. There are several styles of test kits that dealers use; Rob noted that karat markings are usually accurate, but not always.

Some inaccurate markings are actually there to deceive you. For example, "14K Filled" or "14K HGE" (heavy gold electroplated) are both gold-plated designations. That's why they check.

After that, it's a matter of math. It's not especially complicated, but the terminology used by the jewelry industry can puzzle people.

To make this process even more straightforward, I – with Rob's help – put together two Gold Conversion Worksheets for our Money Forever readers. Both walk you through the process step by step.

That's Great, But How Much Money Will I Get?

On average, "We Buy Gold" dealers pay about 76% of the spot price to sellers for their gold.

As a dealer, Rob loses approximately 5% when he takes the gold to the refinery. Because the refiner actually melts down the gold, its appraisal is even more accurate than Rob's. When he weighs the gold in the store, there may be steel (not gold) springs, a little filler, or even some soap scum (remember we are talking about used jewelry) on the product; that all adds to its weight.

One pennyweight is 1/20 of an ounce, so it doesn't take much to register a little more weight on Rob's scale. When the refiner melts out the actual gold, it's usually about 5% less than what he calculated.

Rob emphasized that his weight estimates never quite match what's left after the gold's been melted down. The refiner never buys the gold at spot price; when you boil it down (pun intended), his margins are normally 10-12%... certainly not exorbitant.

When I asked Rob if he had any suggestions for our readers, he said to take one item and shop it around. He suggested using a heavy item; it will give you a more accurate reading of what the jeweler is paying per Troy ounce. Go to three or four places and get quotes, and you will likely get a variety of prices.

Also, always ask the dealer for the weight and the karat of your item. They will probably quote the weight in pennyweight, knowing full well that most folks cannot convert it to Troy ounces.

Write it down so you can easily compare dealers' offers. If a couple of dealers give you the same weight, and then one is different, ask them to recheck it; don't hesitate to mention that other dealers told you something else. If the jewelry has a karat mark and the dealer tells you it's inaccurate, ask why – and get a second opinion.

Today's market for gold buyers is more competitive than you might think. To learn what the competition is offering, dealers will periodically send a secret shopper around with a gold item to their competitors to ask for a bid, should they decide they want to sell it.

Some gold buyers are very aggressive. Rob mentioned one store where the appraiser stands behind a piece of thick plastic, like at a currency exchange, and the customers slide their gold through an opening.

In one instance, a lady went into a particular store to have her jewelry appraised; the clerk slid paperwork and cash back through the slot, and refused to return her jewelry. It took fifteen minutes of escalating demands before she was finally able to speak to a manager and get her jewelry back.

If you're shopping around, trust your instincts. If it doesn't feel right, don't do it! There are plenty of reputable places that will buy your item, so do business where you feel comfortable. Shopping around can easily net you a few hundred dollars more for your item.

I asked Rob about the firms where you mail in your gold, and they send you back the cash. Just like dealers in town, some are reputable, and some are not.

Many also charge a high "assay fee," which lowers your total return. From a practical standpoint, it's much more difficult to comparison shop and negotiate through the mail. So while it’s probably the most convenient way to sell your gold it’s likely you’ll get less for it. Like anything in life, if you’re doing less legwork on this then you’re going to get less of a pay off.

Selling Directly to a Refiner

I asked Jeff Clark, the editor of BIG GOLD, if he had any suggestions. He indicated that local gold markets vary throughout the country. Some markets lack competitive buyers, so shopping around is paramount.

He also pointed out that gold refiners do not negotiate. They take the metal, melt it down, and pay you accordingly.

Jeff pointed me toward two refiners, Dillon Gage and Precious Metal Recovery, and I phoned them both.

Dillon Gage has a $10,000 minimum order and requires a tax ID number. It pays out 99% of spot price, minus an assay fee for analyzing the gold.

Precious Metal Recovery pays 93%-96% depending on quantity, with no assay fee. If you ask, the company will also provide a coupon for a portion off the shipping for larger orders.

Just like with dealers, if you go directly to a refiner, it's still important to compare prices and shop around.