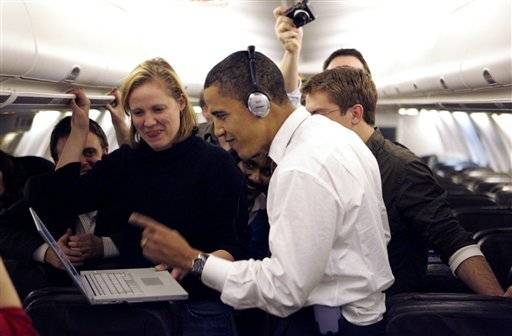 Throughout his tenure, Obama governed lawlessly for the monied interests that own him. He's waged no-holds-barred war on humanity.

In May 2009, Obama prioritized cybersecurity. He called cyber-threats "one of the most serious economic and national security challenges we face as a nation."

"America's economic prosperity in the 21st century will depend on cybersecurity."

He ordered a top-to-bottom review. A Cyberspace Policy Review report followed. He waged cyberwar on Iran. He did so cooperatively with Israel.

Israel was blamed. Washington was involved. Had the facility gone online infected, Iran's entire electrical power grid could have been shut down.

Targeted assassinations eliminate America's enemies. Lawless domestic spying is policy. So is warrantless wiretapping. Americans are as vulnerable as others.

Last fall, Defense Secretary Leon Panetta warned of a "cyber Pearl Harbor." It could "cause physical destruction and loss of life," he said. It could "paralyze and shock the nation and create a new profound sense of vulnerability."

US officials never lack for hyperbole. Fear-mongering is longstanding policy. So are Big Lies, false flags, and other pretexts for wars, other military actions, and disruptive ones.

US Cyber Command (USCYBERCOM) has full operational control. It's a cyber hit squad. It's part of the US Strategic Command.

It permits him "to order a preemptive strike if the United States detects (allegedly) credible evidence of a major digital attack looming from abroad."

The Washington Post said wireless and technology giants are battling over a plan to create super Wi-Fi networks.

The Christian Science Monitor said preemptive cyberwar entered America's arsenal. It "nugded up along side other" approved tactics and techniques.

The New York Times said they'll be able to "carry out searches of faraway computer networks for signs of potential attacks on the United States and, if the president approves, attack adversaries by injecting them with destructive code - even if there is no declared war."

Rules of engagement are classified. Effectively there are none. Cyber-warriors are freewheeling. They're unrestrained.

An unnamed US official said new cyberwar strategy is "far more aggressive than anything" used or recommended before. The gloves are off. Anything goes.

Major disruptions can occur without firing a shot. Military and/or civilian power grids can be crippled. So can financial systems and communications networks.

Another unnamed US official said cyberweapons are so powerful that "they should be unleashed only by" presidential order. Exceptions would be tactical strikes.

Examples include disabling command and control as well as ground radar ahead of conventional strikes. At the same time, most cyberoperations are presidential prerogatives.

Expect Obama to take full advantage. Extrajudicial operations are prioritized. Rule of law principles are spurned. Operational procedures have been in development for over two years.

They're headlined now. They coming out when cyberattacks more often target US companies and critical infrastructure. An unnamed US power station was crippled for weeks.

What constitutes "reasonable and proportionate force" resides in the eye of the aggressor. New guidelines exclude the Pentagon from defending US companies or individuals without presidential authority.

Doing so is Homeland Security's prerogative. The FBI has investigatory authority. Cybersecurity legislation remains stalled in Congress. Expect stepped up efforts for passage.

Doing so will more greatly comprise freedom. Full-blown tyranny approaches. It's a hair's breadth away. Whistleblowers are targeted. Dissent is endangered.

On February 3, a Washington Post editorial headlined "Cyberwar, out of the shadows," saying:

US Cyber Command is expanding exponentially. Doing so "is indicative of how conflict is moving toward center stage for the military, a domain similar to land, sea, air and outer space."

It's heading America toward unchallenged dominance.

In May 2000, the Pentagon's Joint Vision 2020 called for "full spectrum dominance" over all land, surface and sub-surface sea, air, space, electromagnetic spectrum and information systems with enough overwhelming power to fight and win global wars against any adversary.

Targeting cuts both ways. Incoming attacks can precede or follow US ones. Secrecy is prioritized but compromised. Spies have clever ways of doing it.

"If conflict in cyberspace is underway," said the Post, "then it is important to sustain support for the resources and decisions to fight it, and that will require more candor."

Expect little forthcoming from the most secretive administration in US history. Obama's first term prioritized homeland repression and lawless aggression. Imagine what he has in mind for term two.