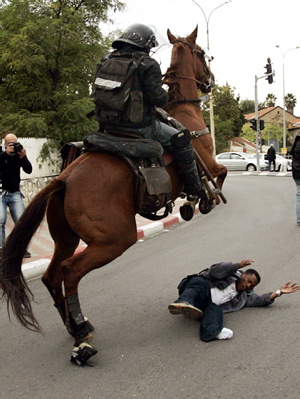 They have no rights. Peaceful demonstrators are attacked. In August 1967, Israel issued Military Order No. 101 ("Order Regarding Prohibition of Incitement and Hostile Propaganda Actions," as later amended).

Public or private political gatherings, assemblies, processions, or vigils of more than 10 Palestinians without permission are prohibited.

Any attempt to "influence public opinion….in a manner liable to harm public safety or public order" is considered lawless.

Publications "contain(ing) material with political significance" are banned. They include printed, photographed, recorded, filmed, online, or other materials.

Displaying national symbols is prohibited. Military commanders have full authority. They "may empower any soldier or police officer….to exercise his powers in accordance with this order."

"(A)ny soldier shall have the authority to use the force necessary" for enforcement.

Violators face up to 10 years imprisonment, a heavy fine, or both. Palestinians have no legal right to demonstrate, express views freely, or engage in nonviolent peaceful protests.

They prohibited Bil'in and Ni'lin demonstrations. With or without other orders, they apply throughout the West Bank and East Jerusalem. They called peaceful gatherings illegal.

B'Tselem addressed the issue. Its new report is titled "Crowd Control: Israel's Use of Crowd Control Weapons in the West Bank."

According to B'Tselem, "Israeli security forces make extensive use of crowd control means, even when demonstrations have been restricted to a populated area and are not permitted to leave its boundaries."

At times, lethal force is used. Young children are attacked like adults. Arrests follow. So do injuries and deaths. Palestinian lives, welfare and rights don't matter.

Tear gas is Israel's main weapon of choice. It's a chemical irritant. Grenades are used to disperse it. Eyes and respiratory systems are affected.

Splitting tear gas grenades are used. Some are 40mm-caliber canisters. Several types of launchers fire them. They can be used one at a time or in multiples up to six in quick succession.

Two types of rubber-coated bullets are used. Core metal is either rubber or plastic coated. Launchers mounted on rifles fire them.

Israel's Military Industries Ltd. manufactures them. Israel's Orr Commission investigated excessive force in October 2000. It was the beginning of the second Intifada.

It largely blamed Israeli security forces. It said Israel should "act to erase the stain of discrimination against Arab citizens in all its various forms and expression."

It prohibited rubber-coated bullets use inside Israel. Military commanders use them inside its borders and throughout the Territories with impunity.

It's a popular weapon of choice. It's powerful enough to cause serious injuries or death. Firing them at close range is especially harmful.

Skunk is a foul-smelling liquid. It's sprayed from truck-mounted water cannons. The odor is offensive enough to get demonstrators to back off.

"First, the wording of the open-fire and safety regulations is ambiguous, and in some cases the regulations cannot be properly followed."

"Second, when security forces in the field violate the regulations, even systematically, practically no action is taken to put an end to this wrongful conduct."

Tear gas grenades, rubber-coated bullets, and other weapons are fired "directly at demonstrators with the aim of hitting them." Other times they're used "carelessly." Doing so contravenes regulations.

Security forces fire weapons "at a closer range than" permitted. Doing so makes them potentially lethal.

Young children are targeted. Passersby are indiscriminately hit. Everyone nearby is endangered.

Live fire is used. B'Tselem documented its use "in circumstances that were not life-threatening."

Disproportionate force is policy. So is unaccountability. Security forces operate with impunity. Nothing too harsh is off limits. Rules, regulations, and international laws are systematically violated.

On December 10, the Palestinian Center for Human Rights (PCHR) headlined "Palestine to the ICC." It did so on Human Rights Day.

It commemorates the day General Assembly members adopted the Universal Declaration of Human Rights (UDHR) in 1948.

World leaders pledged to "complement the UN Charter with a road map to guarantee the rights of every individual everywhere." Fulfillment never followed promise. PCHR launched its own campaign.

It "aims to encourage the relevant stakeholders, namely the State of Palestine, the Prosecutor of the International Criminal Court and the international community, to fulfill their responsibilities in ensuring justice and redress for Palestinian victims on violations of international law."

Ten years after the ICC's creation, PCHR "demand(s) accountability for the countless Palestinian victims who have been denied access to justice for so long."

Rome Statute drafters recognized that "all people are united by common bonds, their cultures pieced together in a shared heritage."

Rights this important are universal. Article 2 of the Universal Declaration of Human Rights states "no distinction shall be made on the basis of the political, jurisdictional or international status of the country or territory to which a person belongs, whether it be independent, trust, non-self-governing or under any other limitation of sovereignty."

Sixty-four years later, countless millions await justice, "simply because of the political status of the land into which they are born."

Besieged Gazans are collectively punished. They're isolated and "forced into de-development." Relentless attacks target them. Civilians suffer most.

PCHR wants them held accountable. The ICC is a permanent tribunal. It was established to prosecute individuals for crimes too important to ignore.

"Palestine to the ICC….aims to encourage the relevant actors to fulfill their responsibility in ensuring that Palestine gains access to the ICC."

It should sign and ratify the Rome Treaty. It should "lodge a declaration with the Court's Registrar under Article 11(2) and 12(3) of the Statute."

Investigating Israeli crimes and accountability should follow. Justice has been denied far too long.