Dear Ernie,  there is a new bill board at 7th Ave and Bethany showing someone being led into a prison cell:  "Buy Guns for someone who isn't allowed to own one?  Go to prison for ten years"  wording to that effect.
- here's the lowdown on sponsorship of propaganda in the USA:  the three groups are "Don't Lie for the Other Guy"
"Nat'l Shooting Sports Assn"
"BATFE"        not kidding.
So there was a Ch. 3 news truck as I was pulling out of the station and I asked them if they'd noticed the billboard.   No - what of it, they wanted to know.  I asked them if they thought Eric Holder of HomelandSecurity and the head of the BATFE had read the law.  Quizical looks - Fast and Furious I said as traffic started to move.  They still didn't get it.
So I'm gonna call Ch 3 and rephrase the comment untill they understand.  I'll leave it up to you to do the internet thing - and maybe call Ch 3, too...
Not over yet... 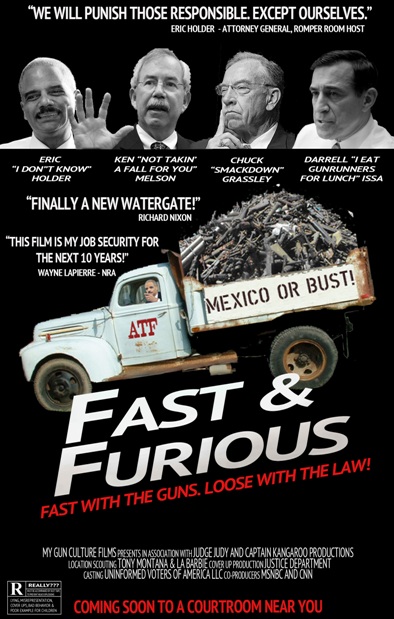 Oh Ernie - here's something I just sent Senator Flake.  With an introduction about how those who have and those who have not followed the Constitution are mentioned in history.  Yea, I separated the militia reference.

The Dick Act of 1902 also known as the Efficiency of Militia Bill H.R. 11654, of June 28, 1902 invalidates all so-called gun-control laws. It also divides the militia into three distinct and separate entities.
The three classes H.R. 11654 provides for are the organized militia, henceforth known as the National Guard of the State, Territory and District of Columbia, the unorganized militia and the regular army.
The militia encompasses every able-bodied male between the ages of 18 and 45. All members of the unorganized militia have the absolute personal right and 2nd Amendment right to keep and bear arms of any type, and as many as they can afford to buy.
The Dick Act of 1902 cannot be repealed; to do so would violate bills of attainder and ex post facto laws which would be yet another gross violation of the U.S. Constitution and the Bill of Rights. The President of the United States has zero authority without violating the Constitution to call the National Guard to serve outside of their State borders.
The National Guard Militia can only be required by the National Government for limited purposes specified in the Constitution (to uphold the laws of the Union; to suppress insurrection and repel invasion). These are the only purposes for which the General Government can call upon the National Guard.
Attorney General Wickersham advised President Taft, "the Organized Militia (the National Guard) can not be employed for offensive warfare outside the limits of the United States."
The Honorable William Gordon, in a speech to the House on Thursday, October 4, 1917, proved that the action of President Wilson in ordering the Organized Militia (the National Guard) to fight a war in Europe was so blatantly unconstitutional that he felt Wilson ought to have been impeached.
During the war with England an attempt was made by Congress to pass a bill authorizing the president to draft 100,000 men between the ages of 18 and 45 to invade enemy territory, Canada. The bill was defeated in the House by Daniel Webster on the precise point that Congress had no such power over the militia as to authorize it to empower the President to draft them into the regular army and send them out of the country.
The fact is that the President has no constitutional right, under any circumstances, to draft men from the militia to fight outside the borders of the USA, and not even beyond the borders of their respective states. Today, we have a constitutional LAW which still stands in waiting for the legislators to obey the Constitution which they swore an oath to uphold.
Charles Hughes of the American Bar Association (ABA) made a speech which is contained in the Appendix to Congressional Record, House, September 10, 1917, pages 6836-6840 which states: "The militia, within the meaning of these provisions of the Constitution is distinct from the Army of the United States." In these pages we also find a statement made by Daniel Webster, "that the great principle of the Constitution on that subject is that the militia is the militia of the States and of the General Government; and thus being the militia of the States, there is no part of the Constitution worded with greater care and with more scrupulous jealousy than that which grants and limits the power of Congress over it."
"This limitation upon the power to raise and support armies clearly establishes the intent and purpose of the framers of the Constitution to limit the power to raise and maintain a standing army to voluntary enlistment, because if the unlimited power to draft and conscript was intended to be conferred, it would have been a useless and puerile thing to limit the use of money for that purpose. Conscripted armies can be paid, but they are not required to be, and if it had been intended to confer the extraordinary power to draft the bodies of citizens and send them out of the country in direct conflict with the limitation upon the use of the militia imposed by the same section and article, certainly some restriction or limitation would have been imposed to restrain the unlimited use of such power."
The Honorable William Gordon
Congressional Record, House, Page 640 - 1917