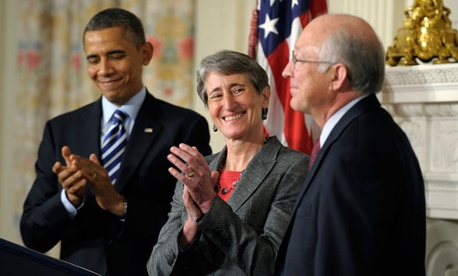 On February 6, Obama chose Jewell as new Interior Secretary. More on her below.

He and Obama share culpability. They back dangerous nuclear expansion. They're beholden to oil and gas interests. Drill, drill, drill is official policy. Lip service alone is paid to environmental concerns.

He voted against Gulf of Mexico drilling protections. He fought them as Interior Secretary.

He proved it throughout his tenure. Expect no change from Jewell. Suckling remains "guarded." She'll withhold judgment for later.

"America's public lands and endangered species are in dire need of visionary leadership," she said.

She hopes Jewell will reverse Salazar's damage. It's hard imagining how.

Her "challenge is whether she will value our wildlands and wildlife in the face of endless pressure by industry to drill for fossil fuels in areas within Interior's jurisdiction."

"Nature needs a true champion at this point in history." Obama has other priorities. Jewell was chosen to serve them. Expect no positive changes on her watch.

"Our public lands are not a publicly-traded commodity on Wall Street."

Former Interior Secretary Bruce Babbit called on Obama to set aside one acre for conservation permanently for each one devoted to oil and gas development.

"So far under Obama," he said, "industry has been winning the race as it obtains more and more land for oil and gas."

"Over the past four years, the industry has leased more than 6 million acres, compared with only 2.6 million acres permanently protected. In the Obama era, land conservation" got short shrift.

She's Recreational Equipment Inc. (REI) president and CEO. It sells outdoor gear and sporting goods. It does so through dozens of US retail outlets. Its sales approach $2 billion annually.

"Sally spent the majority of her career outside of Washington," said Obama. She's "an expert on the energy and climate issues that are going to shape our future."

Obama thanked Ken Salazar. He "cracked down on waste," he said. He claimed he improved Interior's management. He "ushered in a new era of conservation for our land, our water and our wildlife."

He spent four years wrecking them. He gave industry free reign. Expect no change from Jewell. She was chosen to serve industry interests. She won't disappoint.

They include waterways and the Ogallala Aquifer. It's one of the world's largest. In America, it supplies about 30% of the nation's irrigation ground water. It's also used for human consumption.

Friends of the Earth says Keystone XL "will carry one of the world's dirtiest fuels: tar sands oil."

Its route "could devastate ecosystems and pollute water sources, and would jeopardize public health."

No matter the stakes, Big Oil wants it. So do Republicans, many Democrats and Obama. Expect Jewell to support it. It's part of her mandate at Interior. She won't disappoint.

She was chosen not to. Her background shows why. It includes banking and Mobil Oil employment.

From 1992 - 1995, she was WestOne Bank president. From 1996 - 2000, she was Washington Mutual (WaMu) commercial banking group president. Before collapsing, it was the nation's largest mortgage lender.

It was one of the biggest option-ARM mortgage issuers. They let borrowers make unreasonably low payments. Doing so increases indebtedness exponentially. It compromises the ability to repay.

Senior bank executives knew all about fraudulent practices. Nothing was done internally to stop them. Bottom line priorities came first.

High-risk subprime loans were prioritized. They were securitized as toxic junk. They were sold to unwary buyers. Doing so was the bank's undoing. It profited hugely until its house of cards collapsed. Accountability never followed.

Environmentalists and conservationists express caution about Jewell. They have good reason to do so. She wasn't chosen to be a friend of the earth. Responsible stewardship's excluded from her mandate.

"We hope to see a better balance of productive development on non-park, non-wilderness public lands that enhances the wealth of America and creates jobs while protecting the environment" on her watch, he said.

Left unsaid is you can't have one with the other. Drill, drill, drill runs counter to good stewardship.

Bush administration Interior Secretary, Dirk Kempthorne, praised Jewell. He knew her from earlier consultations. "She was always someone I wanted there because she's a catalyst," he said.

She's "effective and time-tested on taking on a variety of issues, deciphering them, and determining what is the most important and making a decision."

Big Oil's in good hands with Jewell. Friends of the earth have good reasons for concern.