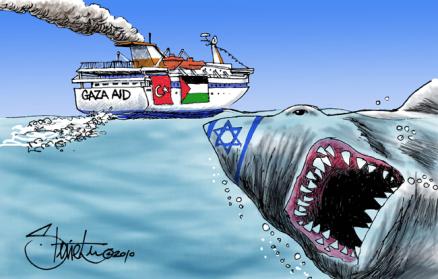 In May 2010, Israeli commandos committed premeditated murder. They killed nine humanitarian activists in cold blood. They did so in international waters. They were trying to bring vitally needed aid to besieged Gazans.

Israel wants them isolated. It wants them suffocated. Slow-motion genocide is longstanding policy.

A Human Rights Council investigation followed. It criticized Israel's "outrageous attack on aid ships attempting to breach a blockade on the Gaza Strip."

It called doing so "piracy, (an) act of aggression, (a) brutal massacre, (an) act of terrorism, (a) war crime, (a) crime against humanity, unprovoked....unwarranted....atrocious, (and) brutal."

It said onboard humanitarian activists were "peaceful, innocent, noble, unarmed, (and) defenseless."

Attacking them "was unnecessary, disproportionate, excessive, inappropriate and resulted in the wholly avoidable killing and maiming of a large number of civilian passengers."

"Israel made "a deliberate attempt....to suppress or destroy evidence." Its own version of events was fabricated. Fake videos and other falsified materials were used.

Crimes against humanity were committed. So was piracy. UN Secretary-General Ban Ki-moon shamelessly named his own commission.

Then Colombian President Alvaro Uribe was vice-chairman. His appalling human rights record should have disqualified him.

He bore direct responsibility for murdering thousands of trade unionists, campesinos, human rights workers, journalists, and others opposing Colombia's narco-terrorism and ties to US imperialism.

Truth was systematically suppressed. Mavi Marmara victims were denied. So are besieged Gazans.

"(T)here were no wrongdoings and no negligences in any fundamental areas during a complicated and complex operation."

"But on the other hand, there were mistakes that were made in decisions, including some taken at relatively high levels, which meant that the result was not as had been initially anticipated."

"(N)ot all possible intelligence gathering methods were fully implemented and (the) coordination between Navy Intelligence and the Israeli Defense Intelligence was insufficient."

"The anticipated level of violence used against the forces was underestimated."

"(Commandos) relied excessively on a single course of action." Others weren't planned in "the event of more dangerous scenarios."

"(A)s far as is currently known, no country in the world holds the ability to stop a vessel at sea in a non hostile manner."

"(A)lternative courses of action could have existed had the process of preparation begun enough time in advance…."

"(T)he use of live fire was justified and the entire operation is estimable."

The inquiry "noted with favor the various stages of medical evacuation of the injured by air and by sea, including the injured passengers of the Mavi Marmara."

Eiland added that "the issue should be viewed with perspective." Israel won't incur long-term damage.

"(T)here's a tendency to draw general conclusions (from) a single incident."

"(T)he fact that the IDF examines itself and others do not, results in that only the 'errors' of the IDF are publicized."

America, Britain, and other rogue Western nations self-examine. State crimes are suppressed. Coverup is policy. So is unaccountability.

It said Israel was "in compliance with (its unilaterally imposed) conditions for such a blockade."

False. Under the laws of armed conflict, "a blockade is illegal if:

(a) it has the sole purpose of starving the civilian population or denying it other objects essential for its survival; or

(b) the damage to the civilian population is, or may be expected to be, excessive in relation to the concrete and direct military advantage anticipated from the blockade."

Turkel commission members dismissed rule of law principles. They did so out of hand. They ignored clear evidence of criminality. Eye witnesses, forensic evidence, video footage, and other photographic material proved it.

It "concluded that a series of violations of international law, including international humanitarian and human rights law, were committed by the Israeli forces during the interception of the flotilla and during the detention of passengers in Israel prior to deportation."

"The preponderance of evidence from impeccable sources is far too overwhelming to come to a contrary opinion."

They whitewashed earlier criminality. It begs the question why they now recommend "dramatic changes in the way decisions are made about opening investigations of possible war crimes by IDF soldiers against Palestinians."

The decision on "whether to open a criminal investigation should not in any way be dependent on the results of operational investigations conducted by the army, contrary to the IDF's position on the matter."

Turkel's second report followed its first one. It reflects too little too late and much more.

Arriving on the scene too late accomplishes little. "By then the commanders and their soldiers have coordinated their version" of events. Chances are "you'll never know what really happened."

Turkel 2.0 arrived years too late. It deals with "Israel's methods of investigating claims that its security forces violated the rules of war or international law," said Haaretz.

They reviewed dozens of files. They pertain to prior IDF investigations. They examined procedures used. They considered the process of deciding whether investigations should be opened.

Israeli procedures were compared to ones in America, Canada, Great Britain, Germany and the Netherlands.

They involve establishing new norms. They claim to want new government and military obligations with regard to Occupied Palestinian territory violations.

"The law should impose direct criminal responsibility on commanders and their civilian superiors for violations committed by their subordinates, if they do not take all reasonable measures to prevent these violations or do not bring those responsible to justice when they find out about violations after the fact," they said.

It wants all interrogations videotaped. Attorney General-set guidelines should be imposed. It hardly matters. Longstanding policy affords Palestinians and supporters no rights.

Video tapes can be manipulated or faked. Government and military officials will do or say anything. Standards accomplish nothing. Israel demeans Muslims. It affords them no rights.

"There should be a mechanism established for conducting a factual assessment, on the basis of which the military advocate-general will decide whether an investigation should be opened."

"The reporting requirement must be assimilated and sanctions imposed on commanders who do not fulfill this requirement."

Commission members want military advocate-general authority boosted. He should operate independently. He should have a fixed six-year term.

His rank should be fixed. He shouldn't be dependent on higher-ups for promotion.

"The authority of the military advocate-general to order an investigation should not be conditioned on consulting with the general responsible for the unit involved in the incident," they said.

A special Justice Ministry department for military law should be opened.

Few investigations are launched. Most are whitewashed. Low-level soldiers or government staff get occasional wrist slaps.

Their homes are bulldozed. Their land is stolen. They're dispossessed. Their liberating struggle is called terrorism. Turkel 2.0 changed nothing. Freedom remains no closer than earlier.