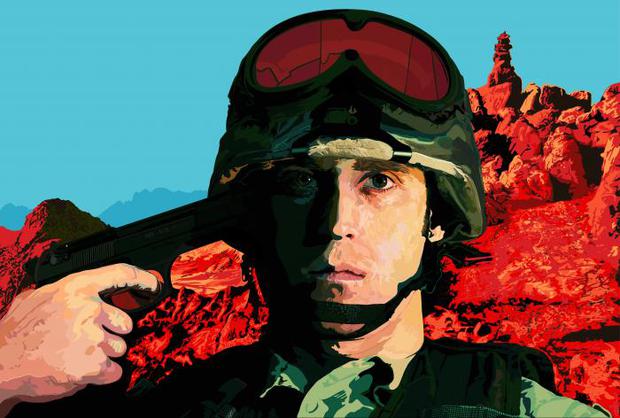 Record Numbers of US Military and Veteran Suicides

These reports and similar ones reveal imperialism's dark side. War takes its toll. Civilians suffer most. So do many combatants and veterans after returning home.

Most people don't know. Little gets reported. Why do active duty personnel and vets take their own lives?

Unbearable emotional pain consumes them. Daily trauma builds. So does intolerable stress. Relief is desperately sought. Suicide is chosen. It's a last option. Others were exhausted.

Daily stress is bad enough. Combat exacerbates it. It's intolerable for many. The little known human cost of war raises disturbing questions. America consumes its own.

The VA estimates over 30% of Vietnam vets, around 10% of Gulf War forces, and up to 20% of America's Afghanistan and Iraq troops.

In May 2012, AP said America's vets "are filing for disability benefits at (a) historic rate." They're the "most medically, mentally troubled generation in US history."

War's toll is one of the most underreported stories. Hundreds of thousands of combat vets won't ever be the same again.

They come home sick. They stay that way. They're traumatized. They're unable to cope. Emotional damage done goes largely unrecognized. It's an unseen wound. Many needing help don't get it.

Images, sounds, smells and subconscious feelings trigger them. Emotions well up inside. They surface self-destructively. It can happen any time. Some victims recover in months. For others it's much longer or never.

War is a destructive slippery slope. It drives victims to emotional hell. They're sure what afflicts them. PTSD prevents normal functioning.

Victims say they're too tired. They can't think. They can't function normally. Their brains are overwhelmed.

They lash out at others for no reason. They harm those they love. They can't explain why. Diagnosing PTSD is tricky. Often it's not done. Victims needing help don't get it. Others get too little. There's no cure.

Measurable physical/biological symptoms aren't apparent. Those mentioned above are commonplace. Others include headaches, unexplained pain, inability to cope, severe anxiety, rage, and survivor guilt for those who lost buddies.

Toughing it out depends on developing coping mechanisms. It's not easy without competent professional help. For many it involves longterm struggle. Too often it's too much to bear.

David Grossman analyzed the art of killing. His book titled "On Killing: The Psychological Cost of Learning to Kill in War and Society" explained an inherent aversion.

Doing so causes mental anguish and harm. For many it's too much to bear.

Combatants have to be taught to kill. Many do it reluctantly. Others abstain or try to. Either way takes a toll.

Killing "comes with a price, and societies must learn that their soldiers will have to spend the rest of their lives living with what they have done," said Grossman.

Many deaths aren't called suicide. They slip under the radar unnoticed. Many war zone-related suicides are misreported.

Those that are outnumber combat deaths. Officials numbers reflect nearly one a day. DOD and VA officials shun publicity. Getting it harms recruiting. Unwary kids are mislead. They're unaware what awaits them.

Many suicide victims are age 50 or older. Combat-related trauma is long-lasting. According to a Center for a New American Security (CNAS) suicide report, veterans commit suicide every 80 minutes.

"America is losing its battle against suicide by veterans and service members. And as more troops return from deployment, the risk will only grow."

Many vets return home feeling helpless. Marine Corps vet Jason Christiansen watched his life unravel. "At one point, I was sitting there with a gun in my mouth," he said. A friend urged him to seek help.

The Veterans Crisis Line gets hundreds of thousands of calls. CNAS said from 2005 - 2010, "approximately one service member committed suicide every 36 hours." Too little to late reflects DOD/VA policy.

PTSD-affected service members are redeployed. Many cope with drugs and/or alcohol. Others sent on combat missions try to stay out of harm's way. In war zones, it's not easy.

Socio-economic conditions at home compound mental trauma. Unemployment, homelessness, and related issues affect thousands. Numbers compound annually. For many it's too much to bear.

VA data through September 2012 reported 26,531 homeless vets. Double the number is more likely. Others risk losing their homes, rely on temporary housing, or get inadequate federal vouchers for rent.

Around 1.5 million vets risk homelessness. Numbers like this should shock. They go largely unreported. They, and others like it, reflect a time bomb of trouble.

It's largely unaddressed. A small fraction of those needing help get it. Others get too little. America's vets are hung out to dry. Funding prioritizes warmaking, not healing.

Since 2000, nearly a million vets were diagnosed with one or more mental health problems. The VA admits its data understate. Its own suicide hotline averages 10,000 calls a month.

More than a million vets await unaddressed disability claims. Many are PTSD-related. Months or years pass without help. They're last in line to get. Most never do. No wonder suicides mount.

Despair holds out only for so long. Left unaddressed, it often succumbs. America treats its own with disdain.

In January, the Supreme Court turned a blind eye. It declined hearing a lawsuit. It challenging abusive VA treatment. The constitutional rights of vets with mental health disabilities were denied.

Tens of thousands of troubled vets are at risk. Expect suicides to mount. National epidemic levels are swept under the rug. Waging war comes first. Obama has lots more in mind. It's the American way.