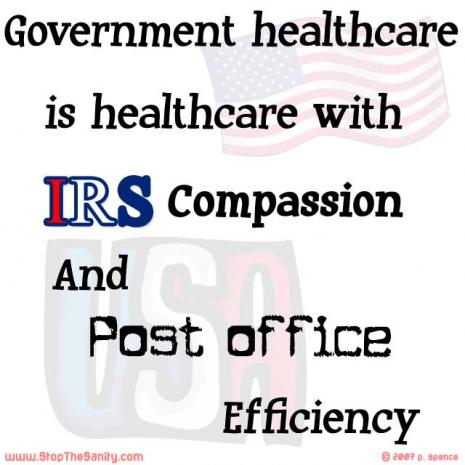 Make no mistake. March 23, 2010 will live in infamy. With strokes from 22 pens, Obama enacted the Patient Protection and Affordable Care Act (PPACA).

It's a ripoff. It's a healthcare rationing scheme. It's a boon to predatory providers. It's a plan to enrich insurers, drug companies, and large hospital chains.

WellPoint, Inc. is America's largest managed healthcare company. It wrote the plan. It got what it wanted. It benefitted at the expense of people needing care. So did other healthcare giants. They scammed ordinary people for profit.

Ralph Nader calls Obamacare "a pay-or-die system." It's "the disgrace of the Western world." It's a monstrosity. It mocks a fundamental human right.

"The Congress shall have power to….provide for (the) general welfare of the United States."

It means "We the People." It includes everyone equitably. It means what never was, isn't now, or won't ever be under a system favoring privilege, not fairness.

Western-style democracy is the world's biggest scam. Obamacare proves it. So do numerous other examples in representative/republican societies run by scoundrels in charge.

Affordable care is a figure of speech. It's more deform than reform. It's not universal care, single-payer or fair. It's market-based for profit. It does nothing to control costs. It's regulation light.

It's a boon for huge profits. It's got loopholes big enough to reap huge amounts. It helps business at the expense of ordinary people. It leaves tens of millions uninsured. It leaves millions more underinsured.

Legitimate democracies would have enacted what's badly needed. Comprehensive coverage requires universal single-payer. Everyone in. No one excluded.

Private insurers have no legitimacy except for those who want them. They're administrative middlemen. They game the system. They add hundreds of billions annually to costs.

They provide no care. They ration it. Obamacare lets them do it through unaffordable premiums.

It's time to "creat(e) a national, universal, publicly funded health care system, free of the corrupting power of profit-oriented health insurance, and at the same time capable of passing constitutional muster."

"In short, the right thing is an expanded and improved Medicare-for-All program, otherwise known as single-payer."

Nothing else provides healthcare equitably. Marketplace solutions don't work. They game the system for profit.

The only workable system is scorned. Universal single-payer helps everyone. Cost control makes it affordable. Everything people need is accessible.

There's "no other efficient and constitutionally safe way to do this." America's dysfunctional system failed.

Nothing ahead looks promising. Mergers and consolidation will increase costs, limit choices, reduce care, and keep millions from getting any.

Obama's Affordable Care Act promises higher costs. Doing so will deprive growing millions of vitally needed care. Many won't get any. Others will get much less than needed. Insurers and other predatory giants will game the system.

It's the cheapest one for a family of five. At the same time, credits are available for families who "lack affordable coverage." Whatever is provided won't match annually rising costs.

ACA was supposed to lower them. Saying so was a Big Lie. Even many supporters are disenchanted. It's "less of a deal" than they thought.

It wasn't supposed to be. It was a big win for predatory healthcare giants. It was designed that way.

In other words, it scams them. It prevents universal coverage, denies a public option, is unaffordable for millions, excludes many entirely, affords inadequate coverage for many more, permits high co-pays and coverage gaps, and leaves patients vulnerable to financial ruin in case of serious illness.

It allows rising predatory costs. It empowers private insurers. It lets them ripoff hundreds of billions annually for overhead, profit, huge salaries and bonuses. Every dollar scammed is one less for care.

"Union leaders say many (ACA) requirements will drive up costs for their healthcare plans and make unionized workers less competitive."

They want compensating federal subsidy help for lower-paid rank and file. Smith expects complaints "to get louder" ahead.

ACA "is a gimmie to Big Pharma and the health insurers." It works for large hospital chains. It exacerbates fundamental problems. It made America's dysfunctional system worse.

Consumers end up with "costly insurance that does not cover much." Expensive care will be hard to get or unaffordable. Many of America's most disadvantaged are left in no-man's land.

They'll be be uncovered by federal benefits and ineligible for subsidized insurance. ACA provides 100% of funds to expand Medicaid until 2016. Thereafter, it's 90%.

Until now, federal funding required state participation. No longer. Millions will be harmed. Many will be left out entirely.

Medicaid expansion provided coverage for around 17 million Americans by 2019. States now can opt out at their discretion.

Bipartisan complicity assures it. It's part of their scheme to destroy America's social contract. ACA is an integral component. Ordinary people should have opposed it when they had a chance. They'll have cause to reflect when ill.

Is Eating Dandelions Good for You? | Super Foods: The Real Story

Is There Medicine Growing in Your Backyard?