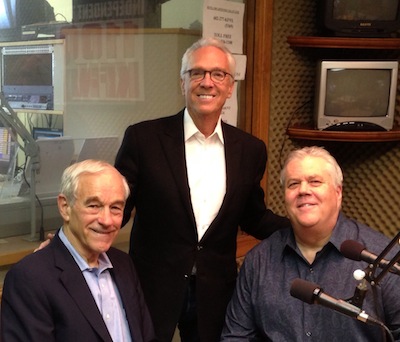 BEVERLY HILLS, CA – February 13, 2013 - Courtside Entertainment Group announced today that former Congressman and Presidential Candidate Ron Paul will make his national radio and podcast debut March 18, 2013. Ron Paul’s America will feature one of America’s most popular public figures sharing his thoughts and opinions on the issues listeners care about in twice daily one-minute radio commentaries with radio veteran and bestselling author Charles Goyette. In addition to the daily commentaries, Ron Paul’s America will also be available as a weekly podcast to satisfy the growing demand for on-demand digital content.

“There’s no questioning the fact that Ron Paul is one of today’s most impactful leaders. His thoughts and opinions have created a significant and loyal following that has made its presence known throughout the country,” said Norm Pattiz, Founder of Westwood One and Courtside Entertainment Group and Chairman of Launchpad Digital Media. “That following includes college campuses, corporate offices and everything in between. His new radio show for Courtside and his digital presence via podcasting create a platform that will be hugely successful.”

“I am very excited to have this opportunity to take the message of freedom to more people than ever, especially now when our country needs it so much,” said Ron Paul. “Radio and podcasting are a much more powerful means of communication than speaking on the floor of Congress.  I welcome this chance to work with Norm and Courtside and interact with America in a new way, delivering a message that is timelier than ever and a philosophy that people are clearly hungry to hear more about.”

My Name Is: Mr. Thomas C Hosburgh, and:

I think enough is enough, our Freedoms, are being Systematically taken away from 250+ million Americans by our so-called Current Administration. We are sitting on our hands, while the current administration engages in all sorts of mischief, designed to Split the bond most Americans have for our freedoms, and change the Constitution, by assaulting the first, second, and the twenty second amendments.

Where did all these nosy people come from? What happened to live, and let Live?

Why is it that we have not started the Articles of Impeachment, for the Lying Cheating Stealing?

Chicago Machine Politics, of Brack Obama? He has stolen the futures of the next 4 generations, of Americans. He is in fact enslaving them in poverty, before they are born. He has shown that he has nothing but contempt for the USA, and blames us for the colonialism around the world. He is now giving top end fight jets to our enemies.

Why don’t we wake up and get ride of this, festering, blister on the backside of our nation. We need to rise up and come together, and say no, do not even think about touching our Constitution. No more stupid, Unnecessary frivolous laws. Keep your hands off our nations ability to create jobs. Stop squandering the Tresures of the United States of America, and the people who provide the Governmant, with their hard-earned TAX, contrbutions.

Despite the abuse of average citizens by thuggish law firms and prosecutors, from this Administration. Obama continues to support draconian measures against citizens of the United States of America. We are being destroyed from within.

He has completely failed, his oath of office, and was AOL, for the 4 Americans who died in Benghazi

President Obama has repeatedly pledged not to provide healthcare to illegal immigrants, but is being done as you read this comment

He has been stealing the Treasures of the USA ever since we gave him the keys to the White House.

'The Government Has Destroyed Medicine' - With Special Guest Del Bigtree

Free Speech Freak Out: Censors Panic As Musk About To Purchase Twitter

Who Blew Up The Pipeline? The Plot Thickens!

Revolution in Italy? Voters 'Threw The Bums Out!'

Will Italy's Election Foreshadow US Midterms?