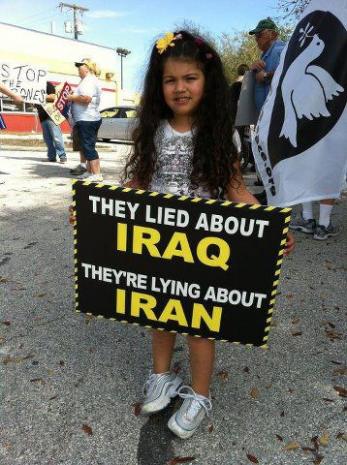 Beating Up on Iran Continues

It wants pro-Western ones replacing them. It doesn't care if they're democratic, despotic or anything in between. Subservience to Washington alone matters.

"The three external challenges that we face begin with Iran. I spoke about Iran's plan to develop nuclear weapons. Its nuclear weapons program continues unabated."

"It's focused on enrichment because if they can continue and complete the enrichment of high enriched uranium, then they'll have enough to produce enough material to produce a nuclear bomb."

"I drew a line at the UN, last time I was there. They haven't crossed that line, but what they're doing is to shorten the time that it will take them to cross that line."

And the way they're shortening that time is by putting in new, faster centrifuges that cut the time by one third, so that Iran is putting itself in a position to cross the red line and have enough material to produce one nuclear bomb's worth of highly enriched uranium."

"How do you stop it? Well, you have to put greater pressure on them. You have to upgrade the sanctions."

"And they have to know that if the sanctions and diplomacy fails, they will face incredible military threat. That's essential. Nothing else will do the And it's getting closer."

He urged US/Israeli cooperation on Iran. He wants its independent government toppled. He's willing to wage war to achieve it.

Israelis had a chance to reject him. They have themselves to blame. They're stuck with him for four more years.

Michael Oren is Israel's US ambassador. He deplores peace. He mocks democratic values. He lies for his government.

He blamed Tehran for Israel's Burgas, Bulgaria false flag. A bus carrying Israeli tourists and others was attacked. Eight deaths were reported. Around 30 others were injured.

The charge resembled a bad film plot. It was baseless. Officials pointing fingers the wrong way knew it.

In February 2012, Israel again levied false charges. India and Georgia incidents were cited. Israeli embassy workers in both countries were allegedly targeted. One injury was reported. No one was killed.

A Bangkok, Thailand incident happened around the same time. Iranians were detained after an explosion damaged their rented house. Despite no credible evidence, they were suspected of targeting Israeli diplomats.

Iran threatens no one. It painstakingly avoids provocations. It has everything to lose and nothing to gain from them. Israel benefits greatly. The above incidents and many others bore classic Mossad fingerprints. So does Bulgaria.

He does it poorly. He needs more practice. Perhaps he'll never develop the dark art. Don't expect him to stop trying.

He falsely accuses Iran of numerous incidents. In cities "across across five continents, community centers, consulates, army barracks and houses of worship have been targeted for destruction," he claims.

"Thousands have been killed. Perpetrators are agents of Hezbollah and the Quds Force, sometimes operating separately and occasionally in unison. All take their orders from Tehran."

Lies proliferate. Claims bears no relation to reality. Liars don't use facts to back up accusations. Media scoundrels don't hold their feet to the fire.

Connect the dots, he says. He invents ones he wishes. He avoids mentioning others too disturbing. He whitewashes Israeli culpability. Its terror state credentials are longstanding.

It menaces regional stability. It harms Jews and non-Jews alike. It's a blight on humanity. It's been that way since inception.

The Jewish Institute for National Security Affairs (JINSA)  has high-level Israeli/Washington connections. It calls itself "the most influential group on the issue of US-Israel military relations."

It "advocate(s) on behalf of a strong U.S. military, a robust national security policy and a strong U.S. security relationship with Israel and other like-minded democracies."

It supports Israeli lawlessness, its regional dominance plans, and belligerence directed at Palestinians and other regional enemies.

It seeks full Washington support. It wants both countries in lockstep on policy. On February 8, it headlined "Nuclear Proliferation Realities - North Korea and Iran Immune to Traditional Arms Control."

It claims Pakistan, China and Russia cooperate with both countries "on both ballistic missile systems (used to deliver warheads) and nuclear weapons technology."

No corroborating evidence is cited. Guilt by accusation suffices.

Bush officials shut down Pakistan's AQ Khan connection. He's believed to be the father of its nuclear bomb. Jinsa claims he heads a "Nukes 'R Us" consortium. It "proliferates nuclear weapons technology," it claims.

It calls Saddam Hussein's Iraq "illustrative." He "surprised everyone with the advanced state of (his) nuclear program."

New and improved weapons replace older ones. It's an ongoing process. It represents new wine in old bottles.

Washington's destructive capability is greater than ever. So is Israel's. Jinsa leaves inconvenient facts unexplained. It points fingers the wrong way.

It's unapologetic. Washington and Israel menace humanity. Iran, North Korea, China and Russia threaten no one. Not so, says Jinsa.

"The coalition of state sponsors of terrorism is alive and well." China and Russia are complicit, it says.

Russia helped North Korea develop "small nuclear warheads with an electro-magnetic pulse (EMP) capability." Its warheads are "as small as 500 kilograms, showing necessary progress toward successfully mating a warhead with a missile."

North Korea may one day be able to do so and more. Its capability falls far short today. Nothing suggests otherwise.

Jinsa makes similar accusations against Iran. Lies substitute for truth and full disclosure. Repetition gets readers to believe them.

North Korea's nuclear test "brings Iran that much closer to conducting" its own, it claims. Both countries collaborated for years, says DF.

"These actions by North Korea, in violation of its international obligations, must be" countered post haste, it urges.

"A clear message must be sent to North Korea and to other countries that such activities are unacceptable and cannot be tolerated," it added.

Pyongyang's nuclear test was condemned. It was called "a clear threat to international peace and security." How wasn't explained.

North Korea threatens no one. Its nuclear program is defensive. It's responsible for protecting its people. It chose nuclear power to do so.

South Korea currently serves as Security Council president. Its Foreign Minister, Kim Sung-hwan, said "North Korea will be responsible for any consequences of this provocative act."

US ambassador Susan Rice called its test "highly provocative." It threatens "the security of a number of countries including the United States."

"This will not be tolerated," she added. "North Korea (will face) increasing isolation and pressure under United Nations sanctions."

Rice hoped to replace Hillary Clinton at State. She matches her bullying, bluster and arrogance.

Both deplore peace, nonviolence, and social justice. They're pro-war, contemptuous of rule of law principles, and brazenly anti-democratic.

They give diplomacy a bad name. They're embarrassments to legitimate governance. They're two of America's worst ever envoys.

They represent wrong over right. They're war criminals multiple times over. They're indifferent to human suffering. They disgrace America and humanity.

North Korea's heard it all before. So has Iran. Neither country intends rolling over for imperial Washington. It remains to be seen what follows.

"We have to reach a point where no country will carry out military nuclear activities, and all nuclear weapons and weapons of mass destruction will be destroyed, but on the other hand, all countries will have the right to use nuclear know-how for peaceful purposes."

Iranian overtures go unnoticed. They pass below the radar. Conflict resolution proposals are ignored. Washington and Israel prioritize violence and instability. Nothing ahead looks promising.