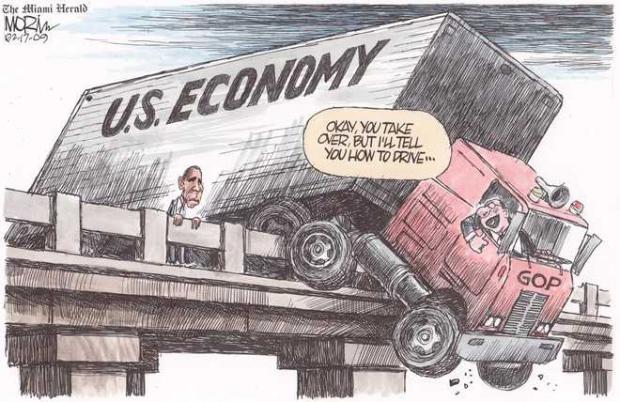 Obama's address targeted Medicare. He called "medical care for the aged….the biggest cause of the nation's longterm debt."

In 2009, Obama prioritized cutting healthcare costs and "restoring fiscal discipline." He made doing so the top "pillars" of his agenda, saying:

We've "kicked this can down the road. We are now at the end of the road and are not in a position to kick it any further."

"We have to signal seriousness in this by making sure some of the hard decisions are made under my watch, not someone else's."

"The big problem is Medicare." Its cost is "unsustainable."

"Let's not kid ourselves and suggest that we can solve this problem by trimming a few earmarks."

The "biggest cost drivers in our budget are entitlement programs like Medicare, Medicaid, and Social Security, all of which get more and more expensive every year."

Obama did what he does best. He lied. He's a serial liar. He supports wealth and power. He's beholden to powerful monied interests. They own him. He spurns popular needs. He prioritizes letting them go begging on his watch.

He wants fundamental social benefits destroyed. He wants ordinary people hung out to dry. He wants them on own sink or swim.

Healthcare for millions already is unaffordable. Implementing Simpson-Bowles makes it more so when most needed. Illnesses will go untreated. Pain, suffering, and early deaths will follow. Rogue leadership assures it. Obama reflects the worst of irresponsible lawless leaders.

His jobs proposals reveal more. His address rehashed old schemes. His September 2011 "American Jobs Act" promised "putting more people back to work" with no plan to do it.

It showed contempt for ordinary households. It was same old, same old. It concealed another thinly veiled wealth transfer scheme.

He wants the nearly completed Trans-Pacific Partnership (TPP) adopted. It's a trade deal from hell. It's a secretive, multi-nation agreement.

National sovereignty is at stake. Signatory countries must change domestic laws, regulations, and other policies to comply.

Obama called for replicating TPP with EU countries. He urged establishing a Trans-Atlantic Partnership. He prioritizes corporate empowerment over human rights and needs. He's got much more in mind.

He supports extrajudicial killing. He's got kill list authority. It's official US policy. Drones are his weapon of choice. He appointed himself judge, jury and executioner.

He wants anyone he targets assassinated. US citizens are included. Rule of law protections don't apply. Summary judgment has final say. No one's safe anywhere. There's no place to hide.

His address made clear where he stands, saying:

"Where necessary, through a range of capabilities, we will continue to take direct action against those terrorists who pose the gravest threat to Americans."

Doing so subverts fundamental international, constitutional, and US statute laws. They're null and void. His say overrides them. Unchecked power is policy. Full-blown tyranny's a hair's breath away. Congressional leaders are supportive.

He's got much more in mind. He's four more years to wage war on humanity. Expect him to take full advantage.

My Name Is: Mr. Thomas C Hosburgh, and:

I think enough is enough, our Freedoms, are being Systematically taken away from 250+ million Americans by our so-called Current Administration. We are sitting on our hands, while the current administration engages in all sorts of mischief, designed to Split the bond most Americans have for our freedoms, and change the Constitution, by assaulting the first, second, and the twenty second amendments.

Where did all these nosy people come from? What happened to live, and let Live?

Why is it that we have not started the Articles of Impeachment, for the Lying Cheating Stealing?

Chicago Machine Politics, of Brack Obama? He has stolen the futures of the next 4 generations, of Americans. He is in fact enslaving them in poverty, before they are born. He has shown that he has nothing but contempt for the USA, and blames us for the colonialism around the world. He is now giving top end fight jets to our enemies.

Why don’t we wake up and get ride of this, festering, blister on the backside of our nation. We need to rise up and come together, and say no, do not even think about touching our Constitution. No more stupid, Unnecessary frivolous laws. Keep your hands off our nations ability to create jobs. Stop squandering the Tresures of the United States of America, and the people who provide the Governmant, with their hard-earned TAX, contrbutions.

Despite the abuse of average citizens by thuggish law firms and prosecutors, from this Administration. Obama continues to support draconian measures against citizens of the United States of America. We are being destroyed from within.

He has completely failed, his oath of office, and was AOL, for the 4 Americans who died in Benghazi

President Obama has repeatedly pledged not to provide healthcare to illegal immigrants, but is being done as you read this comment

He has been stealing the Treasures of the USA ever since we gave him the keys to the White House.