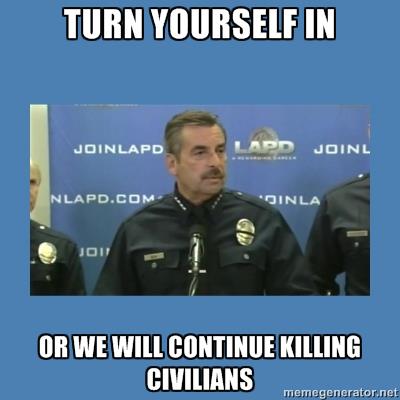 Michael Ruppert is a former LAPD cop. He knows its dark side well. He witnessed it firsthand.

An organized criminal subculture exists. Anti-gang officers and supervisors run it. They "celebrate" shootings. They get away with murder.

"From my own experience as a Los Angeles police Officer and deep familiarity with both LAPD culture and history, I can say that with regards to Christopher Dorner's allegations regarding internal corruption, favoritism, racism and concealment of excessive force, I believe him 100%."

"My life as an investigative journalist focusing extensively on military, paramilitary and covert operations gives me absolute certainty that this man is an extremely dangerous weapon."

"He is killing here in the United States the way too many US service members have killed routinely and with much less concern about Rules of Engagement overseas for decades."

"I am also certain that his presence on the streets and any
new engagements will put stresses on huge fault lines within law enforcement agencies in Southern California."

He never got a chance. LAPD cops killed him. Ruppert predicted they would. They wanted him silenced. A SWAT team may have gunned him down.

They surrounded his cabin. Gas was pumped in. LAPD cops made reference to "burners." One voice said "We're going to burn him out.  Another shouted "f…king burn this motherf…king house down." One more said "Seven burners were deployed and we have a fire."

Voices were loud enough for CBS affiliate KCAL 9 to broadcast them live on air. Immediately the audio feed was cut.

Key facts were suppressed. Wrongdoing was ignored. Atrocities passed under the radar. Washington got away with murder.

So did LAPD cops. They set Dorner's cabin ablaze. Fire department units were ordered not to respond. Dorner was incinerated. He never had a chance. Hours later his charred body was found.

He expected to die. He said so on Facebook. Different versions of his manifesto exist. It denounces dozens of LAPD cops for corruption, racism and violence.

Rogue cops don't apologize for wrongdoing. Dorner knew how they operated. He went public explaining it. Doing so marked him for death. LAPD officials wanted him silenced. Extrajudicial killing is policy. Dead men tell no tales.

LA police don't protect and serve. They abuse. They target suspicious suspects and people of color brutally. They use deadly force. Dorner witnessed things firsthand. His experience made him violent.

In 2007, he witnessed white training officer, Sgt. Teresa Evans, kick an unarmed/handcuffed person of color in the stomach and face.

He reported what he saw. He was fired for doing so. An LAPD Board of Rights said he lied.

Truth-telling is hazardous. He said he "saw some of the most vile things humans can inflict on others."

Enemy combatants in LA aren't citizens and suspects. They're rogue cops. LAPD's culture breeds them. The department's been that way for decades.

Brutal cops get promoted to supervisory and command positions. An officer involved in Rodney King's beating became a captain.

Who said crime doesn't pay? It does when rogue cops commit it. Many examples bear witness. On February 7, police opened fire without warning.

They fired dozens of rounds at 71-year old Emma Hernandez and her daughter Margie Carranza. They were delivering newspapers at the time.

They had no connection to Dorner. Cops claimed their vehicle matched his. So do many others.

They were put on administrative leave. Hand slap punishment at most will follow. Hernandez was shot twice in the back. She's in intensive care. Carranza had minor wounds. No one else was hit.

Fortunately the driver wasn't hit. He ducked and avoided injury. He could have been killed. Fire, ready, aim is official LAPD policy. Anyone close by is vulnerable.

Mike Davis is a political activist, urban theorist, and historian. On February 11, he headlined "Exterminating Angels."

He referenced Dorner's manifesto. It reflects "unendurable depression that descended on (him) after his" LAPD dismissal.

Perhaps he had LAPD cops in mind. Police criminality isn't new. It's rife in US cities and communities. It pervades them like crabgrass infests lawns.

Dorner explained "how a police Explorer Scout" went from LAPD rookie to persona non grata "for being an honest cop." He debunked notions about a kinder, gentler, more diverse LAPD.

He witnessed indiscriminate sadism, racism, corruption, extrajudicial killing, conspiracies, and other high crimes. He raged at injustice. He wanted revenge.

He began by killing a cop's daughter and fiance. Doing so doomed him. "Does anyone cheer Dorner," Davis asked? He's dead.

Stories like his have short shelf lives. Family, friends, people of conscience, and killer cops alone will remember.