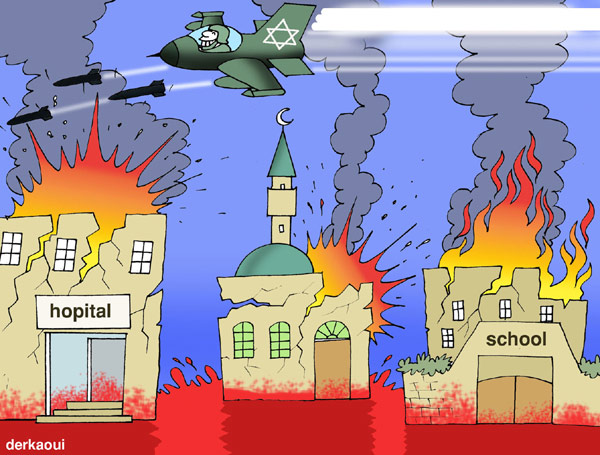 Human Rights Watch (HRW) said so. Rarely does HRW do the right thing. Exceptions prove the rule. Most often it's a reliable imperial partner.

Connections in high places and corporate funding keep it that way. Services rendered in return are expected. Conflicts of interest are rife.

HRW and likeminded sources followers rely on operate like their scoundrel media counterparts. They do it deceptively. They produce one-sided or quasi-real reports on issues mattering most.

Exceptions occur. Even then they fall far short. On February 12, HRW headlined "Israel: Gaza Airstrikes Violated Laws of War." More on its report below.

International laws of war are clear. They unambiguous. UN Charter provisions explain under what conditions attacking another nation is justified. No others apply.

Article 2(3) and Article 33(1) require peaceful settlement of international disputes. Article 2(4) prohibits force or its threatened use.

Article 51 allows the "right of individual or collective self-defense if an armed attack occurs against a Member....until the Security Council has taken measures to maintain international peace and security."

Justifiable self-defense is permissible. Articles 2(3), 2(4), and 33 prohibit unilaterally threatening or using force not allowed under Article 51, authorized by the Security Council, or, in the case of America, constitutionally permitted.

(1) The 1965 Declaration on the Inadmissibility of Intervention in the Domestic Affairs of States and the Protection of Their Independence and Sovereignty.

(2) The 1970 Declaration on Principles of International Law Concerning Friendly Relations and Cooperation among States in Accordance with the Charter of the United Nations.

Washington spurns international, constitutional, and US statute laws with impunity. So does Israel. Doing so constitutes "the supreme international crime against peace." It exceeds all other high crimes and wrongdoing.

Israel considers them legitimate targets. Rogue states operate that way. Israel is one of the worst. It violates fundamental international law. It does so unaccountably.

It claims a divine right to kill, main, displace, and destroy. It takes full advantage.

It steals Palestinian land for Jews. It punishes them collectively. It does so for praying to the wrong God. It's been that way for decades.

It grossly understated civilian deaths and injuries. It said little about mass destruction. Why it has to explain. It said 14 drone or other aircraft strikes had no legitimate military targets.

"In four other cases, attacks may have targeted Palestinian fighters, but appeared to use indiscriminate means or caused disproportionate harm to civilians."

Drones and fixed-wing aircraft were used. Hamas and other resistance groups responded defensively. It's their legitimate right to do so.

Not according to HRW.

"Palestinian armed groups launched hundreds of inherently indiscriminate rockets against Israeli population centers in violation of the laws of war," it said.

"Whatever the weapon used and the conduct of the other side, the laws of war are applicable and parties to the conflict are obliged to respect them."

Palestinians observe what Israelis spurn. On November 14, Israel murdered Hamas military commander Ahmed Jabari. It did so in cold blood.

Hours before his assassination, he concluded a draft truce agreement. Ways for establishing ceasefires in case of future flare-ups were included.

Jabari worked with Egypt for permanent peace. Israel murdered him to prevent it. Peace, stability, and Palestinian unity defeat its agenda. Conflict and violence are prioritized.

It named names of Palestinian victims. Included were a three-year old boy, a 79-year old man, a 14-year old girl, a farmer and his nephew, a 28-year old woman, a father and his two children aged two and four, and a woman and four children, among others.

Gaza City's hospital was struck. So were other civilian targets. Doing so was unrelated to military necessity. Electricity, water, and other services were lost.

"The laws of war prohibit attacks in which the expected loss of civilian life and property exceeds the anticipated military gain," said HRW.

"An aerial bomb may (or may not) have targeted a member of Hamas' armed wing." A family house was destroyed.

A father's wife and 17-year old brother were killed. Six other siblings were wounded.

"Parties to a conflict have an obligation under the laws of war to take all feasible precautions to reduce the risk to civilians."

They plan other attacks and kill again. They do so with impunity. They cause disproportionate civilian deaths and destruction.

They inflict enormous human misery. They whitewash investigations when conducted. They mock rule of law principles.

HRW said the "burden is on the Israeli military to show that attacks killing large numbers of civilians were lawful."

Naked aggression is illegal. HRW didn't explain. Instead it said "attacks with no apparent military objective" aren't legitimate. None are justified when conducted lawlessly.

HRW deserves credit for saying Israel violated the laws of war. Stopping short of full disclosure marred its report. Palestinians deserve much better. They've waited for too long for justice.