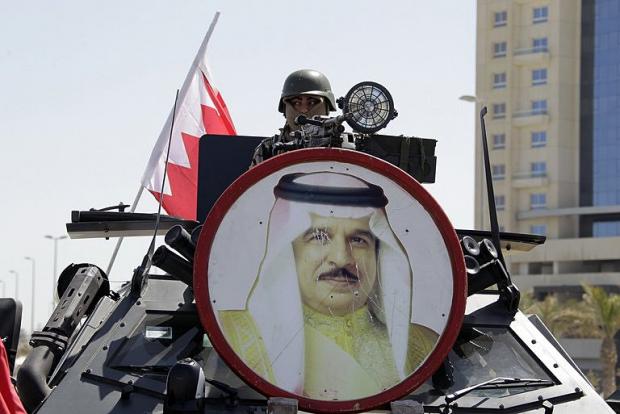 In mid-February 2011, major ones did nonviolently. They continue virtually daily. At issue is King Sheikh Hamad bin Isa Al-Khalifa's tyranny.

Bahrain's the home of America's Fifth Fleet. Generous aid's provided. So are weapons and political support.

The Bahrain Center for Human Rights (BHCR provides ongoing reports. It's works for:

"a prosperous democratic country free of discrimination and other violations of human rights."

It says its mission is to "encourage and support individuals and groups to be proactive in the protection of their own and others' rights; and to struggle to promote democracy and human rights in accordance with international norms."

Its four objectives include:

Its new report headlines "Two Years of Deaths and Detentions: Documenting Human Rights Abuses During the Pro-Democracy Movement in Bahrain."

After two years of repression, Bahrainis want democratic change. They want peace. They're uncompromising. They won't allow "their human rights to be trampled upon."

They've come much to far to stop now. They're in it for the long haul. They won't yield until equity and justice are achieved.

BCHR documented 87 deaths in two years. Extrajudicial killing is official Al-Khalifa policy. Rogue states operate that way. Bahrain is one of the worst.

Young children, adults with respiratory problems, pregnant women, and the elderly are most vulnerable. Indiscriminate security force targetin killed them.

Extrajudicial shooting accounted for 31% of deaths. Most often shotgun pellets were responsible. Bahrain uses them indiscriminately. Peaceful demonstrators are attacked. Bystanders are struck.

A five-year old child was shot selling fish with his grandfather. No protest was nearby at the time.

Torture and beatings accounted for 18% of deaths. Another 12% of causes were responsible for others. They include victims run down by police cars, denying injured victims treatment, and deaths by authorities for miscellaneous reasons.

The Bahrain Independent Commission of Inquiry concluded that "the very fact that a systematic pattern of behavior exist(s) indicates that this is how these security forces were trained and how they (are) expected to act."

Nothing could have happened without high command orders. Deaths are well documented. Unaccountability is policy. Nothing ahead suggests change.

"Not only are prison authorities unpunished for these acts, but they are at times rewarded." Promotions follow. A culture of impunity exists.

Prolonged isolation is common. Prisoners are confined in two by two meter cells. Sometimes they're with another detainee "who does not share a common language."

If either tries communicating with the other, they're beaten. Food and water quality are deplorable. They're unsafe to ingest. Medical care is non-existent.

Thousands have been arrested. Others are apprehended daily. Politically motivated reasons account for detaining them.

"When you want to judge a human rights situation in any country, look where the human rights defenders are. In Bahrain, they are in prison."

Many victims are children or youths. False confessions are extracted. Bogus charges follow. Justice is denied. Incarceration and brutal prison conditions assure it.

Other violations include a "broken judicial system." It's a political tool. Fair trials are "rare" or "impossible." Due process is routinely ignored.

Bahrain's constitution guarantees judicial independence in principle. Reality subordinates it to King Hamad. What he says goes. He chairs the Higher Judicial Council.

Bahrain's legal system "continues to support (a) culture of impunity throughout all levels of the administration, and the people of Bahrain are left voiceless against their own government."

Medical professionals have been under constant attack. Providing services to injured protestors is criminalized. Arrests occur in hospitals. Some are made in operating rooms. Others happen in offices or homes.

"Doctors (are) eyewitnesses to government atrocities and extrajudicial killing of peaceful protesters. For this reason, (they're among) the first groups targeted by authorities."

It's done to punish and silence them. Arrests, torture, and show trials follow. So do long prison terms.

"Not only are the convicted medical personnel not allowed to return to work, but also those who were acquitted of all charges."

Bahraini rulers are Sunnis. Ordinary people reject them. Since February 2011, dozens of Shia mosques and other places of worship were demolished. Rebuilding is denied. Equal protection doesn't exist.

They're arbitrarily arrested. They're targeted for doing the right thing. Some disappear. Others are killed. "Dozens were detained and arbitrarily deported."

Doing so blocks truth and full disclosure. Anti-regime websites are blocked. A tweet "calling for democracy is enough to land a person in prison for several years."

Accountability is null and void. A culture of impunity exists. Human rights abuses are appalling. Recommendations made aren't adopted.

Nothing ahead suggests change. A culture of despotism persists. Bahrain's liberating struggle continues.

On December 9, 1998, the General Assembly's "Declaration on the Right and Responsibility of Individuals, Groups and Organs of Society to Promote and Protect Universally Recognized Human Rights and Fundamental Freedoms" recognized the legitimacy of human rights defenders.

It affirmed their freedom of association and right to pursue their activities freely. It did so without fear of reprisals.

"Everyone has the right, individually and in association with others:

(b) As provided for in human rights and other applicable international instruments, freely to publish, impart or disseminate to others views, information and knowledge on all human rights and fundamental freedoms."

1. "Everyone has the right, individually and in association with others, to participate in peaceful activities against violations of human rights and fundamental freedoms."

2. "The State shall take all necessary measures to ensure the protection by the competent authorities of everyone, individually and in association with others, against any violence, threats, retaliation, de facto or de jure adverse discrimination, pressure or any other arbitrary action as a consequence of his or her legitimate exercise of the rights referred to in the present Declaration."

Doing so sent a message. Fundamental freedoms won't be sacrificed. They're too important to lose. Surrendering them isn't an option. Not now. Not ever.