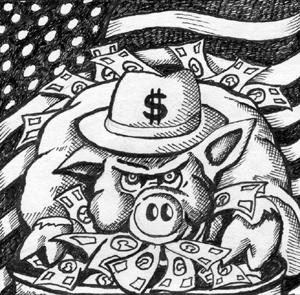 Big Lies proliferate. Repetition convinces most people hard times are good or not as bad as their personal situations suggest.

Government officials collude at the highest federal, state and local levels. They're well rewarded for going along. Who said crime doesn't pay?

Swindling is the national pastime. It's the American way. It's institutionalized. So are casino capitalism, market manipulation, front-running, pump and dump schemes, and other fraudulent practices.

It's hard imagining greater brazenness. It's harder knowing the Supreme Court ruled banks and other financial entities immune from securities fraud by those harmed.

No one knows for sure what's coming when. The late Bob Chapman warned about impending crisis conditions. He predicted an eventual house of cards collapse. Only its timing remains uncertain. It could come any time from now to 2017, he believed.

America's economy is much weaker than reported. Europe's in crisis. Conditions have been deteriorating for years.

Billionaire investor George Soros warns about a potential EU breakup. He compared it to Soviet Russia's dissolution. "The European project is stalled," he said.

"And if it can't go ahead from here, it will go backwards. (T)he euro will go to pieces and the European Union, too."

He lied to Spanish citizens. He denies troubled conditions. He claims bankrupt Spanish banks are solvent. Public rage rejects him.

"There can be absolutely no trust in" politicians like him. Transparency doesn't exist. Nor do fairness or sound policies. "The EU crisis will (fester) until this sort of corruption, fraud," and government malpractice ends.

They're "all implicated in corruption scandals" and other type financial malpractice.

"German Finance Minister Wolfgang Schaeuble has asked a panel of advisers to look into reform proposals for France, concerned that weakness in the euro zone's second largest economy could come back to haunt Germany and the broader currency bloc."

Two officials spoke on condition of anonymity. They drafted a report on what France should do. So-called "wise men" said:

"The biggest problem at the moment in the euro zone is no longer Greece, Spain or Italy, instead it is France, because it has not undertaken anything in order to truly re-establish its competitiveness, and is even heading in the opposite direction."

France now faces its own crisis. It bodes ill for the euro and EU. Germany also faces slowdown. Its economy was hard hit in 2012 Q IV. It dropped 0.5%. Annual growth fell 0.7%.

It shrank more than any time "in nearly three years as traditionally strong exports and investment slowed."

Europe's unravelling "at the precise time that EU banks are showing warning signs and the most important EU economies are heading sharply south."

Massive monetary intervention and promises of much more alone held Europe together so far.

Spain raided 90% of its social security fund. It did so to buy sovereign Spanish debt. It robbed ordinary people in the process.

Corruption scandals threaten to collapse its house of cards. It could happen when least expected.

In 2009 he resigned. He faced charges alleging kickbacks and illegal payments. Other party officials were involved.

Spanish corruption is pervasive. Hundreds of political figures are involved. Prime Minister Rajoy has unrevealed skeletons in his closet.

Other EU scandals threaten to erupt. Bits and pieces slip out. Doing so suggests much more to come. Expect potentially major political and financial fallout.

In 2012 Q IV, the Eurozone economy declined 0.6%. France is teetering. Powerhouse Germany shows weakness. Britain's in recession. Major economies are too big to bail out. Day of reckoning time may arrive sooner than expected.

Summers expects trouble in 2013. European reality suggests collapse, he says. "It's only a matter of time." It'll be far worse than 2008 when it happens.

Markets are dismissive, he says. They're disconnected from reality. They approach all-time highs when depression conditions affect growing millions.

The Fed may begin gradually removing the punch bowl. Its January 3 minutes expressed concerns. Continued accommodation could do more harm than good.

US raw steel production is down about 6% year-over-year. Railroad traffic is negative. So are Port of Los Angeles and Seattle containers shipped.

"Investors are tripping over each other in catching the risk train," says Rosenberg. It's happening as insider selling gathers steam.

In 1995 - 1997 and 2004 - 2007, a high sell-to-buy ratio preceded market declines. Rosenberg wants positive confirmation before turning bullish. From his perspective, it's absent.

Jobs, benefits, living standards, futures and economies are wrecked for profits. Institutionalized inequality is policy. It's hard imagining why people don't resist. The only solution is world revolution.

George Bernard Shaw once said "Democracy is a form of government that substitutes elections by the incompetent many for the appointment of the corrupt few." Western societies offer proof.

Obama governs to the right of George Bush. He wages war on humanity. He looted the nation's wealth. He wrecked the economy.

He sacrificed people needs and institutionalized tyranny. He presides over a bogus democracy under a repressive police state apparatus.

On February 8, Money Morning chief investment strategist Keith Fitz-Gerald headlined "As Insiders Head for the Exits, Do They Know Something 'We' Don't Know."

Whenever markets look "toppy," watch out, he said. Recent insider trades reflect nine sales for every buy. They're more often right than wrong.

Predatory finance is a new form of warfare. It's more destructive than standing armies. It wrecks millions of lives. People don't have enough to live on. Venal politicians support policies this harmful.

When pain levels cross a threshold of no return, all bets are off. Celente says "(w)hen people lose everything and have nothing else to lose, they lose it."

Hopefully it'll be soon enough to matter. The world can't tolerate much more.

BREAKDOWN: Basic Services And Supply Chains Are Rapidly Breaking Down All Over The Globe