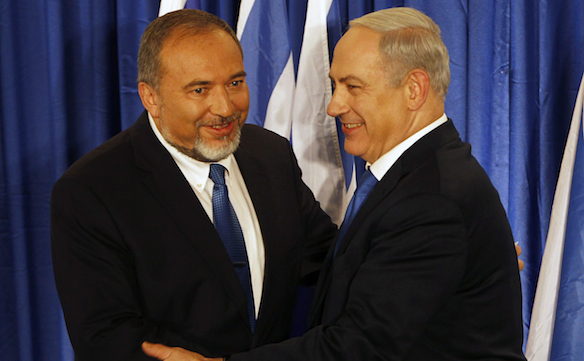 He's an ultranationalist extremist. He represents the worst of Israel's lunatic right-wing fringe. He matches Netanyahu's zealotry.  He out-Sharon's Sharon.

He's a latter day Kahanist. In 1988, Israel outlawed his Kach party. It was the first Jewish organization in decades to be called a "threat to national security."

It's resurrected writ large. Lieberman represents Israel's true face. He and majority Israeli hardliners reflect a cancer in the body politic. They're an abomination. They consider Muslims subhuman. They deplore democratic freedoms.

They prioritize persecution, violence and state terror. They legitimize institutionalized racism. They practice it in its worst form. They promote Arab hatred. They spurn rule of law principles.

In May 2010, they recommended adding breach of trust. It was for receiving classified information about his criminal investigation. Doing so violated Israeli law.

In September 2001, he went on trial. He admitted assaulting a 12-year old boy. It was in December 1999. It was in the Nokdim settlement.

The child allegedly hit his son. Boys scrap with other kids often. Fathers seldom intervene violently. He was charged with assault and threatening a minor.

He was convicted. He copped a plea. He paid a small fine to avoid harsher punishment. He got off virtually scot-free.

His day in court arrived. Haaretz explained serious reservations earlier. On December 25, it headlined "The prosecution's negligence over Lieberman," saying:

"Who in the prosecution will be held accountable for its flawed conduct throughout the entire Lieberman case?"

Before his indictment, Attorney General Yehuda Weinstein "wavered over whether it was really appropriate to attribute criminal significance to the matter."

"Ben Aryeh clearly committed breach of trust. As a public employee, he is required to be loyal to the law and the state, not to a private citizen."

Lieberman was out of government at the time. Several months later he returned. He became an MK and foreign minister.

Ben Aryeh was indicted and tried. He copped a plea. He escaped harsh punishment. Justice was denied.

Lieberman is guilty on all charges. "Weinstein hesitations justify neither his conduct nor that of the prosecution," said Haaretz.

"(T)he public issue that cries out for attention is who in the prosecution will be held accountable for its flawed conduct throughout the entire case."

He's charged with inappropriately naming Ben Aryeh ambassador to Latvia. He did so in return for services rendered.

He was Israel's Belarus ambassador at the time. He gave Lieberman unauthorized information.

He did so after Lieberman spurned him. He excluded him from Yisrael Beiteinu's upcoming Knesset list. He retaliated. He heads the Foreign Ministry's appointment process. He knows where the bodies are buried. He provided evidence against Lieberman.

Prior to appointment committee deliberations, Lieberman told Ayalon that Ben Aryeh was "the most fitting candidate and should thus be granted the position."

He withheld vital information at the time. He said nothing about about their personal relationship. Ben Aryeh lost out after background check facts revealed what Lieberman concealed.

Lieberman denies he asked Ayalon to advance Ben Aryeh's appointment. He also denies knowledge of other information pertaining to investigating him earlier.

On December 14, Lieberman resigned as foreign minister and deputy prime minister. He did so weeks before general elections. He retained his Knesset seat. He said he'll quit politics if convicted.

He vowed to clear his name of all charges. Incriminating ones are longstanding. He hopes to resume serving as foreign minister.

Ayalon said he didn't "earn the trust of the international community and therefore should not have a second" chance to do so.

Labor MK Merav Michaeli said reappointing him foreign minister is unethical. Doing so "reeks" from a public policy perspective. All witnesses in his trial are Foreign Ministry employees.

"How could they testify honestly in a trial when they know that the next moment they will be fully given to the mercy of their next boss, the defendant Lieberman?"

"Netanyahu is in effect telling them: 'I suggest you watch your tongues.' That is improper and it makes a mockery of the law," she said.

According to Israeli jurists, political scientists, and others, any Netanyahu-arranged Lieberman deal violates legal and ethical principles.

If convicted of moral turpitude, he'll have to resign immediately.

If sentenced to prison for three months or longer, he's prohibited from seeking a Knesset seat for seven years after completing his sentence.

He's confident of acquittal. Weinstein compromised his integrity earlier. He's got much to answer for.

He wouldn't have brought charges unless confident of conviction. He has to accomplish something this time. What's left of his reputation depends on it.

Critics expressed anger over speculation that Netanyahu serves as foreign minister and prime minister. He reserved the former post for Lieberman, they claim.

Doing so is seen as a prosecutorial no confidence vote. It also perhaps reflects his Yisrael Beiteinu coalition promise.

Israeli law requires disclosing what he did when a new government is formed. Challenging it in High Court may follow.

Lengthy imprisonment is warranted. So is permanent government expulsion. Expect neither. Israeli justice is more than blind. It's dead.