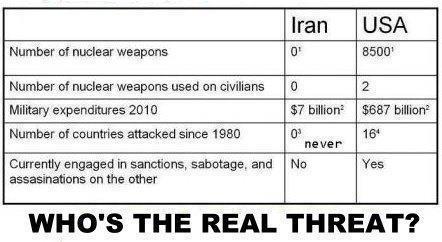 Multiple previous P5+1 talks were held. America manipulated them to fail. So did Israel covertly. Western nations were pressured to go along.

On February 26, new talks will be held in Almaty, Kazahhstan. Expect no more this time than earlier.

It bears repeating. Tehran's nuclear program isn't at issue. It's red herring cover for imperial aims. It's the oil, stupid, and regional dominance.

Iran's sovereignty stands in the way. Its program is peaceful. It complies with NPT provisions. World leaders know it. So do IAEA inspectors.

Washington targets all independent governments. It wants pro-Western puppet ones replacing them. It invents reasons to do so. It operates extrajudicially in defiance of rule of law principles.

It gets UN Secretary-Generals to go along. Ban Ki-moon's one of the worst. He shames the office he holds. He spurns UN Charter principles. He's complicit in war crimes.

He's well rewarded for doing so. He lies for Washington. He's a longstanding imperial tool.

On February 14, the Washington Post headlined "Iran could use UN talks as cover to build bomb, Ban K-moon says."

He knows Iran has no such intention. He lies and claims otherwise. Decisive swift action should prevent what doesn't exist, he urges.

Accelerated action should be prioritized. "We should not give much more time to the Iranians, and we should not waste time," he says. "We have seen what happened with the DPRK."

"It ended up that they (were) secretly, quietly, without any obligations, without any pressure, making progress."

The Security Council must "show a firm, decisive and effective, quick response."

Like America and Israel, he wants Iran to prove a negative. He told Imam Khamenei he's not satisfied with peaceful reassurances. He did so on orders from Washington.

He speaks with forked tongue. He mimics John Kerry. America's new Secretary of State said progress depends on if Iran's ready to "make and discuss real offers and engage in a real dialogue."

Doing so is impossible without legitimate negotiating partners. Iran hasn't had them in decades. It doesn't now.

Iranian UN ambassador Mohammad Khazaei called what he said "unfortunate." He acted "in contradiction to his duties and against international principles."

He called on Ban to observe justice and confidence-building measures. He urged him to use his position responsibly. It's his job to do so. He never once tried. He's complicit in imperial crimes.

He makes unjust accusations. Iran has every right to object. It's entitled to use nuclear power peacefully. Ban knows but won't say. He regurgitates what Washington tells him to say.

America and Israel claim Tehran is months away from producing a bomb. No evidence whatever suggests it. Saying so is malicious propaganda.

He said "(w)e are not going to get trapped into a delay-after-delay process here."

"It is incumbent on the Iranians to prove that they are prepared to meet our willingness, President Obama's willingness, again and again stated by the president, to be open to a diplomatic resolution here."

It's hard imagining why they put up with it so long. Job's patience would be taxed. Tehran prioritizes peace and good relations. It won't stop trying to achieve them. Washington and Israel obstruct them. Rogue states operate that way.

Iranian Foreign Minister Ali Akbar Salehi said Tehran's willing to negotiate directly with Washington. At issue only is "the other side (coming) with authentic intentions."

It hasn't happened in decades and won't now. Salehi knows it. So do other Iranian leaders. On February 16, Fars News Agency headlined "Leader Blasts American Officials' Paradoxical Policies." He referred to their "spirit of bullying."

"Americans expect others to give in to their illogical words and bullying as some have done, but the Iranian nation and the Islamic Republic does not surrender because it has logic, ability and power," Imam Khamenei said.

He stressed key points. They include illogical and contradictory US remarks, using nuclear negotiations to demand Iran surrender its legitimate rights, and lying about removing sanctions through talks.

He called America's offer of direct talks disingenuous. It's cover to bully Iran to surrender.

It's because "they want to show to the revolting Muslim nations of the region that the Islamic Republic of Iran was eventually made to sit to the negotiating table despite all its resistance and toughness, and that they, thus, have no other option but to give up and surrender."

America previously offered direct talks. Iran's "logical words" were spurned. It was blamed for doing so. Expect nothing different now.

At the same time, he said:

"If Americans show both in their words and actions that they are not illogical, then they would see that the Islamic Republic and the Iranian nation are benevolent and favor interaction and logic."

"This is the only way to interact with the Islamic Republic of Iran, and in that case the US administration would receive a proper response."

"Big powers," of course, means Washington. It's offer was duplicitous. It was made to be refused. It demands Iran shut down its newly expanded Fordow enrichment plant.

Reuters cited unnamed Western officials. They spoke on condition of anonymity. They're embarrassed to attach their names to surrender demands. They should have kept silent and said nothing.

They said the new proposal largely replicates earlier ones. "We don't think the Iranians (deserve) much more," they added.

They claim Iran isn't ready to deal ahead of its June 14 presidential elections.

Tehran's ready for legitimate talks anytime. It needs legitimate partners to do so. Washington obstructionism prevents it. It's no different now than earlier.

Pressuring Iran to halt uranium enrichment proves it. Claiming it's for bomb development is false on its face. Knowing it's true but saying otherwise shows what Iran is up against.

Sanctions violate international law. They're imposed to harm Iran's economy, isolate it politically, and cause ordinary Iranians pain and suffering.

It's done to turn them against their government. It's been tried many times before. Every time it fails. Ordinary people blame responsible parties. Their governments are their last line of defense.

Iranians aren't fools. They know Washington and Israel are Tehran's main enemies. They're enemies of peace, equity and justice.

They're hegomonic partners. They violate international law. They spurn it with impunity. They commit crimes of war, against humanity, and genocide. So do complicit NATO partners and rogue regional allies.

At issue is advancing Washington's imperium. It's about regional dominance. It's about controlling world energy supplies. It's about turning Iran into a vassal state.

In 1979, Iran ended 2,500 years of monarchal rule. A generation of Pahlavi repression ended. It's not about to roll over for Washington and return it.

Its sovereignty matters too much. It'll do what's necessary to protect it. Its leaders are responsible for doing it. They've done so for 34 years.

Castro's Cuba alone remained independent longer. Both nations abhor imperial Washington's aims. They do so for good reason. They prioritize peace and good relations, not conflicts and global dominance.

They're targeted for doing the right things. Expect nothing ahead to get easier. Washington has longstanding war plans. It's waging multiple ones already. It has others in mind.

They'll be launched in the fullness of time. Today is the most perilous time in world history. Humanity may not survive America's onslaught.

It's shocking to imagine it's come this far and perhaps no further. If it perishes, it'll be the only species ever to do so.

It'll prove higher intelligence was more liability than asset. Given Washington's rage for dominance, things may turn out that way.

In mid-February, FAIR's (Fairness and Accuracy in Reporting) Peter Hart asked if Iranian magnets are the new aluminum tubes.

Their "diameter, thickness and other technical specifications (had) persuaded American intelligence experts that they were meant for Iraq's nuclear program."

None existed. Most people didn't now. This and other false accusations became pretexts for war. Destroying the cradle of civilization followed.

Henry Kissinger may or may not have said "If you can't hear the drums of war you must be deaf." It's true either way. Permanent war is official US policy.

Current ones rage. More are planned. One country after another is ravaged. It bears repeating. Humanity may not survive Obama's second term. Rogue administration policies make it appear less likely.