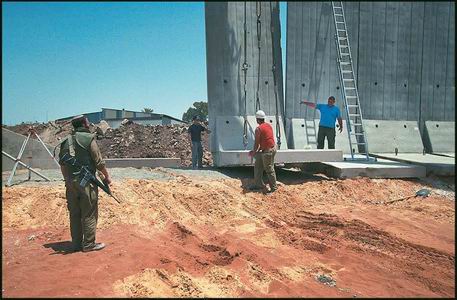 Israel's Racist of the Year Award

Israeli racism is longstanding. It's institutionalized. Imagine honoring it. Israel did so. It finds new ways of reaching new lows. It disgraces itself in the process.

He's "in the money." He got the million dollar Dan David prize. It's from a Tel Aviv University foundation. It's awarded for innovative and interdisciplinary research. It's been done since 2002.

Israeli critics are excluded. Past honorees include Tony Blair and Al Gore. They're war criminals. They deserve prison time, not awards.

Wieseltier's a notorious racist. He supports occupation harshness. He opposes Palestinian liberation. He's against their right to resist. He shames himself for doing so. It doesn't surprise. More on him below.

He turned TNR into a pro-Israeli mouthpiece. He supports its worst crimes. He calls Arabs "violent, fratricidal, unreliable, primitive, crazed and barbarian."

They created a "wretched society." They're "cruel, belligerent, intolerant, (and) fearing." Palestine's "an utter fiction," a "fraudulent nation-state," he claims.

They're "murderous, grotesque, (and) can't even run a post office." Their societies "have gone bonkers over jihad."

They "feign outrage when they protest what they call American (or) Israeli atrocities."

They "behave like lemmings, (and) are not shocked at all by what in truth must seem to them not atrocious at all."

"I can't imagine any venture requiring trust with Arabs turning out especially well. That is, you will say my prejudice, but some prejudices are built on real facts, and history generally proves me right. Go ahead, prove me wrong," he dares.

"Muslim life is cheap, most notably to Muslims. And among those Muslims led by the Imam Rauf (leader of those seeking to create the Muslim religious center near ground zero) there is hardly one who has raised a fuss about the routine and random bloodshed that defines their brotherhood."

"So yes, I wonder whether I need honor these people and pretend that they are worthy of the privileges of the First Amendment which I have in my gut the sense that they will abuse."

Working for Peretz requires accepting his racism. Wieseltier had no problem doing so. His views remain hardline. He's a million dollars richer for them.

Dan David's Prize board called him:

"a foremost writer and thinker who confronts and engages with the central issues of our times, setting the standard for serious cultural discussion in the United States."

His latest column shows why Dan David approves. On February 15, he headlined "Good Fences, Bad Neighbors: Israel and the Palestinians."

He claimed walls make Israel safer. "Since threats encircle Israel, the barriers encircle Israel." They do so for protection, he says. "Their efficacy from the standpoint of security cannot be denied."

He supports Israel's worst crimes. He suppresses information exposing them. He once called TNR "cops" policing beltway discourse on Israel. He features invectives against Israeli critics.

"Orientalism" is one of Edward Said's most important books. Wieseltier called it "little more than the abject canards of Arab propaganda."

He says Palestinians aren't willing "to recognize the historical grandeur of compromise." He "yearns for serious Palestinian diplomacy." He blames them for Israeli crimes.

He defends US imperialism. He belonged to the Committee for the Liberation of Iraq. It prioritized destroying the cradle of civilization.

He's a former Project for the New American Century member. Uber-hawks infested it.

It reinvented itself as the Foreign Policy Initiative (FPI). Policies remain unchanged. Permanent war and imperial dominance are prioritized.

He attends AIPAC conventions. In 2008, he participated on a panel with Michael Oren. In July 2009, Obama appointed him US ambassador to Israel.

He and Wieseltier defended Israeli lawlessness. They defended the indefensible. Their views were shamelessly one-sided.

"The absence of peace does not constitute the failure of Zionism," said Wieseltier.

"I'm one of those Jews for whom Zionism remains a beautiful word."

It's corrosive, destructive, racist, extremist, undemocratic and hateful. It's repugnant, indefensible and malignant. It's contemptuous of fundamental rule of law principles, moral values, and ethical standards.

It espouses violence, not peaceful coexistence. It chooses confrontation over diplomacy. It prioritizes strength through militarism, intimidation, and naked aggression.

Wieseltier criticized Obama for not destroying Syria like Libya. "How can the president dine out on Libya if he is not prepared to do the same for Syria," he asked?

He blames Assad for Washington's crimes. He wants him ousted. He said Obama "should aid and arm the Free Syrian Army." He's doing so generously already.

Earlier he excoriated liberals. He denounced their "wholesale repudiation of Bush's foreign policy, including the rejection of anything resembling his 'freedom agenda.' "

"Whatever one's views of the Iraq war," he added, "it really does not seem too much to ask of American liberals that they think a little less crudely about democratization - not only about its moral significance but also about its strategic significance."

He assails writers critical of Israeli lawlessness. He calls them anti-Semitic. He says waging war on Hamas is just. It "maintains its terrorist and theocratic sway over Gaza," he claims.

It's Palestine's legitimate government. He suppresses uncomfortable truths. He turns them on their head. He's well paid to  do so.

He prioritizes keeping Israel Jewish. Doing so requires denying Arabs all rights. His commentaries stop short of saying of what they imply. They define his racist ideology. His moral bearings are lost. Perhaps he never had them in the first place.