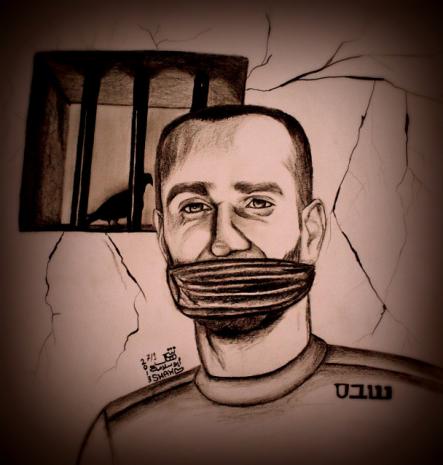 Samer's a Palestinian activist Popular Front for the Liberation of Palestine member. On April 15, 2002, Israel kidnapped him in Ramallah. It did so during multiple community incursions.

He was sentenced to 30 years for supporting right over wrong. He's one of thousands of Palestinian political prisoners. They symbolize longstanding Israeli ruthlessness.

It's official policy. Media scoundrels suppress it. They shame themselves in the process.

In October 2011, Samer was one of hundreds of Palestinians released in exchange for Gilat Shalit. On July 7, 2012, he was rearrested. He was abducted near Hizma village. It's part of Jerusalem's municipality.

It permits detaining Palestinians on false charges. It permits secret evidence unavailable to counsel. It permits rearresting released prisoners for any reason or none at all.

It permits incarcerating them until their sentences are completed. It permits doing so on the slightest pretext. It permits piling on more unjustiable charges.

It permits any damn thing Israel wishes. Palestinians haven't a leg to stand on. Rogue states operate that way.

Five of those rearrested were sentenced to between 24 and 38 years. They'll rot in Israel's gulag unless released.

Samer and four others are hunger striking longterm for justice. Israel doesn't care if they live or die.

Administrative detentions are imposed lawlessly. Those held may be imprisoned indefinitely without charge. They're denied due process. They're not told why they're held.

It applies to children like adults. Israel makes no distinction. Children young as 10, and at times younger, are abusively affected.

Dozens of Palestinians have been affected. No one's safe from Israel's long arm. Pre-dawn arrests occur often. Innocence is no defense.

Article 9 of the International Covenant on Civil and Political Rights states:

1. "Everyone has the right to liberty and security of person. No one shall be subjected to arbitrary arrest or detention. No one shall be deprived of his liberty except on such grounds and in accordance with such procedures as are established by law.

4. Anyone who is deprived of his liberty by arrest or detention shall be entitled to take proceedings before a court, in order that that court may decide without delay on the lawfulness of his detention and order his release if the detention is not lawful."

Although exceptions are permitted "in time of public emergency which threatens the life of the nation," Israel does it abusively. Doing so also violates Fourth Geneva's Article 78, stating:

"If the Occupying Power considers it necessary, for imperative reasons of security, to take measures concerning protected persons, it may, at the most, subject them to assigned residence or to internment."

Israel spurns rule of law principles. It does so with impunity. It gets away with gross human rights abuses. It freely commits murder. Palestinians bear the brunt of its lawlessness. Many hunger strike for justice in response.

Samer's been doing so for over 200 days. Ayman Sharawna intermittently stopped eating since August 1, 2012. In October 2011, he was released. In January 2012, he was rearrested.

Yousef Abdel Rahman Eshteiwi was mistreated the same way. Israel justified his rearrest and imprisonment. It did so based on secret evidence. His lawyer can't defend him. He's unaware of what it is. He can't contest.

Numerous other Palestinians are denied justice the same way. Israel wants them in gulag hell longterm.

"There is no going back because I'm the owner of Right."

"I turn with admiration to the masses of our heroic Palestinian people, to our Palestinian leadership, to all forces, parties and national institutions. I salute them for standing by our fight to defend our right to freedom and dignity."

"I draw my strength from my people, from all the free people in the world, from friends and the families of the prisoners who continue day and night chanting for freedom and an end to the occupation."

"My health has deteriorated dramatically and I'm hung between life and death. My weak body is collapsing but still able to be patient and continue the confrontation."

"My message is that I will continue until the end, until the last drop of water in my body, until martyrdom. Martyrdom is an honor for me in this battle."

"My martyrdom is my remaining bomb in the confrontation with the tyrants and the jailers, in the face of the racist policy of the occupation that humiliates our people and exercises against us all means of oppression and repression."

"I say to my people: I'm stronger than the occupation army and its racist laws."

"I, Samer al-Eesawi, son of Jerusalem, send you my last will that, in case I fell as a martyr, you will carry my soul as a cry for all the prisoners, man and women, cry for freedom, emancipation and salvation from the nightmare of prisons and their harsh darkness."

"My battle is not only for individual freedom. The battle waged by me and by my heroic colleagues, Tariq (Qa'adan), Ayman (Sharawneh) and Ja'affar (Ezzedine), is everyone's battle, the battle of the Palestinian people against the occupation and its prisons."

"Our goal is to be free and sovereign in our liberated state and in our blessed Jerusalem."

"The weak and strained beats of my heart derive their steadfastness from you, the great people."

"My eyes, which started to lose their sight, draws light from your solidarity and your support of me."

"My weak voice takes its strength from your voice that is louder than the warden's voice and higher than the walls."

"I'm one of your sons, among thousands of your sons who are prisoners, still languishing and steadfast in the prisons, waiting for an end to be brought to their plight, their pains and the suffering of their families."

"The doctors told me I became exposed to stroke because of the disorder of my heartbeats, the shortage of sugar and the drop in blood pressure."

"My body is full of cold and I can't sleep because of the continued pain."

"But despite the extreme fatigue and chronic headaches, as I move on my chair, I'm trying to summon all my resources to continue on the road till its end."

"There is no going back, only in my victory, because I'm the owner of Right and my detention is invalid and illegal."

"I am still alive now and tomorrow and after death, because Jerusalem is moving in my blood, in my devotion and my faith."

On February 19, Samer appeared in Jerusalem civil court. He was gaunt and wheelchair-bound. His lawyer petitioned for his release on bail. He needs emergency medical treatment.

Israeli judicial unfairness rejected him twice before. It did so again. His mother collapsed after the ruling. It condemned him to death.

Hundreds rallied outside Ofer Prison. Samer's held there. Soldiers attacked them with tear gas and rubber bullets. At least 18 were injured.

In recent days, thousands of Palestinians rallied across the West Bank and Gaza. They demand all uncharged prisoners be released.

They attracted world attention. Human rights activists supported them. They support current hunger strikers. They're heroic. Some perhaps head for martyrdom. They're doing so for a just cause.