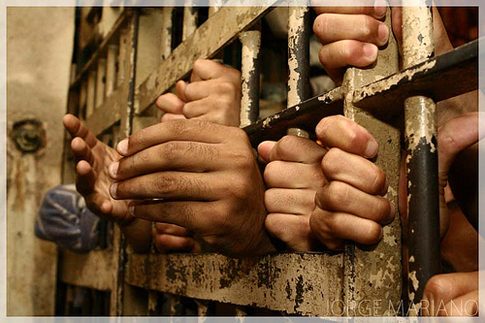 Police states govern this way. Israel's one of the worst. Racism is institutionalized. Arabs have no rights. They're considered subhumans. They're viciously persecuted.

Israel holds them in 17 prisons and four interrogation centers. Four others are for shorter-term detentions. All but one are in Israel. Sending Palestinians there violates Fourth Geneva's Article 76. It states:

"Protected persons accused of offenses shall be detained in the occupied country, and if convicted they shall serve their sentences therein."

Israel spurns all international laws and norms. It does so with impunity. Palestinian prisoners suffer most.

Peacefully demonstrating is considered disrupting public order. Associating with a member of an illegal group is called supporting terrorism.

• the Order Regarding Administrative Detention;

• the Emergency Powers Law for Israel; and

• the Internment of Unlawful Combatants Law.

Commanders have discretionary authority. They may order anyone detained they say threatens public security with or without evidence. Their word is law.

Judicial fairness is absent. Military judges cook the books. Whatever commanders want, they approve. Children are as vulnerable as adults. Israel reflects the worst of police state harshness.

"Changes in military law allow IDF and Shin Bet to rearrest any released prisoner until the end of his or her original sentence, on the slightest pretext, and often relying on secret evidence."

Two are uncharged administrative detainees. The others were part of the Shalit deal.

They include belonging to legitimate political parties, demonstrating peacefully, choosing associates freely, and praying to the God of their choice.

Release terms for prisoners swapped for Shalit included "the condition that they not return to prohibited security activities."

Pardons may be revoked "due to conviction of another offense during the period of parole, or through an administrative committee authorized to examine intelligence information with only one side present to attest to the violation of the conditions."

During supportive hunger striker demonstrations, Palestinians urged Israeli soldier abductions. It's the only way to force Israel to treat its prisoners as POWs, not incarcerated criminals, they believe.

Those doing so ignore one thing. They don't understand Israel's "determination (to) thwart future deals." It does whatever it wishes. It's part of enforcing occupation harshness.

They're guilty because Israel says so. Released prisoners are vulnerable to rearrest any time. It can be for any reason or none at all. Israeli agreements aren't worth the paper they're written on. Rogue states operate that way.

Palestinians know what they're up against. Israel persecutes them ruthlessly. There's "no point wasting time on peace negotiations or searching for a historic compromise," says Hass. Achieving liberation demands other ways.

"There is no measure of justice or reason in jailing a man for years because he visited an adjacent neighborhood or even assumed political activity."

Draconian harshness is unjustifiable. Slight pretexts permit it. Israel invents them when they don't exist. Palestinian victims pay dearly. Guilt by accusation is policy. Palestinians haven't a leg to stand on.

Evidence against them is secret. Hearsay qualifies. So does stuff made up. When no evidence exists, it's invented. Counsel can't contest what it doesn't know. Police state harshness is unconscionable.

"This revolving door system is not only inhuman in itself, it also undermines the agreements Israel signed and will make future deals much harder to achieve," said Haaretz.

Dozens of Palestinians have been affected. No one's safe from Israel's long arm. Pre-dawn arrests occur often. Innocence is no defense.

"Everyone has the right to liberty and security of person. No one shall be subjected to arbitrary arrest or detention."

"Anyone who is arrested shall be informed, at the time of arrest, of the reasons for his arrest and shall be promptly informed of any charges against him."

Everyone deprived of liberty by arrest or detention is entitled to judicial fairness. Israel provides none.

Administrative detention never substitutes for doing the right thing. It's permitted only to prevent lawless acts.

Even if Israel acted legally, said Haaretz, draconian sentences "reek of cruelty and abuse. There is no measure of justice or reason in jailing a man for minor offenses."

"If none of the Palestinians committed any terrorist activities, Israel should free them immediately." They never should have been arrested in the first place. Rearrests shouldn't have followed.

Israel does it abusively. It's official policy. It's unconscionable. Israel's High Court should reverse it. What's lawless for Jews should be so for Arabs. Fairness demands no less. So does inviolable international law.