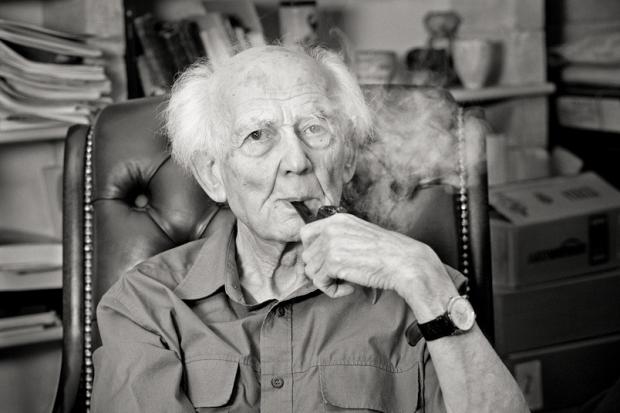 His wide-ranging interests include consumerism, globalization, ethics, power, the status of workers, intellectuals in society, and nature of modern relationships.

He distinguishes between earlier modernity forms ("solid modernity") and what's commonplace today. It's characterized by fragile social relations, he believes. They're created and broken by neoliberal harshness.

His metaphorical use of "liquidity" captures the shifting character of individualized/globalized lives. His new book is titled "Culture in a Liquid Modern World."

Among other topics it discusses culture in a globalized world and what's happening in today's Europe. He describes utopia's end. In recent decades it's been privatized.

It once meant imagining well-designed societies. They guaranteed meaningful, dignified, gratifying lives. Today's world is inhospitable. It's beyond redemption, he believes.

In May 2012, he discussed today's Europe. After decades of rising expectations, he said, "present-day newcomers to adult life confront" them falling. "Individualized utopia coincides with the collapse and demise of the idea and hope for a 'good society.' "

It's happening "much too steeply and abruptly for any hope of a gentle and safe decent," he added.

Today's youth face "long-term unemployment and long stretches of 'rubbish jobs.' " They're "well below their skills and expectations."

"This is the first postwar generation facing the prospect of downward mobility."

Nothing prepared them for today's reality. Hopes are frustrated and stillborn. University degrees once "promised plum jobs." No longer. Once attainable dreams go unfulfilled.

What's true of Europe applies to Israel and much more. Bauman had his say. Haaretz discussed him.

He has family in Israel. He once lived there. He was briefly a citizen. He taught at Tel Aviv University and the University of Haifa. Since then, he said, Israelis "expressed their approval of high-handedness over high-mindedness."

They "vot(ed) into power people who made sure that peaceful Israeli-Palestinian coexistence is not in the cards."

He last visited 20 years ago. He'll return briefly. He accepted an invitation from the Ruppin Academic Center (RAC) and Israel Sociological Society (ISS).

On February 18, he addressed ISS' annual conference. He discussed inequality in Israel. More on that below.

Sociologist Yehouda Shenhav said he wants "to return sociology to morality and morality to sociology." He "seeks the moral and political sociologist."

He's a "sociologist who does not frequent the corridors of power, who critiques war as immoral, who is not infected by the nationalist militancy that pervades his country, and who assails the disintegration of the welfare state, xenophobia, and the instrumentalization of the social discourse."

"One of the widely used moral justifications for free-market economics is that the pursuit of individual profits also provides the best mechanism for the pursuit of common good," he said.

"This has, however, been cast in doubt and all but belied by a rising tide of research findings and official statistics documenting the fast-growing distance that separates those at the top from those at the bottom of the social hierarchy."

"In jarring opposition to political pronouncements intended to be recycled into popular belief, the wealth amassed at the top of society has blatantly failed to 'trickle down' and make the rest of us richer, make us feel more secure and more optimistic about our and our children's future, or make us happier."

"Nowadays, inequality continues to increase by its own logic and momentum. It needs no more help or kick from outside - no outside stimuli, pressures or blows."

"Social inequality seems ever closer to becoming the first perpetuum mobile, which after innumerable failed attempts humans have finally managed to invent and set in motion."

Israel mirrors the worst of Western societies. It's one of the most unequal OECD countries. Its privileged do extraordinarily well. Most others fall far behind. The gap between rich and poor expands exponentially.

"The number of people living below the poverty line rose rapidly - including among working people, whose wages stagnated or declined as pensions, unemployment benefits and income protection schemes, meant to defend them against falling into poverty, were all severely cut," said Bauman.

In 1971, he left Israel. He did so disillusioned and disappointed. He criticized Israel's conquest of Arab territories.

Before her death, his wife Janina called Israel a "nationalist country. We had just run away from nationalism," she said. "We didn't want to go from being victims of one nationalism to being perpetrators of another."

Bauman decries how Israel exploits the holocaust. It does so for political reasons. Jewish suffering isn't unique. Calling it special belittles many other human tragedies. Some far exceed what Jews endured.

Bauman compared Israel's Separation Wall to how Nazi Germany ghettoized Warsaw. He did so in the context of separating one population from another.

He called building the Wall "Hitler's posthumous triumph." It's trying to accomplish what he failed to achieve - "to set Jews and the rest of the world at loggerheads and make their peaceful coexistence all but inconceivable or impossible."

"In our collective unconscious, the image of a wall is established as the archetype of exclusion, break of communication, degradation, denial of human rights."

"Were that not the case, it is doubtful whether the idea of building a wall around Israel and its settlements on the occupied land would occur to Israeli leaders as the means to deal with a vicinity of undesirables, and become an ultimate symbol of unilateral but irrevocable separation and refusal to communicate."

"The higher and tighter the wall, the slimmer the chance of talking to each other, empathizing with each other's pains and sufferings, and coming to terms with each other - let alone working toward a mutually agreeable and beneficial mode of coexistence."

Bauman today feels much like he did decades earlier. Israel goes out of its way to spurn peace. Protracted occupation morally denigrates the occupier.

"It pains me, pains me tremendously, to watch the forgetting and abandoning of our collective mission and duty, imposed upon us by the tragic Jewish history: the duty to alert the world - lest it forget - to the evil endemic in all and any nationalist hatred, and to be in the forefront of the ongoing fight against its breeding."

"And of the ambition of the founders of Israel to serve as 'a light unto the nations.' " It never was and isn't now.

Bauman spoke out earlier on the holocaust, Zionism, and Israeli belligerence. Its leaders prioritize conflict, not peace, he said. They manipulate holocaust memories to justify occupation harshness.

They do unto others what they deplore having been done to them.

Bauman is a holocaust survivor. He escaped Nazi-occupied Poland. He managed to get into Soviet Russia's sector. He was forced out of Eastern Europe during Poland's 1968 anti-Semitic purges.

He calls today's Israel a "belligerently intolerant, faith-driven ethno-state." Peace is a non-starter. Advancing it never existed and doesn't now. "It did not die. It was killed." It was done so from inception.

Occupation harshness is "toxic" and "corrosive," he says. It corrupts the "ethics and moral scruples of the occupiers." Challenging fortress Israel is considered "criminal and treason."

War and readiness for it erode democratic freedoms. Israeli leaders fear peace. Without conflicts they "don't know how to govern." They exploit holocaust memories as "a get-out-jail card for their own depravity and absolution of their sins."

They do so for ones they've "already committed and (others) they are going to commit."

Bauman's "radically opposite way of 'commemorating' the holocaust can be summarized as follows: It is forbidden to stay silent in the face of Israeli crimes and their persecution of Palestinians exactly because the fate of Jews in Europe had similar beginnings -  discrimination, pogroms, ghettoes, concluding with the Shoah."

Holocaust survivors have a mission, he added. They're obligated "to prevent another disgracing of civilization."

Israeli leaders threaten one. It's ongoing in slow motion. "Hurting people debases and morally destroys those who are doing" it.

It initiates a process anthropologist Gregory Bateson called "schizmogenesis." It's a "sequence of action and reaction where each consecutive behavior" exaggerates another. Doing so causes "ever more deepening schism."

Israel's been shooting itself in the foot for decades. What can't go on forever won't. Bauman is one of many Jewish intellectuals speaking candidly on today's Israel.

He wants views he considers vital heard and understood. He was invited to Israel to express them. Advanced age didn't silence him. In November, he'll be 88.