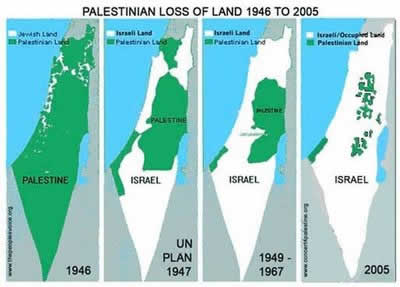 They violate international law. They prioritize land theft. They prevent peace. On January 31, the UN International Fact-Finding Mission on Israeli Settlements in the Occupied Palestinian Territory  condemned them for good reason.

They deny Palestinian self-determination. They comprise "part of an overall pattern of (Israeli) breaches."

The UN Mission wants them halted without preconditions. It called for "immediately initiat(ing) a process of withdrawal of all settlers from the OPT."

It wants companies and governments to "assess the human rights impact of their activities."

It wants them to "cease all connections to settlements." It wants decades of Israeli lawlessness ended.

The David Project (DP) "shapes campus opinion on Israel by educating, training, and empowering student leaders to be thoughtful, strategic and persuasive advocates."

They do so for what they should condemn. Their programs operate in more than 130 Jewish high schools and middle schools.

David Bernstein is executive director. "We have moved from a more frontal approach to advocacy to a more relational" one, he said.

"We believe relationships make the world go round."

"We educate and empower students in both the content and the skills necessary to form a robust network of relationships on campus, and teach and guide them in leveraging those relationships to raise understanding and support for Israel."

"We also have moved from addressing problems wherever they appear (there are 4000 institutions of higher learning in this country alone!) to a more focused approach in which we pick our spots carefully, knowing that to be all things to all people means that you are not going to be very effective at any one place."

Its "Understanding The Settlements: A Primer" addresses the growing controversy. It goes "beyond headlines and sound bites," it claims.

It tries putting lipstick on a pig. Doing so reflects Israeli vulnerability.

It's as simple as knowing right from wrong. International law is clear and unequivocal.

Israel built illegally for decades. Around 600,000 settlers occupy over half the West Bank and parts of East Jerusalem.

"Settlements are often described as monolithic, and reporters fail to note the unique histories, populations and economics of each community, as well as their distinct political ramifications."

"Speaking in a more simplistic manner and relying on stereotypes of a complicated issue such as settlements is a disservice to students and the public."

Setting the record straight demands not distorting it.

"Settlements are not homogenous, they are diverse, and we should understand how they impact Israel and Palestinians," he added.

At issue is inviolable international law, not diversity, homogeneity, or other unrelated issues.

DP tries with its primer. It reviews settlement history and geography. It avoids inflammatory language. It shuns sweeping generalizations.

It tries doing the impossible. It represents Israel's point of view. At the same time, it discusses reality. It concludes saying settlements aren't monolithic.

They can't be painted with a broad brush. More learning and "meaningful conversations" are needed.

Liberating Palestine matters most. So does government treating all its people equitably and fairly. DP needs reeducation help.

Israel fell short from inception. It was born in blood. Growing millions know. It's a rogue terror state. It's amoral, brutish, and ruthless.

It deplores peace and stability. It lives by the sword. It's a modern-day Sparta. It threatens the region and humanity. It's leaders are war criminals.

They bear full responsibility for decades of lawlessness. State terror is official policy. Arabs are murdered for not being Jews.

Settlement policy is one of many Israeli Achilles heels. Justifying them doesn't wash. Those trying support wrong over right. Doing so makes them look foolish.

Hasbara is an Israeli euphemism for propaganda. It covers up inconvenient truths. It picks and choses selected versions. Practitioners believe their arguments hold water. They're convinced their way is right.

Hasbara is a leap of faith. It's official Israeli policy. It turns truth on its head. It tries framing the unjustifiable to wash. It tries convincing people to believe it. It attacks naysayers. It doesn't work as planned. Israel proliferates it anyway.

He doesn't let inconvenient facts change his version of truth. It's reason enough for him to be prime minister.

He claims settlements don't prevent Palestinian self-determination. It's "simply not true," he says.

He did so late last year while doubling Israel's budget for expanding them. Finance Minister Yuval Steinitz confirmed it. He ought to know.

He manages state revenues. He prepares and monitors implementation of Israel's economic and financial policies. He accounts for every shekel spent.

He said settlement budgeting doubled quietly. It was done to prevent "elements in Israel and abroad" from impeding them.

At stake is stealing all parts of Judea and Samaria Israel wants. Netanyahu and likeminded extremists prioritize doing it.

In 2005, 16 Gaza settlements were dismantled as part of Israel's disengagement plan. Residents were shifted to other settlement locations.

Occupied Palestine reflects colonization and discriminatory apartheid. It's worse than what South Africa experienced. Separate and unequal is policy.

Civil law governs settlers. Military orders deprive Palestinians of fundamental rights. They have no control over their daily lives. Their land is systematically stolen.

They're denied free expression and movement. Their homes are bulldozed and destroyed. They're uprooted and displaced.

They're forbidden from returning to land once theirs. They're denied redress. West Bank reconfiguration plans intend to isolate them in ghettoized bantustans. Sovereign viability is impossible.

Two states once were possible. No longer. Israel controls over half the West Bank. It has much of East Jerusalem. More is added daily. When completed, Israel's apartheid wall will control over 10% of Palestine.

One state comprised of Israel and Occupied Palestine alone works now. Nothing else is viable.