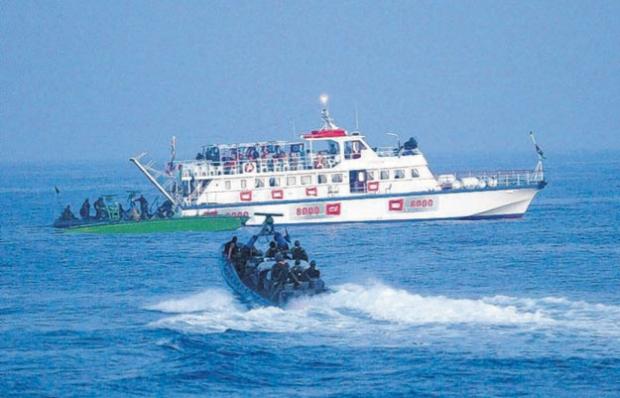 Why not. It whitewashes its own. Washington is a rogue terror state. So is Israel. It denigrates non-Jews. It's waged war on Palestine for decades. It's guilty of high crimes and misdemeanors. Its rap sheet makes serial killers look saintly.

On May 31, 2010, Israeli commandos committed premeditated murder. They killed nine humanitarian activists. They did so in cold blood. They executed them in international waters. Doing so also constituted piracy.

Eighteen-year old Turkish-American Furkan Dogan was on board. Israel marked him for death. A UN Human Rights Council (HRC) investigation determined that he and eight other Turkish nationals were murdered in cold blood.

Israeli commandos did it execution-style. They did so "at point blank range," it said. He was "lying on the deck in a conscious or semi-conscious state for some time."

He was shot in the face. His body was riddled with bullets. The autopsy report was damning. Weeks later, Turkey gave it to the US embassy. It went to the Justice Department. It was done to decide if an investigation was warranted. Whitewash followed.

A State Department official spoke on condition of anonymity, saying:

HRC's "tone and conclusions (were) unbalanced. We urge that this report not be used for actions that could disrupt direct negotiations between Israel and Palestine that are now underway or actions that would make it not possible for Israel and Turkey to move beyond the recent strains in their traditional strong relationship."

In mid-June, White House Press Secretary Robert Gibbs said Israel  "should be allowed to undertake an investigation into events that involve its national security."

Its military justice system "meets international standards and is capable of conducting a serious and credible investigation."

On May 24, 2011, the Center for Constitutional Rights (CCR) filed a FOIA lawsuit.

It sought "immediate release of documents that the United States government has refused to provide regarding its knowledge of and role in the deadly May 31, 2010 attack by Israeli commandos on a Gaza-bound aid flotilla."

"One year after the deadly attack on the humanitarian flotilla, the American public has been told nothing about what actions, if any, the United States undertook to ensure that US citizens and other civilians were protected when they sailed towards Gaza."

"A US citizen was killed and the US has not conducted an independent investigation into his killing in international waters by a foreign military."

"Indeed, the State Department did not even mention the killing of Furkan Dogan in its recently released Human Rights report on Israel."

"We need to know what our government is doing to protect us - and hold those to account who harm US citizens."

Israel's blockade "cannot be reconciled with principles of international law."

"Regardless of how one determines Israel's legal obligations with respect to Gaza, civilians have the right to receive food and medical supplies."

"And United States citizens who participate in non-violent humanitarian missions have the right to know what protections they can expect their government to provide in international waters."

"On May 31, 2010, a six-boat flotilla, carrying more than 700 civilians from almost 40 countries seeking to bring humanitarian and rebuilding supplies to the Gaza Strip as well as to break the Israeli blockade of Gaza, was overtaken by Israeli commandos in international waters."

"Nine passengers were killed, including one Turkish-American citizen."

"The underlying blockade and the attack on the Gaza Freedom Flotilla both constitute serious violations of international law."

"Through advocacy, legal analysis and educational materials, and Freedom of Information Act requests, CCR is seeking information regarding these breaches of international law, answers about the US role in and knowledge of the attack and its position vis-à-vis the continued blockade, and an end to the illegal policies and practices that result in the 'collective punishment' of the people of Gaza and attacks on civilians seeking to assist Palestinians in Gaza."

Furkan and 15 other US citizens were on board. Many were beaten and injured. Pathology Professor Ahmet Dogan is Ferkan's father. He seeks justice, saying:

"Furkan was an American citizen of Turkish origin, and the American government hasn't done anything for him."

"I want the United States to demand justice for its citizen, and support decisions related to this (injustice) at the UN."

"We are very disappointed by the way the US has handled the events until now, because in theory the US is supposed to view all of its citizens equally."

"What if this was Barack Obama or Hillary Clinton's child? Would there be an American investigation into the matter?"

"As far as they are concerned, their ties with Israel are more important than my son, and he was an American citizen."

"If my son was an Israeli who was shot by Turks in international waters, how would the US react? That is what I would like to ask the Americans."

Dogan condemned Israel's internal investigation. It "was full of lies," he said. "It pandered to the Israeli and American publics."

Furkan just finished high school. He was "granted a place at the medical school of a prestigious university. Why was such a young, successful boy killed by Israeli soldiers in the middle of the night?"

"When he applied to go on the Mavi Marmara, he asked me for permission. It was a very difficult moment for me."

"But we let him go because he cared and wanted to help. He was a very moral boy. I think that no parent could say no to such a request."

"Besides….we did not expect Israelis to attack the ship….We thought (at worst they'd intern it at) Ashdod, and because my son was an American citizen and there is a close relationship between Israel and the US, they would not do anything to him."

"He had big plans. He was very ambitious…How would you feel if it happened to your son?"

Dogan "want(s) those responsible….to face justice." Nothing less is acceptable. So far it's been denied.

Emails between US officials in Istanbul and Washington were exchanged. Ankara's US Consul General Richard Appleton confirmed America's knowledge of Furkan's death.

"Here is what we know," he said. "Turkish-American Furkan DOGAN DOB 20OCT91 was one of the killed in the Gaza Flotilla event."

In a separate email he said "his family had been calling at least twice a day for several days….Before we contact we are going to get confirmation thru" Israel's Foreign Ministry.

These and other emails confirmed Washington's complicity with Israel. America abandoned one of its own. It's longstanding policy. Israel matters more. Its worst crimes are supported and financed.

In February, CCR headlined "Gaza Flotilla FOIA Production Guide: the US Passengers." It discusses FOIA documents. It includes emails between Appleton and Washington.

Other information revealed FBI involvement. Counterterrorism agents investigated 561 flotilla participants. Details were largely redacted. So was other material throughout the report.

Co-counsel Lee said those related to Furkan "reveal that the US has an unquestioning deference to" Israel. It's true "even when the life of an American teenager is at stake."

Pettit told Dorgan that Washington wouldn't investigate Furkan's death. "As a rule," he said, America doesn't do so for its citizens overseas.

She visited Israel's morgue. CCR said "instead of viewing the bodies of the deceased passengers, she was shown what she was told were photos of nine men killed during the attack, which were frontal photos from the shoulders up."

"None of photos of the deceased showed evidence of bullet wounds, damage, or distortion, except for bruises and hematomas."

At America's Tel Aviv embassy, she viewed Furkan's photo. She saw no one in Israel's morgue resembling him. Israeli officials tried suppressing his murder.

CCR said: "As of February 2013, property belonging to the US passengers aboard the 2010 Gaza flotilla remains missing, presumably within Israeli custody."

Washington did nothing to get it returned. Failure provides more evidence of complicity and coverup. Justice remains denied.