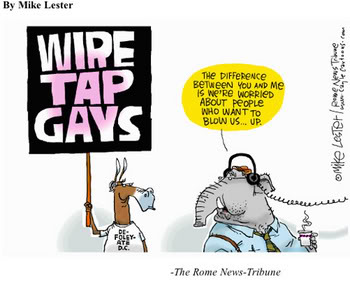 FS began 30 years ago at Harvard, Yale and University of Chicago law schools. Initially it was a student organization. It challenges orthodox liberalism. It corrupts itself in the process.

It's lawless without legitimacy. It extends the 2008 FISA Amendments Act (FAA). It's for another five years.

It authorizes warrantless spying. It does so without naming names or probable cause. It violates Fourth Amendment protections. It states:

"The right of the people to be secure in their persons, houses, papers, and effects, against unreasonable searches and seizures, shall not be violated, and no warrants shall issue, but upon probable cause, supported by oath or affirmation, and particularly describing the place to be searched, and the persons or things to be seized."

Overseas phone calls, emails, and other communications of US citizens and permanent residents may be monitored without court authorization. Perhaps domestic ones are covertly. Anything goes is policy.

Probable cause isn't needed. Warrantless electronic eavesdropping is instrusive and lawless. Everyone is vulnerable for any reason or none at all. Vague language allows virtually anything.

Constitutional protections don't matter. They're null and void. What Bush began, Obama embraces. Things are worse than ever. Full-blown tyranny remains a hair's breath away. Obama governs by diktat authority.

On February 26, the Supreme Court ruled. It dismissed ACLU's case. It violated constitutional protections doing so. It wasn't the first time inviolable law was spurned.

On February 27, the Electronic Frontier Foundation (EFF) commented. The Court didn't address FFA's constitutionality, it said. It ruled against lawyers, journalists, human rights groups, and others challenging protections too important to deny.

It said they couldn't prove surveillance was "certainly impending." They didn't have required standing to sue.

Saying so is deeply troubling. It's an absurdity on its face. It's a standard never before used. Imposing it denies the legitimate right to sue. Doing so reflects police state justice.

"In other words," said EFF, "since (plaintiffs) did not have definitive proof" of what Washington keeps secret, "they cannot challenge" the law's constitutionality.

EFF challenged responsible government officials. They include George Bush, Dick Cheney, Alberto Gonzales, and others. They ordered and participated in warrantless domestic surveillance. Obama and other administration officials do it now.

In 2009, his administration moved for dismissal. It claimed permitting it would require revealing "state secrets."

It's "one of the last remaining hopes for a court ruling on the legality of" lawlessly surveilling Americans, said EFF. It's been ongoing for over a decade.

"Jewel has much stronger allegations of concrete and particularized injury than did the plaintiffs in Amnesty International. Whereas they anticipated or projected future government conduct, Jewel's complaint alleges past incidents of actual government interception of her electronic communications."

Major hurdles remain to be overcome. The Supreme Court ruled future harm must be "certainly impending." It's required to sue, they said. It obstructs future lawsuits.

It's "very troubling," said EFF. It's especially so "in the context of cases involving secret surveillance."

Future conduct can't be predicted. Ruling so denies all challenges. None can be settled equitably. Anything can be claimed for any reason to deny them.

"One can, of course, always imagine some special circumstance that negates a virtual likelihood, no matter how strong."

"But the same is true about most, if not all, ordinary inferences about future events."

"Perhaps, despite pouring rain, the streets will remain dry (due to the presence of a special chemical)."

"More than a decade after 9/11, we still have no judicial ruling on the lawfulness of torture, of extraordinary rendition, of targeted killings or of the warrantless wiretapping program."

Secret lawless surveillance alone is troubling. It differs from physical searches. It's hidden. Targets don't know they're spied on or why. Innocent people suffer. Constitutional protections are denied.

Reasons for doing so don't wash. According to Supreme CourtThink, Washington can deny victims standing.

FAA permits sweeping surveillance. Categories of people can be targeted. Millions are affected at the same time. No one know's what's going on or why.

In Al Haramain Islamic Foundation v. Obama (August 2012), they dismissed plaintiff's challenge. They did so on what's called "sovereign immunity."

It prevents government, its agencies and departments from being sued without consent. It stems from earlier practice. It comes from notions that monarchs can do no wrong. It violates fundamental freedoms doing so.

EFF hopes Al Haramain won't affect Jewel. It raises "many causes of action." They embrace more than what 50 USC, Section 1810 covers. It's US law explaining actual and punitive monetary damages.

It said "FISA preempts the state secret privilege." District court hearings will begin this fall. Whether High Court ones follow won't be known for some time. How they rule most often remains deeply troubling.