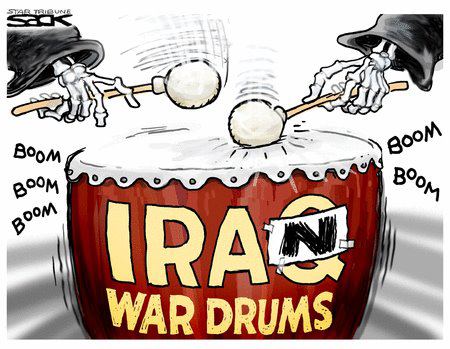 Permanent war is official US policy. Bipartisan complicity supports it. Doing so violates international, constitutional and US statute laws.

America is a lawless rogue state. It's been so for decades. It's by far the world's worst. It wages war on humanity. It does it at home and abroad.

Innocent victims are murdered in cold blood. It's official policy. So are other high crimes.

It's an unregistered foreign agent. It's represented Israel since 1953. It does so lawlessly.

Virtually no one in Congress confronts it. Doing so assures short careers. It has enormous influence over US Middle East policies. They affect Israel, war, peace, and humanity.

It disseminates disinformation, lies and hate. It viciously attacks opponents. It's a cancer in our midst. It destroys fundamental freedoms.

It maliciously calls Iran "the world's leading state sponsor of terrorism and is racing toward a nuclear weapons capability."

It manufactures threats to promote fear. It wants the Islamic Republic destroyed. It targets other regional states. It wants unchallenged Israeli regional dominance.

Its annual conferences reflect out-of-control Zionist influence over US foreign policy. It calls them "the largest gathering of the pro-Israel movement."

A rogue's gallery of participants show up. They express fealty to what demands condemnation.

AIPAC's 2013 conference will be held from March 3 - 5. Washington again is venue. AIPAC calls it "three of the most important days affecting Israel's future." Its theme is "Shaping Tomorrow Together."

Thousands are expected to attend. Doing so shames anyone showing up. Caterpillar will participate in a panel discussion. It topic is "Foreign Aid: The Vital Role of US Assistance."

It's scheduled days before the tenth anniversary of Rachel Corrie's murder. One of its giant bulldozers crushed her to death. It did so in cold blood.

A soldier/operator ran her down twice. He did so to be sure she was dead. Caterpillar shares guilt. It supplies giant bulldozers. They're designed to destroy and kill.

Its Washington Director for Government Affairs, Bill Lane, will pay homage to AIPAC and Israel. It's no surprise.

Occupy AIPAC will be back. CODEPINK, Interfaith Peace Builders, US Campaign to End the Israeli Occupation, the Fellowship of Reconciliation, and other groups will participate.

Demonstrations and other events are planned. Instituting a new US Middle East policy will be stressed. So will ridding the region of Israeli lawlessness and AIPAC's sinister influence on Washington.

They prepared a joint resolution. It "strongly supports the full implementation of United States and international sanctions on Iran and urge(s) the President to continue to strengthen enforcement of sanctions legislation."

It falsely calls Iran "in non-compliance with its safeguards agreement with the IAEA." It lied claiming its uranium enrichment is illegal.

It did so again saying it "stands in violation of the Universal Declaration of Human Rights."

They're not fools. They blame Washington and Israel. They're Tehran's main enemies. They're partnered in seeking Middle East dominance. They commit crimes of war, against humanity, and genocide.

They're waging lawless war on Syria. The road to Tehran runs through Damascus. Their government is their last line of defense. They support it for good reason.

In December 2012, 74 senators urged Obama "to take military action against Iran if it continues its efforts to acquire a nuclear weapon."

They want Washington's European and Middle East partners involved. They want "a credible and capable multilateral coalition" demonstrated. They want a strike commitment ready if necessary.

They support strong military ties to Israel. They back its right to self-defense. Israel has no regional enemies except ones it invents. Claiming otherwise is fabricated rubbish.

"….(I)f the government Israel is compelled to take military action in self-defense, the United States Government should stand with Israel and provide diplomatic, military, and economic support to the Government of Israel in its defense of its territory, people, and existence."

Nothing happened. Graham/Menendez's resolution exceeds last year's. It backs an Israeli strike. It's bipartisan. It's non-binding.

It toughens economic sanctions. It increases oversight over current ones. It states US policy prioritizes preventing Tehran from acquiring a nuclear weapons capability.

It falsely calls Iran's Islamic Revolutionary Guards Corps (IRGC) a Foreign Terrorist Organization (FTO). It's other provisions turn truth on its head. It's coupled with Graham/Menendez.

It gives pause to what Obama/Netanyahu have in mind. They'll meet later in Israel. March is scheduled. It's flexible. Expect plans to be finalized once Israel's new government is formed.

He said "no Israeli government can tolerate a nuclear weapon in the hands of a regime that….threatens to wipe Israel off the map and sponsors terrorist groups committed to Israel's destruction."

He lied. Iran seeks peace. It threatens no one. Obama knows it. So does Israel. False accusations follow often. He told AIPAC participants he'll "use force when the time and circumstances demand it."

"I will take no options off the table, and I mean what I say. That includes all elements of American power (including) a military effort to be prepared for any contingency."

"Iran's leaders should understand that I do not have a policy of containment. I have a policy to prevent Iran from obtaining a nuclear weapon."

"And as I have made clear time and again during the course of my presidency, I will not hesitate to use force when it is necessary to defend the United States and its interests."

For the first in seven years, no US president or Israeli prime minister will attend AIPAC's conference. Why they'll have to explain.

It wants status beyond what's offered other nations. It wants America agreeing to strike Iran. If binding legislation authorizes it, all bets are off. What follows bears watching.