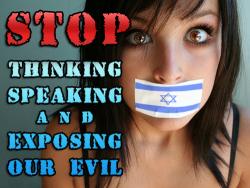 Israel targets anti-war dissent. Demonstrators are beaten and arrested. So are journalists and activists. Arabs are vulnerable. So are Jews.

Courts also silence criticism. The Association for Civil Rights in Israel (ACRI) said so. Its new report is titled "The Silencer: Libel Litigation as a Threat to Free Speech."

Whether defamation occurred isn't important, said ACRI. Nor is compensation sought. At issue is silencing criticism. ACRI's report explains. Its effect on free expression is chilling.

In the 1970s and 80s, these type suits emerged in America. They followed years of social activism. They're called SLAPPs (Strategic Lawsuits Against Public Participation).

Plaintiffs use them to silence, intimidate or punish. They're used against outspoken individuals or groups. They target public activism.

Nine US states ban them. How effectively is at issue. Clever lawyers circumvent legal provisions. They find ways to do so.

SLAPPs are a strategic tool. They're used against employees "struggling against exploitation and deprivation, demanding their rights, or attempting to organize a union."

Enormous disparities exist between employers and employees. It's no fair fight. Plaintiffs can bankrupt defendants in the process.

Although many SLAPPs end inconclusively, they chill free expression. Defendants need costly legal representation. Requiring it gets some to withdraw.

Some victories end up symbolic. Time and expense go for naught.

Some lawsuits follow participation in public discourse. Generally it reflects something of common interest. It may be worker rights, pollution, taking over public lands, or faulty products.

SLAPPs by their nature are chilling. No one wants to be sued. Plaintiffs consider "the likely damage to the public's willingness to participate in public discourse whether the plaintiff's intentions are malicious or pure."

Most SLAPPs reflect other characteristics:

• Defamation: They're based on Anti-Defamation Law grounds

• Local disputes: the more local, the smaller the number of people willing to influence public action.

• Absurd claim amounts: some are unconnected to damage caused.

• Baseless, borderline or negligible suits: SLAPPs rest on shaky grounds. Some courts reject them. At the same time, defendants must enlist legal help.

• Warning and threatening letters: Sending them intimidates enough to silence.

Democracy dies in shadows. Sunshine is the best disinfectant. SLAPPs deter its effectiveness. They divert arguments from public space to courts. Ordinary people are greatly disadvantaged.

According to ACRI attorney Avner Pinchuk:

"(W)e are witnessing libel claims with a weak or even outlandish basis, yet which are an effective silencing measure against social and environmental activists who speak on matters of public importance."

"Though the court seeks in the course of the trial to maintain a balance between freedom of expression and the right to maintain one's good name, it fails to see the big picture."

"(S)uing for libel, or writing a letter threatening such a suit, is an inexpensive procedure through which powerful forces succeed in deterring civic participation, placing their critics in a defensive position and preventing or dampening public dialogue on issues of importance."

"If we don't recognize this phenomenon and develop tools to deal with it, then we are abandoning the public and strengthening those who have the power to silence their opponents."

Haaretz addressed the issue. Its editorial headlined "Speak out against silencing."

It discussed a disturbing reality. Growing numbers of people fear "participat(ing) in public discourse due to fear of being sued and becoming embroiled in lengthy, expensive legal proceedings."

"This is a serious blow to the already fragile fabric of democratic life in Israel." Many examples reflect what's ongoing. Mayors sue opposition councillors.

Restoring free expression needs to be prioritized. It's too important to lose. It's eroding because powerful interests target it.

Israel's most extremist government in history won't help. People are on their own to demand better. It's their struggle to win or lose.

1 Comments in Response to Eroding Free Expression in Israel